Posted on 17 January 2013 by Defending History

The Lithuanian government sponsored “International Commission for the Evaluation of the Crimes of the Nazi and Soviet Occupational Regimes of Lithuania,” known for short as the “Red-Brown Commission” has recently added a new layer of obfuscation and opacity to its activities.

Its website has deleted the names of the “Members of the Commission” thereby rendering it a kind of “secret society.”

Posted on 1 January 2013 by Defending History

Posted on 1 January 2013 by Defending History

Shock of 2012:
When a NATO-EU Ally Reburied and Glorified its 1941 Nazi Puppet Prime Minister who Signed Orders for Kovno Ghetto

The Disquieting 2010-2012 Record of the American Embassy in Vilnius, Lithuania

Posted on 18 October 2012 by Defending History

Posted on 25 September 2012 by Defending History

Posted in Documents, It Pays to Defend History: Success Over the Years..., Lithuania, News & Views, Politics of Memory, United States, US State Dept Manipulated? | Comments Off on Three United States Congressmen Write to Lithuanian Prime Minister on the Reburial and Glorification of the 1941 Nazi Puppet Prime Minister

Yad Vashem is Pressed by Foreign Ministry to Join as Holocaust Survivors Protest, after Years of Dissent; Rapid Descent into Morass of Lithuanian-Russian Politics

The following is the text of the statement released today by the signatories enumerated below.

Welcome to Holocaust Halloween: The Political Obfuscation of the Holocaust in Lithuania by Lies, Masquerades, Tricks, and Treats

The Soviet occupation of Lithuania is a painful part of its history.

The mass murder of approximately 95% of Lithuania’s Jewish population (noted by historians as the highest percentage of any European country) during World War two is an abomination and blot on the history of Lithuania and its citizenry.

The two events are not equal. Historical sufferings are not identical.

The United Nation’s Human Rights Committee in its 11 July 2012 report, issued in Geneva,  included the following text concerning the Lithuanian government’s arguments regarding the legalization of public swastikas and the ongoing authorization of neo-Nazi parades:

In May Lithuania celebrated the return of the ashes of the Nazi puppet prime minister of June, 1941, Juozas Ambrazevičius (who changed his surname to Brazaitis as a matter of convenience when he began using papers issued to one Brazaitis). The schizophrenic nature of the events were evident from the start, from the Kubilius government’s resolution allocating 30,000 litas in funding to celebrate the Lithuanian Nazi which, several items down the list, also allocated 3,000 litas for a project to “name the names,” to draw up a list of Lithuanian Holocaust victims, in conjunction with the Yad Vashem institution in Jerusalem.

The dissociative shell game continued when the government and state institutions sought to pawn off the events they financed on other institutions: the Catholic Church of the Resurrection of Christ in Kaunas, and an “academic conference/commemoration” planned at Vytautas Magnus University in Kaunas. After a scandal broke and former professor now MEP Leonidas Donskis published an eloquent protest on DH, the rector of VMU, who didn’t want the heat, told the Nazi celebrators to find another venue, one supplied by the Kaunas municipality, the chambers of the Kaunas city council. Then, in keeping with the theme of schizophrenia, VMU decided to allow another “academic conference” on university premises, initially with the exact same list of speakers as the banned event.

Reporter Andrius Makauskas, in a substantial article in yesterday’s online edition of the respected daily Lietuvos žinios (Lžionios.lt, “Lithuanian News” which is not to be confused with the antisemitic, ultranationalist Vakaro žinios, “Evening News”), makes the sensational claim that the rector of Kaunas’s Vytautas Magnus University (VMU) was untruthful when he told parliament last week that he and his university had not been given advance notice of plans to use VMU premises for a 19 May 2012 “memorial conference” honoring the 1941 Nazi puppet “prime minister” Juozas Ambrazevičius (later Brazaitis).

The 1941 Nazi-puppet prime minister had signed orders for “all means” against the Jews (though asking for a halt to “public executions”), for setting up a concentration camp, and for herding “all of the Jews of Kaunas” into a ghetto within four weeks (English here).

Members of Lithuania’s small and fragile remnant Jewish community were left in shock as word was spreading that quite secretively, the country’s prime minister and culture minister personally signed off this past March on the 30,000 litas allotment for the expenses of reburying and honoring the wartime fascist leader, Juozas Ambrazevičius (later Brazaitis). Ambrazevičius, as the Nazi puppet “prime minister” during the first weeks of the war in 1941, signed the orders confirming “all means” against Jews (though calling for public executions to halt), for a concentration camp for Lithuania’s Jews, and for the herding of all of Kaunas’s Jews into a ghetto within four weeks (English translation here).

The Lithuanian Jewish Community, in partnership with the Vilna Gaon Jewish museum, has issued a statement of protest against government sponsorship of the events.

Posted on 30 April 2012 by Defending History


[Updated 3 May 2012] The following is a reprint, including comments up to today, of the 13 April 2012 VilNews.com article “First-time event in Chicago this Sunday, April 15, to address lingering issues affecting Lithuanian-Jewish relations.” This page, as posted today [3 May 2012], is also preserved in webpage format here.

Rabinowitz-Dorf: Did the PR firm sell out Lithuanian Jewry to help the current right-wing government “change” the history of the Holocaust with American Jewish cover, while enabling “Fake Litvaks” to  misrepresent themselves as representing the Jewish community in Lithuania?

The following news box was posted on page one to the end of 15 April 2012:

“Sunflower Litvaks” who “resell”  Lithuanian Foreign Ministry “Holocaust history” ran a key PR event Sunday 15 April in the Windy City. Their claim that the Lithuanian Jewish Community was represented is refuted by the actual LJC in Vilnius.

Posted on 24 March 2012 by Defending History

The Baltic state-sponsored political infiltration into supposedly independent academic bodies concerned with Holocaust studies and education came into sharp focus in Washington this week with leakage to the media of a number of letters from Artūras Vazbys, Minister Counselor at the  Lithuanian embassy in Washington DC. The identical letters read:

Once Again, Moral Abdication at the American Embassy in Vilnius?

Posted on 10 March 2012 by Defending History

In contrast to its potent and convincing public response to neo-Nazi events in the center of  Vilnius in earlier years, the current leadership of the American embassy in the Lithuanian capital has followed a pattern disturbing to many Americans, of failing to even mention what America’s values are in commenting in official communications on both a neo-Nazi march and a pro-tolerance march, both scheduled for tomorrow, Lithuania’s independence day.

Posted on 27 January 2012 by Defending History 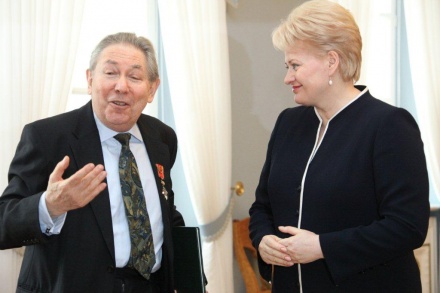 With the president: Professor Antony Polonsky wearing the Cross of the Officer of the Order for Merits to Lithuania. Photo: Džoja Barysaitė

VILNIUS—Professor Antony Polonsky of Brandeis University, one of the world’s most accomplished scholars of Polish-Jewish history and the long time editor of the seminal Polish Jewish history series Polin, was at the Lithuanian president’s palace today to receive from her excellency the prestigious Cross of the Officer of the Order for Merits to Lithuania. The award, pinned on his chest by President Dalia Grybauskaitė, was not for a lifetime of sterling work on Polish Jewish history, but it seemed, for several years’ staunch and perhaps somewhat naive loyalty to the public relations program of the current government of Lithuania, organized by the local Holocaust revisionism elite’s alleged top handler of “important foreign Jews,” Prof. S.arunas Liekis. The presidential press release, reported in English by Baltic News Service (BNS), put it this way: