Engines of Holocaust Obfuscation and the ‘Double Genocide Industry’

Three state commissions are dedicated to the ‘equalization’ of Nazi and Soviet crimes as a project for the European Union. In practice, they frequently serve as the administrative and political engine of the ‘Double Genocide Industry’. Much of their ‘material’, however, is derived from their partners in the DG Industry. These include the various  state-sponsored ‘genocide research’ centers, museums, exhibitions, publishing concerns, tourist sites and ‘special prosecution’ units. While lip service is paid to alleged ‘equality’  of Nazi and Soviet crimes for the benefit of the European Parliament and western visitors, the de facto domestic agenda is to stress only Soviet crimes which are presented as ‘genocide’; to ignore or downplay the Holocaust; to stress alleged Jewish involvement in Soviet rule; and to find ways and means to fault the Holocaust’s victims and survivors, especially anti-Nazi partisan veterans (see Blaming the Victims). In the context of all the foregoing, these commissions have occasionally also sponsored genuine Holocaust Studies projects, whose integrity is however ipso facto compromised.

In July of 2011, the director general of the ‘International Commission for the Evaluation of the Crimes of the Nazi and Soviet Occupation Regimes in Lithuania’ gave a speech to the country’s parliament that reflects on the Commission’s view of ‘Holocaust Education’ in 21st Century Lithuania

CRITIQUES OF THE COMMISSION 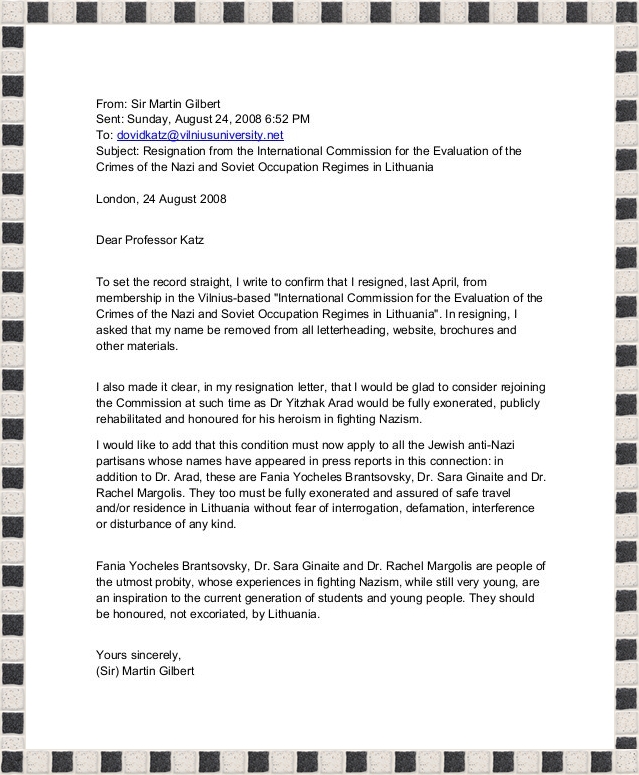 See also Critiques of the Commission

Some officials of the Commission complain about treatment in the European Union; BNS report (15 April 2008).

The Seimas proposes the equivalence model for the European Union (30 Sept 2008).  As PDF.

The chairman of the Commission was a Founding Signatory of the Prague Declaration [see page 4].  As PDF.

The Commission urges the Seimas to take up the Prague Declaration (21 Feb 2009).  As PDF.

The Commission speaks for Lithuania at the Prague Declaration sessions (e.g. 18 March 2009).  As PDF.

The Commission spearheads the effort to persuade the European Parliament to adopt ‘equivalence’ of Nazi and Soviet crimes; BNS report (13 Oct 2009).

The Commission has the text of the Prague Declaration on its website; Lithuanian version.  As PDF.

Two resignations from the Commission (Dr. Yitzhak Arad and Sir Martin Gilbert), on matters of principle  (listed as ‘memberships suspended’ on the ICECNSORL site).  As PDF.

The Commission’s executive director gives the final speech to a conference in the Lithuanian parliament revealing its true agenda (30 June 2011).

Professor Konrad Kwiet annountces his resignation from the Commission’s committee of experts (13 July 2011).

The chairman (left) and director general / executive director of the Commission seem to be looking in different directions at a commemoration for the murdered Jews of Plungyan (Plunge) in western Lithuania (17 July 2011).

The executive director of the Commission gives an interview in 2012 explaining his doubts that Jews were killed “on a racial basis” before the arrival of German forces in 1941.

The Commission holds another international conference on the crimes of both totalitarian regimes at the Lithuanian parliament (November 2012).

The executive director of the Commission calls a prominent Vilnius Holocaust survivor a ‘liar’ for correcting an error made at one of the commission’s conferences (February 2013).

The Commission’s website offers this diagram of its organizational structure, but with no mention of these many political activities in the European Parliament and elsewhere in the service of red-brown politics.

See also: Critiques of the Commission

Critique of the Commission:

ESTONIAN INTERNATIONAL COMMISSION FOR INVESTIGATION OF CRIMES AGAINST HUMANITY

Critique of the Commission: