Posted on 21 February 2013 by Defending History

Somebody’s idea of “tolerance education”? Extract from the official website of the “International Commission for the Evaluation of the Crimes of the Nazi and Soviet Occupation Regimes in Lithuania” (known for short as the “red-brown commission”)

Educators, diplomats, historians and journalists thought they had seen it all when it came to Holocaust-in-Lithuania issues in recent times. But an online attack by the state sponsored “history commission” on a local Holocaust survivor, Professor Pinchos Fridberg, who is deeply involved in honoring righteous Lithuanians who saved a Jewish neighbor, because he expressed his views against distortion of the Holocaust? That is a bit much even for here.

See Chronology of a Debate and what Pinchos Fridberg actually said…

The wider scene in the region includes state-sponsored efforts aimed at the downgrading and trivializing of the Holocaust into one of two supposedly “equal genocides”; defamation of the few survivors who managed to escape to join up with the anti-Nazi resistance; and, perhaps most incredibly the campaign to memorialize and glorify the actual local perpetrators of Nazi crimes and their collaborators.

In 2012 authorities repatriated the remains of the 1941 Nazi puppet prime minister, Juozas Ambrazevičius (Brazaitis), who signed papers confirming the order for thousands of Jews of his own city, Kaunas (Kovno) to be sent to a murder camp (called a “concentration camp”) and some weeks later, the order for the remainder of his city’s Jewish citizens to be incarcerated in a ghetto. He continues to be honored at Vytautas Magnus University in Kaunas, where a leading professor told the world that the reburial underscores “the drama of Lithuanian history” (while kindly noting that some were afraid to honor the Nazi puppet PM only because the thought they’d get clobbered over the head with a club by “the Jews”). 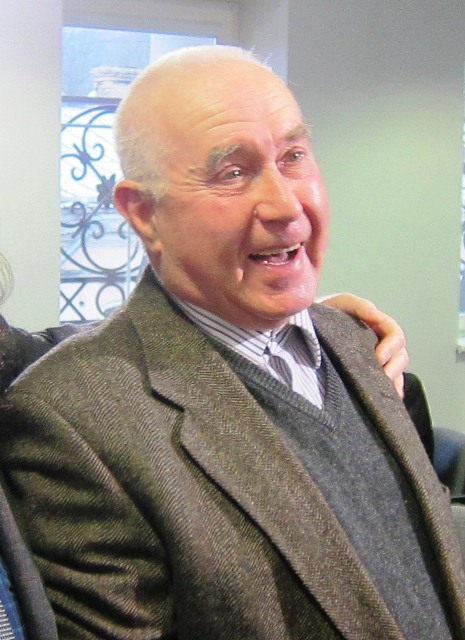 When it comes to the primary project — the writing of the Holocaust out of history without denying a single death, via the sophisticated Double Genocide campaign — there has been a massive investment to export this revisionist history to the rest of the European Union, most infamously via the 2008 Prague Declaration.

But this week, something sensational and first-time-ever came into play. A state-sponsored commission’s website called a beloved Holocaust survivor who continues to live at the scene of the crime and his murdered relatives and ancestors, right in the nation’s capital, a “liar” because he had spoken up against the Double Genocide campaign and had exposed as less than accurate an aspect of one paper delivered at  a conference held last November at the Lithuanian parliament.

The official website of the state-sponsored commission defames Holocaust survivor Professor Pinchos Fridberg by name. Officially, the commission is called (this is quite out of Orwell) “The International Commission for the Evaluation of the Crimes of the Nazi and Soviet Occupation Regimes in Lithuania” but is known in European diplomatic circles for short as “the red-brown commission” or the “Zingeris-Račinskas commission” (official website; Defending History page and DH section). It is one of the primary engines of disseminating and supporting the Prague Declaration, domestically and throughout the European Union.

The outburst against the named Holocaust survivor is not anonymous. It is proudly signed by the commission’s executive director, Ronaldas Račinskas. The target, Professor Pinchos Fridberg, had dared to disagree with the red-equals-brown policy of the commission and had correctly pointed out a major historic error promulgated at a November 2012 conference; he made both points in a polite article published in various Russian publications, and in English translation in the Algemeiner Journal, Operation Last Chance (Simon Wiesenthal Center), Defending History and indeed, on the website of the Jewish Community of Lithuania.

Note that the same page that calls a prominent Holocaust survivor and retired professor a person who “purposely spreads lies” has a map to the left boasting of the “tolerance education network.” Is this the “tolerance” these pupils are being taught toward the tiny handful of Holocaust survivors still alive in Lithuania? Are they aware that another Vilnius born survivor, Dr. Rachel Margolis, is afraid to return for one last visit after threats from prosecutors?

Incidentally, one of the most revealing aspects of this webpage is not even about the ostensible point of any argument. It is about the nature of antisemitism and group prejudice. There is a quibble or disagreement with a Jewish person, but the executive director of the commission is in effect asking for an “apology” not from the person he is disagreeing with but rather:

“open letter addressed [to the] Jewish Community of Lithuanian [sic] asking for the apology for disrespect” etc. etc.

In other words, Mr. Račinskas wants the Jewish Community of Lithuania (or does he mean “the Jews in general?”) to apologize for one individual having expressed a view contrary to his commission’s about something? Are these the commission’s values? Values that should be supported by the International Task Force (ITF) on Holocaust Education, Yad Vashem, the US Embassy and others who represent the best instincts of the free and democratic world?

Mr. Račinskas has used a disturbing tone in talking about the Holocaust to major Lithuanian audiences, for example at the nation’s parliament in 2011, or a radio show stacked last year against Social Democratic members of parliament who bravely signed the Seventy Years Declaration.

In the newest outrage, but this time on the commission’s official site and in English, Mr.  Mr. Račinskas writes (the quote that follows is unabridged and unedited from today’s published version, also preserved as screenshot for posterity):

Ronaldas Racinskas, Executive Director of the International Historical Commission addressed several electronic mass media portals and asked for the apology for the article written by Pinchos Fridberg “Instead of Truth about the Holocaust – Myths about Saving Jews”.

Due to the fact that author in his article purposely spread lies about the departed rescuers, proclaiming them non-existent, Janina Bucevičė (Telšiai Bishop Vincentas Borisevicius Gymnasium History teacher, who organized the conference for teachers and students to commemorate the 70th anniversary of Telsiai ghetto annihilation on the 12th of October, 2011, mentioned in the article) with the open letter addressed Jewish Community of Lithuanian asking for the apology for disrespect to rescuers of Jews and the Holocaust victims.

In the name of Janina Bucevičė and himself R. Racinskas asked mass media  to review their websites with the offensive article and publicly oppose misstatement, and offer an apology to the relatives for proclaiming the rescuers non-existent and to the saved victims of the Holocaust, and the other people who were insulted in this article.

Because mass media portals mentioned earlier present them as media voice with moral clarity, R. Racinskas expressed belief that this media assume all responsibility and standards of free and democratic press. Executive director of the International Historical Commission also expressed hope that in this particular case media will not stand behind formal no-responsibility for the opinion of bloggers and authors; and at least will publish open letter of Janina Bucevičė on their websites.

Far from denying the inspirational heroism of Lithuanian rescuers of Jewish neighbors in Holocaust times, Professor Pinchos Fridberg devotes much of his life to identifying, commemorating and helping arrange practical support for the families of rescuers. He does perhaps more than any other individual on this planet to help the inspirationally brave Lithuanian rescuers and their families.  His own article, incidentally, against which the commission now rails, contains the line: “Hirsh, my wife’s father, and her grandfather Joseph died in Dachau, her grandmother Sterle in Salaspils. My wife Anita was a prisoner (Ausweis #4426) of the Kaunas Ghetto. Subdued by a sleeping pill, she was taken out of the ghetto in a bag of rotten potatoes by Righteous among Nations Bronislava Krištopavičienė, zikhroyno livrokho” [= ‘may her memory be blessed’ in classical Lithuanian Hebrew].

The fury against Prof. Fridberg comes from his expressing his disagreement with the Double Genocide politics of the commission and his exposure of a major specific error promulgated as fact about an alleged specific single rescuer family who allegedly saved 43 Jews in a single huge hand-made bunker in which a 44th was born. Prof. Fridberg pointed out that this specific rescuer of 43/44 people did not exist, and the director of education and “member of the International Secretariat” who gave the data to an international conference at the Lithuanian parliament in November could have ended this matter long ago by a simple statement of correction about the number and supply of the names. It has nothing to do with the existence of Lithuanian rescuers in general, whom Professor Fridberg has worked to honor and support in well-known contexts. Most recently, he has campaigned for rescuers to receive extra state pensions, and his efforts deserve credit for resulting in some doubling of pensions of rescuers.

In the meantime, the commission maintains its record of disrespect toward Holocaust survivors: Still not a a public, official word about its own founding member Dr. Yitzhak Arad, and the kangaroo “war crimes investigation” launched against him in 2006, years after Dr. Arad had been, in 1998, persuaded to join the commission; not a public word of protest against the defamation of Ms. Fania Yocheles Brantsovsky or Dr. Rachel Margolis (who cannot return to Vilnius at the age of 91 for one last look at her native town); or of Tel Aviv attorney Joseph Melamed, who was disturbed in August 2011 by agents of Interpol at the insistence of prosecutors in Vilnius over his 2009 book exposing the names of local killers, including names of perpetrators now honored by street names, bas reliefs, statues, squares and plaques.

Most recently, Defending History was honored to publish an academic paper by Dr. Arad that includes a history of the red-brown commission and its actual purposes on the intellectual and historiographical arena.

Fast forward to this week: the executive director of the red-brown commission publishes the calumny that Professor Fridberg “purposely spread lies about the departed rescuers.” This is part of a larger (coordinated or uncoordinated) campaign against Professor Fridberg. A few days earlier, the head of Baltic News Service (BNS), in a bitter personal attack against Simon Wiesenthal Israel office director Dr. Efraim Zuroff also claimed that Professor Fridberg had not really been a professor, mockingly putting the word in quotation marks in addressing the Vilnius-native Holocaust-survivor retired professor of radio physics (Professor Fridberg’s bio here).

Incidentally, DefendingHistory.com is an open and transparent forum, and this week published Ms. Bucevičė’s reply within one hour of its being received by our offices, following which the author sent her note of thanks.