Note: Digitization of deteriorating  audio-cassettes for this project (voices of the last Jewish natives of Mikháleshik, all now passed away) depends on donations, which are tax-deductible in the United States. But it costs nothing to send us material for the online Yizkor book in ready-to-post PDF format (info@yiddishculturaldictionary.org). Thank you. 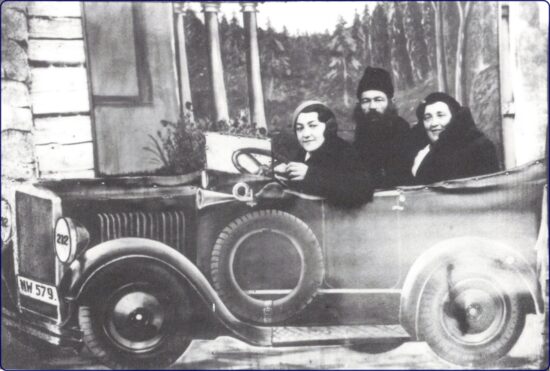 In Mikháleshik: Kháye-Rífke (left) and her parents Khóne-Vélvl and Khiyéne Rudnitzky enjoy some fun with the photographer in town for the day. Courtesy of the Esther and Edward Livingstone Family Collection (L.A.). From Mikháleshik photo section in D. Katz, Lithuanian Jewish Culture (2nd revised edition, Vilnius 2010, pp. 330-336).

After the death of my father Menke Katz in 1991, I embarked on a project to encourage the last survivors of Mikháleshik to write new memoirs and to sit for recorded audiotaped interviews. Mikháleshik, where Menke’s mother Badonna Gubersky (Badáne) was born and where her family lived for centuries was where Menke spent a vital part of his childhood, during World War I. Amidst the suffering of war, he was enchanted by its kabbalists, beggars and dreamers, which contrasted with the much larger county-seat town, Svintsyán (Švenčionys), where he was born. Mikháleshik (variously spelled Michalishek, Michaleshik, Michailishok and more, today: Mi(c)halishki, Belarus) is a focus of many poems in his eighteen books of poetry, nine in Yiddish and nine in English (a compilation of poems on Mikháleshik is in progress). He also published memoirs and historical work (in Yiddish and English) on language, folklore and watchmaking in the town, a book of children’s stories from the town (in English), and autobiographical memoirs. The plan was to gather the written memoirs and (transcribed) recorded interviews for a planned Yízker Bukh (Yizkor Book, book commemorating a destroyed East European Jewish town). The project never came to fruition, alas. I take personal responsibility for that. Departure from Oxford and relocation to Lithuania (with a year at Yale in New Haven along the way) took their toll, along with my failure to find support for an actual book (various commitments of sponsorship, as can happen, did not materialize).

Nevertheless, those peregrinations enabled me to seek out new informants, during trips to Israel (including several specifically for locating and taping survivors from the town and also from the region), and also in the New Haven area, where my own dearly loved Holocaust-survivor cousins from Mikháleshik all lived. They were the three children of near-legendary Watchmaker of Mikháleshik (and Holocaust survivor) Avremke (Abraham) Gubersky: Gershke (Gershon Perecman), Blumke (Blanche Kusovitsky) and Frumke (Frances Greenberg, the youngest, and in her own playful way, the most Mikhálishkean of all). Among the inspirational people they introduced me to in 1991, after my first visit to Mikháleshik (winter 1990-1991), was Berke (Boris) Klor. Berke had spent decades on his map reconstructing where every Jewish family lived. See his entry in the Contents for the complete map. He then spent years fulfilling my own request that he add in contrasting ink the names of the families who had previously lived in each house, before or during the First World War, i.e. the Mikháleshik of my father’s books and tales, and ipso facto, adding a generation or two more of historic depth. Berke Klor introduced me (by letter) to Fayvl Yavitsh Alvin (Philip Alwin) of Glenview, Illinois, whose many written memoirs, sent over the subsequent years, would themselves make for a fine Yiddish book. Berke also took me to meet Urke Blacher (Jorek Blocher) who sat for hours of taped interviews and sent in Mikháleshik memoirs for years. The plan is for all the written memoirs to be scanned and the audiotapes digitized for linking on these pages. 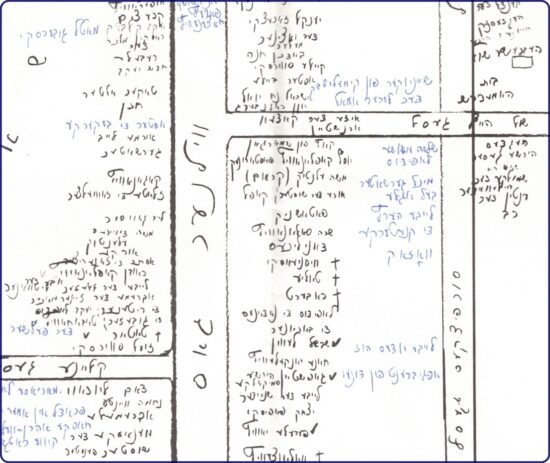 Now, at the wise suggestion of my friend and colleague, the master genealogist and guide Regina Kopilevich in Vilnius, I shall be looking to assemble all these materials online. First, the written memoirs that people sent me. Then there are the videos, starting with Avremke Reyn (Rein) in Mikháleshik (Dec. 1990), and dozens of hours of tapes that await restoration and digitization, hopefully one day soon, among hundreds of hours still undigitized in the LYVA project (note: all the remaining undigitized Mikháleshik tapes are audio cassettes). Contributions, urgently required to preserve these unique materials from further deterioration and loss, are tax-deductible in the Unite States. In addition, this project lists the extant published sources, which in recent years include a chapter on the town in a major book by former Obama speechwriter Adam P. Frankel, a grandson of Gershke Gubersky (Gershon Perecman), and great grandson of Avremke Gubersky.

The overriding goal is to save (and bring together) primarily the materials in danger of loss to posterity: the taped audio interviews (where digitization awaits funding support) and the manuscripts (where digitization slowly proceeds at no cost via the wonders of our times). In both instances (Yiddish tapes and Yiddish memoirs), this project is limited to rescue and posting, free and without log-in, for the study of future generations. In other words: as unedited, unadorned raw material in the original Lithuanian Yiddish of these wonderful people, all of whom have now passed away. It must remain for others to organize keying in of manuscripts, production of transcripts of tapes, translations, select excerpts, indexes, subtitles, and so forth — maybe one day even the hard covered book in Yiddish and other languages that these last survivors dreamt of for the town they so loved and were so proud of.

In modern Jewish culture, Mikháleshik figures prominently in the background or life of, among others, the Vilna-based founder of modern Hebrew poetry, Ódom Ha-Kóyhen (Adam Ha-Kohen, where “Adam” is an acronym in which “M” stands for: Mikhálishker); the rabbinic author Rabbi Shabse Faynberg (Shabbethai Feinberg); Yiddish and Hebrew author Abba Gordin;  Yiddish and English poet Menke Katz; Yiddish author S. D. Levine. The last “king of Yiddish poetry,” my close friend Avrom Sutskever never failed to mention that though born in Smargón to the south, he was the grandson of Shabse Faynberg, and therefore a Mikhálishker éynikl: a grandson of Mikháleshik.

My deepest gratitude to all those who provided the materials for this collection, and also to the folks of both the near and unseen future who might enable the subsequent stages of the project’s development.

Note: Mikháleshik origin family genealogy and historical ‘packets’ can be included in this Yizkor Book project if all materials are combined into a single PDF with a brief description for the Contents (emailed to: info@yiddishculturaldictionary.org). Thank you.

Map of Mikháleshik and its Jewish People by Berke Klor (Boris Klor). Note: For decades after the war, Berke Klor assembled data for his hand made map of Mikháleshik, aimed at recording every Jewish family’s name(s) in each residence. When we became friends in the early 1990s, I asked him to add (in contrasting ink) the names of the families that lived there beforehand, in many cases before the First World War, i.e. in my own father’s memory (and writings). He spent years working on that “little” request. Version at USHMM.

Urke Blacher (Jorek Blocher) (30 pp); Note 1: Hours of audiotape (some damaged) from 1991 etc. of interviews with Mr. Blacher about his native town were located in Sept. 2022. These will be restored, digitized and posted in LYVA as soon as the necessary support becomes available. Note 2: See also Jorek Blocher papers and his documents and diary at EHRI.

How I ‘Bought’ the Russian Prosecutor by Urke Blacher (Jorek Blocher) (6 pp.)

Book of Mikháleshik Stories (‘Forever and Ever and a Wednesday’) (in English) (The Smith: New York 1980)

Language and Folklore in Mikháleshik (in Yiddish) (9 pp.)

On Watchmaking in Mikháleshik (in Yiddish) (15 pp.)

Menke Katz’s Last Letter to his Son (…on Mikháleshik) (1. p)

THE MURDER OF YÁNKELE, SON OF CHAIM THE SMITH (WEINSTEIN) BY ANOTHER JEWISH TEENAGER OVER A GIRL’S AFFECTIONS

One set of facts and two opposing narratives

The Murder of our Cousin Yánkele (by a Jewish Teenager) by Menke Katz (6 pp.). Note 1: Eltshik lived in Svintsyán, not Mikháleshik; he was buried in Mikháleshik, at which point Menke remained there for several years, during World War I; Note 2: Murder of  Yánkele: Memoirs, recorded interviews, and perhaps surprisingly, Christian witness statements recorded among the oldest residents in 1990-1991, provide a wealth of material on the murder of young Yánkele (Jacob) Weinstein, son of Chaim der Shmid (Chaim Weinstein) and Báshe Gubersky Weinstein (she was the sister of Aaron-Velvl Gubersky). All versions agree that it was a Friday night winter knifing over a girl (1917? 1918?) but as in any shtetl, two principal versions developed (and no two versions agree on the name of the tennaged girl over which the deadly altercation occurred), and we are fortunate to have the witness recordings and these two written memoirs now included herein: this one by Menke Katz and the memoir (see just below in the Contents) by Fayvl Alvin (Philip Alwin), from the viewpoint of Itske the knife wielder (son of Hirshe-Khone the village feldsher or medic) which presents for the jury of history a robust self-defense scenario. Another version by Menke is in a published memoir (pp. 30-31). The detailed witness accounts audio-recorded in Mikháleshik, Israel and the United States will be added to this project as soon as resources enable digitization of the old and deteriorating cassettes. The killer eventually made it to California. Yánkele’s brothers who migrated to New Jersey tried for decades (in vain) to find him.

ON THE TOWN’S YIDDISH DIALECT

Photographic Memories by Gítke Lipkovits (Tova Danushevski) (10 pp.). Note: It is hoped that in this and the entry just below, higher resolution copies of these photos will be provided by relatives or descendants enabling them to be “reunited” with the survivors’ captions and texts provided for the present Yizkor book.

Afroymóre the Scribe’s Death and his Pronouncement on the Torah being Burned by Urke Blacher (Jorek Blocher) (4 pp.)

The Story of Janusz  (Yánishke) from the Tar Works (an effort to hide Jews from the Nazis) by Urke Blacher (Jorek Blocher) (8 pp.)

Last Will and Testament of the Six Million by Urke Blacher (Jorek Blocher) (4 pp.)

Numbered map (1 p.). Note: In the early/mid 1990s, we commissioned this map from a local photographer who also photographed these surviving in-situ stones. Even then, tips of mostly-buried stones both inside and outside the demarcated territory were visible to the naked eye, underlining the fragmentary nature of this effort. Layers of moss and fungus and other impediments made much of the lettering unreadable on the photographs. Piotr Ivanov of Ignalina produced a hand-written transcription of all these numbered stones. These materials will hopefully be added here at the earliest possible time. At some subsequent point, the cemetery was “restored” in a process that included (a) erecting a fence that would preserve a minimum, allocating all outlying areas to contemporary concerns or occupiers of the territory and (b) eliminating visibility of many stones partially buried outside the fenced area.

Astravetskaya Pravda (Belarusian regional newspaper in Astravets, current county seat town including Mikháleshik/Michalishki), published a commemorative article including an (incomplete) list of the Holocaust victims and deportees (7 May 2011).

Menke Katz in English: Dozens of poems on Mikháleshik in his nine English books; Autobiography; Forever and Ever and a Wednesday (children’s book of stories from Mikháleshik; The Smith, N.Y. 1980); Dovid Katz’s biography; Menke Katz’s poem Names of Michalishek in Commentary (Feb. 1959).

Translation of English poem on Mikháleshik into Belarusian.

Di Tsayt (Yiddish daily in Vilna/Wilno/Vilnius, from 1926: Tsayt), articles on Mikháleshik from Di Tsayt, 16 October 1925  and from Tsayt, 9 July 1926. Courtesy Roza Bieliauskiene (Vilnius), with thanks to Ruta Bloshtein (Mažvydas National Library of Lithuania) for providing images for the Yizkor book.