The Real Dope on the February 16 Neo-Nazi March in Kaunas (Kovno), Lithuania

Posted on 22 February 2013 by Defending History

Readers and supporters of Defending History likely realize there is a diversity of opinion and views held by contributors (made explicit on the About us page), and in that spirit I’d like to share my own impressions of the neo-Nazi march on Lithuanian Independence Day 2013 in Kaunas (Kovno), Lithuania’s second-largest city and the provisional capital in the interwar period.

First, Kaunas was colder than expected. The breeze contributed to the chill. There seemed to be half as many police as protestors at the staging area, Ramybės Parkas, next to the bus station in central Kaunas. The police wore three uniforms: green, grey and, I was told by someone representing himself as being from Interpol, a large number of plain-clothes officers dispersed among the crowd, presumably meaning the marchers, since the number of protestors was paltry, just a handful of people.

Contrary to Dovid Katz’s impression that the police in Kaunas did a knock-up job that day,the problems with the police began before the protest. Strictly there to observe rather than protest the march, I watched the police surround a young man, demand he unfurl his little banner for ideological scrutiny and then continue to harass him before he could reach the column of marchers assembling. Curious, I went to get a look at his banner, which he was now rolling back up into a cylinder, presumably because he wouldn’t be allowed near the march. I stood there trying to catch at least some of the inscription as he worked, and made out something about Mother Teresa.

The police then began to ask me, more or less, if I had a problem. They were clearly about to harass me next for just looking at what they were doing, and sounded violently predisposed. I answered in English, asking them what the banner said. I guess that identified me as a non-marcher to them, and I walked away, wondering how in the hell Mother Teresa could be censored under Lithuania’s non-functional laws banning swastikas and hammers and sickles.

Dovid Katz, always the diplomat and polite to a fault, in effect consented to have his picture taken with the same neo-Nazi who had sneered at him at the March 11 neo-Nazi march in Vilnius in 2012, and harassed him by trying to photograph his every gesture there at the staging area before the march. Perhaps Katz didn’t recognize him (or want to), but this set the tone for the rest of the march and the aftermath, when Julius Panka, leader of one of the three main fascist youth organizations, claimed the march had included people of Russian, Polish and even Jewish ethnicity. All this, while he was demanding an apology from Lithuanian Jewish Community acting chairperson Faina Kukliansky, for some statement issued. 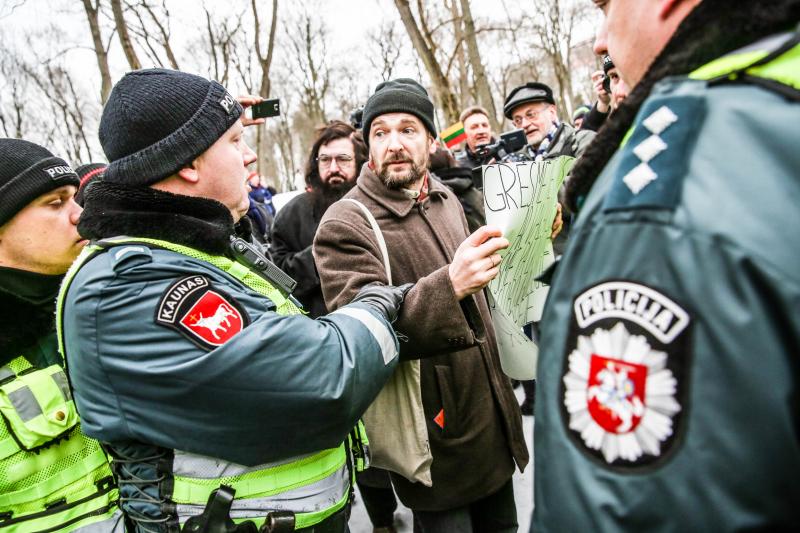 The police next chose to harass Defending History contributor Evaldas Balčiūnas, who arrived without fanfare and unfurled a piece of sheet with an inscription made with black felt-tip marker saying patriotism is dangerous. He was kicked by one of the marchers and then surrounded by police who physically pushed him off the sidewalk, long before he could be said to be blocking the column of marchers. He was physically assaulted by the marchers and the police for protesting. The police continued to harass him and other protestors who joined in later, and then all of them were again threatened by the neo-Nazis after the event was over.

Nowhere to be seen was Christine Beresniova, who claimed to have been at the Kaunas march last year, although no one saw her, and then to have been “debriefed” by US embassy Vilnius on the entire spectacle. Several people did poke their heads out of windows and over balconies as the march was about to culminate along one narrow section of street, so perhaps Christine Beresniova was one of them, and will again this year be there to supply her intelligence to US embassy Vilnius.

Efraim Zuroff arrived just about on time, just before the march began, and was immediately besieged by cameras and microphones. Some of the marchers confused Zuroff for Katz and vice-versa. Some elderly Nazis decided to verbally assault or parley with Zuroff in Lithuanian, not a very successful tactic.

As the march pulled out of Ramybės Parkas, a small group of three high school-age youths followed closely behind the police at the end of the column carrying a protest sign: “Citizen, you are taking part in a march of fascists.” No one noticed them, neither the reporters nor Katz and Zuroff. I pointed them out to Zuroff and we hung back so he could get a look at them. These three stopped at the Russian Orthodox church at the start of Laisvės Alėja, the main parade route, and then were interviewed by at least several reporters, and joined by about three friends of generally the same age. All six of them along with Evaldas Balčiūnas and his companion were later harassed by police in front of the Kaunas municipality building as neo-Nazis surrounded and jeered at them. 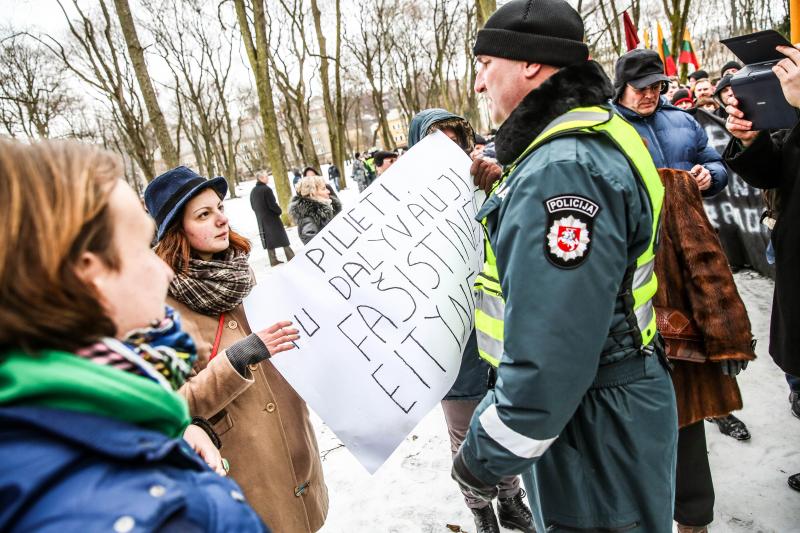 Zuroff was joined at the staging ground by four Israeli medical students studying in Kaunas, who accompanied him along most of the parade route. Another Israeli medical student appeared at the finally assembly point to take photographs as the neo-Nazis heard speeches from their leaders. At this point, two blonde girls—a little too obviously synchronously—approached Katz and Zuroff as they stood a way off from the maddening crowd of probably 200-300 neos clustered around their speaker on the square. One presented herself to Zuroff as a reporter and asked provocative questions, while the other attacked Katz, so to speak, making an emotional appeal with her eyelashes to the effect that patriots aren’t fascists and the marchers were all good people who loved their country.

Between the Kaunas municipality, where the public interrogation of the few protestors who appeared continued under the eyes of the neo-Nazis, and the square where the speakers spoke, Zuroff said several times, “Well, it’s almost over.” He took pains to separate himself from the march, so as not to appear as one of the marchers. Meanwhile, Dovid Katz was somewhere at the vanguard, apparently being spat upon by one elderly woman and taking photos of it all as is his wont, as if fulfilling the role of being able to “spoil” the neo-Nazis’ “holiday” with his very presence, as they have on multiple occasions accused him of doing.

Yes, it’s almost over, I thought, and every time that was repeated, I remembered other people, reluctant to march, of long ago, saying the exact same thing to one another. It’s almost over. We’re almost there. With the same hope and expectation in their voices. People marching to Ponár, and the Ninth Fort, and women marched through the night to the sand cliffs of Palmnicken in East Prussia.

The marchers were apparently under great pressure not to display any real swastikas and to limit their jingoism to “Lithuania for Lithuanians.” The police did seem ready to quell any neo-Nazi violence, but unfortunately chose to harass the small group of protestors rather than to keep a real eye on the neos during and after the march. The number of overall protestors and anti-march observers was 21 including the Israeli students and Chaim Bargman, the Jewish tourist guide and historian in Kovno who single-handedly ruined a second “academic conference” intended to honor 1941 Lithuanian Nazi puppet leader Juozas Brazaitis-Ambrazevičius in Kaunas last year. He made it his business to stay inside the police cordon defining the march per se in order to argue with its participants directly.

For the Lithuanian public and foreign allies, the recently yet again exposed idiocy that right-wing MP Emanuelis Zingeris represents the Jewish community, seemed to continue to lurk in the air. As if his own silence about the neo-Nazi manifestations with authorities’ blessings on independence day in the center of major cities are not an issue worth even mentioning. For many Israeli, American and European Jews and non-Jews, Emanuelis Zingeris is the  head of the Jewish community, always has been and always will be. And maybe he will be, one day, if all the far-right intrigues now underway win the day.

The police in Kaunas did not do a great job, they did a horrible job, they violated the rights of the protestors as well as the marchers, rights enshrined in the Lithuanian constitution since 1992. Twenty-one years on and Lithuania police and the security apparatus is unable to deal with a dozen active and another nine passive protestors at a fascist rally, much less able to deal with a real Gay Pride march in Vilnius. This is just pathetic, to say the very least. It’s ass-backwards, really. The funny thing is, to read Evaldas Balčiūnas’s own account of the Kovno madness, he had elderly fascists coming on to him.