2013: Professor Pinchos Fridberg, Adamant for Truth, is Defending History’s Person of the Year 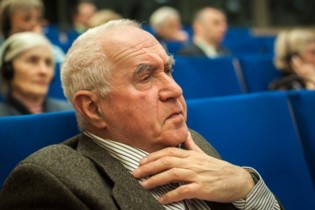 Vilnius Holocaust Survivor Professor Pinchos Fridberg has stood up with inspirational courage to the state sponsored “Double Genocide” industry that has targeted him. He was defamed by the head of Baltic News Service (BNS) and the “International Commission for the Evaluation of the Crimes of the Nazi and Soviet Occupation Regimes in Lithuania” (Red-Brown Com, for short), which still calls the survivor a liar on its website. More on the Commission here and here. An appeal to commissioners’ conscience has been issued.

See Danny Ben-Moshe’s op-ed in Jerusalem Report which touches on the somewhat bizarre (though wholly indirect) Yad Vashem connection to the saga.

Pinchos Fridberg is a real Litvak with real Litvak values and proverbial Litvak steadfastness when it comes to the simple truth of the matter, most emphatically when the matter concerns the destruction of Lithuanian Jewry during the Holocaust. He has also dedicated many years, since retiring from research in physics, to fight for the recognition and rights of Lithuanian rescuers (Righteous Among the Nations) who risked all to just do the right thing and save a neighbor. The strands of fearless steadfastness in pursuit of the facts, and the stylistic grace of one of the last of the Litvaks of Vilna, come together in his recent “Letter to Moses.”  To jump to a chronological listing of Professor Fridberg’s recent articles provided below please click here. His own contributions are color-marked for rapid reference.

“Neither I nor my wife Anita are specialist researchers of the Holocaust. We are simply witnesses saved by a miracle. Until the last days of our lives we will consider the Righteous to be saints, the only ray of light in the darkest world of murderers and collaborators like Juozas Brazaitis-Ambrazevičius, Antanas Impulevičius and Aleksandras Lileikis. In 1998, the International Commission for the Evaluation of Crimes of the Nazi and Soviet Occupation Regimes in Lithuania was formed by decree by the president. Everybody agrees that these two regimes have a lot in common and their crimes need objective and unbiased evaluation. However, I will never agree with the idée fixe […] of attempts to equate the Holocaust and Stalin’s crimes against the Lithuanian people. […] My wife Anita was a prisoner (Ausweis #4426) of the Kovno Ghetto […], she was taken out of the ghetto in a sack of rotten potatoes by Righteous among the Nations Bronislava Krištopavičienė, may her memory be for eternity a blessing.”

from his article published by the Algemeiner Journal, Defending History, Jewish Community of Lithuania,  and the Simon Wiesenthal Center’s Operation Last Chance

Pinchos Fridberg, a native and resident of Vilnius, is a Holocaust survivor. He graduated from Vilnius University in 1961 and completed his PhD in theoretical and mathematical physics in 1965 and an additional doctoral science degree in radio physics in 1974. From 1961 to 1978 he was chair of the Laboratory of Theoretical Investigations at the Vilnius Scientific Institute of Radio Measuring Devices. In 1978 he joined Grodno State University, where he was named professor. In 1989 he became head of the Department of Theoretical Radio Physics at the Zondas Company in Vilnius.

Note: This list includes only publications in English; a number of contributions first appeared elsewhere, in Russian or Lithuanian or both. DH translations always contain links to the originals (which are not listed below; this chronology is for readers of English).

PHOTO OF PINCHOS FRIDBERG AT THE NOV. CONFERENCE BY MINDAUGAS MIKULENAS

3 September 2012.  DefendingHistory.com: Statement by the Association of Lithuanian Jews in Israel on renewal of the ‘red-brown commission’.

21 November 2012:  DefendingHistory.com: ‘When the politicians run the conferences on — history’ by Evaldas Balčiūnas.

1 December 2012:  DefendingHistory.com: ‘The Holocaust in Lithuania, and its obfuscation, in Lithuanian sources’ by Yitzhak Arad.

5 February 2013:  Janina Bucevičė,  ‘Teacher from tolerance education center addressed Jewish Community of Lithuania with open letter’ on the website of the International Commission for the Evaluation of the Crimes of the Nazi and Soviet Occupation Regimes of Lithuania’. [See below at 19 February for edited republication in Defending History]

The Commission that provides ‘tolerance education’ calls Holocaust survivor a liar on its website and demands an apology from — the Jewish Community!

15 February 2013:  The International Commission for the Evaluation of the Crimes of the Nazi and Soviet Occupation Regimes in Lithuania: Statement by executive director Ronaldas Račinskas demanding apology from the Jewish community.

19 February 2013:  DefendingHistory.com: ‘Request for an apology for disrespect toward rescuers of Jews and Holocaust victims’ by Janina Bucevičė. [Editor’s note: The Commission’s executive director contacted Defending History asking for Ms. Bucevičė’s contribution (first posted by the Commission, see above at 5 February) to be published. After obtaining the author’s permission to edit some of the inflammatory language, her article appeared in DH, with final text approved by the author.]

14 March 2013:  DefendingHistory.com: ‘Isn’t it time for the author of the myth to apologize?’ by Pinchos Fridberg.

9 April 2013: DefendingHistory.com: ‘Lithuania paying with its image for the ambitions of an official’ by Pinchos Fridberg [translation posted 11 August of 9 April article].

18 September 2013: DefendingHistory.com: ‘An Old Jew from Vilna Writes a Letter to Moshe Rabeinu’ by Pinchos Fridberg.

. Reaction to a comment posted at Olga Zabludoff’s 13 February 2014 op-ed in the Algemeiner Journal.

1 March 2015.  Yiddish Forward: ‘Letter from a Vilna Jew to Yivo’s director, and his reply’ [by Pinchos Fridberg and Jonathan Brent] [in Yiddish].