Such foreign interest as there was in today’s event was largely sparked by authorities’ revocation, several days ago, of a separate permit for human rights activists to stage a counter demonstration. The neo-Nazis’ demonstration had a permit for a maximum of one thousand people, and the human rights activists’ event for a maximum of one hundred. Press reports confirm that several dozen human rights activists nevertheless held a small event today. US Fulbright scholar Christine Beresniova reported on that event on her blog, where she reports her contacts with the US Embassy, which failed however, to issue any statement with moral backbone reflecting American values. The event was also reported on by Lietuvos rytas.

Still, the three-person DefendingHistory.com team — Milan Chersonski, Ruta Bloshtein and myself — did not encounter a single evident anti-march or pro human rights demonstrator on the hour-long trek, nor at the rally that followed, which we observed to the end. Nobody came out to confront the neo-Nazis, not even with a polite single solitary sign, not even with a most innocuous signal of discontent.

The police were highly professional throughout the event. They must not be blamed for failing to arrest people brandishing public swastikas and similar fascist symbols when these are not currently against the law. A Klaipeda court’s ruling that the swastika is an innocent symbol of the ancient Lithuanian heritage is now repeated far and wide here, with few mentioning that it is mysteriously (or not-so-mysteriously) used in public marches only by neo-Nazis and fascists who openly campaign against Jews, Poles, Russians, Gays and other Others.

We had the pleasure of meeting with the widely respected journalist Nerijus Povilaities, whose interview and report on the march, and photos, appeared today in Lietuvos rytas  (English translation here).

The saddest part of the neo-Nazi march in Kaunas today was the list of signatures at the bottom of the ultranationalist leaflet distributed. It was signed by five current members of the Lithuanian Parliament.

Of the five parliamentarians, three — Čigrijienė, Songaila, and Uoka —are or have in the recent past been part of the ruling party, the Homeland Union – Lithuanian Christian Democrats faction, which is also the party of the country’s one “Jewish MP for show and tell,” right wing politician Emanuelis Zingeris, who was the only Jew in Europe to sign the Prague Declaration in 2008. [He was not on hand today to politely reply to those of his fellow party members who were among the keynote speakers.] MP Gražulis is from Order and Justice; MP Baškienė is listed as unaffiliated. 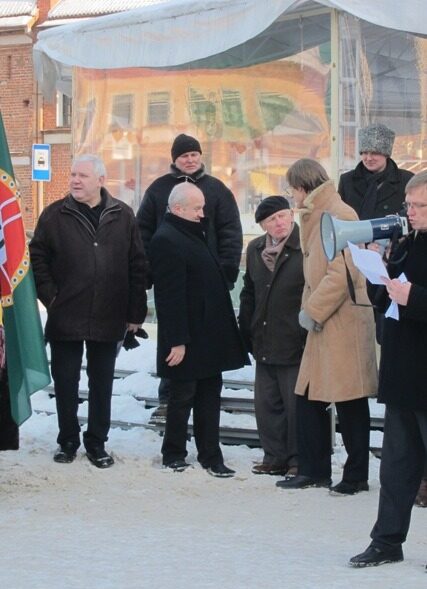 One of today’s keynote speakers, MP Songaila, at a recent hearing on “Double Genocide” at the European Parliament, sat with Conservative party stalwarts Vytautas Landsbergis and Mr. Zingeris, in a typical illustration of the coziness between the centre right and far right at the heart of many of today’s human rights, historical memory and democracy issues. This may explain the wall of silence about the Nazi marches coming from the current ruling party, despite expensive concurrent efforts to invest in “Jewish” projects for foreign consumption. It was announced today that Mr. Songaila plans to revive his own old nationalist party.

From the viewpoint of the Lithuanian Holocaust survivors interviewed at length in recent years, the most painful symbol brandished is not the swastika, which tends to rank as second. For survivors and their families in Lithuania, the white armband worn by the members of the Lithuanian Activist Front (LAF) and other groups of fascists is the symbol of the local, Lithuanian betrayal of their neighbors after many centuries of peaceful and usually harmonious coexistence. The “white armbanders” started butchering Jewish neighbors in dozens of locations in Lithuania before the first German forces set foot. They had even made their intentions clear in writing in leaflets prepared before the German invasion of 22 June 1941.

This is a telling example of overlap between neo-fascism and the sophisticated brand of sophistic “rewriting of history” that the governments of the Baltic states and others in Eastern Europe  currently invest in. During 2011, Lithuania’s government financed a series of events honoring the LAF. In the permanent exhibit of the Genocide Museum they are regarded as patriotic, heroic rebels who drove out the Soviets (an abject nonsense — the Soviets were fleeing Hitler’s invasion), with no mention of their “major accomplishment” — unleashing the Lithuanian Holocaust. This is even repeated in the new “Holocaust Room” finally added in late 2011 in a small cell in the museum’s basement.

DefendingHistory.com is placing on You Tube video excerpts of Holocaust survivor testimony on the white-armbanders’ activities in the hours and days following the launch of the German invasion of 22 June 1941. These are in Yiddish. The first of a projected series of English translations appears here.

Early 2012 has seen an inspiring gesture from eight Lithuanian parliamentarians, all Social Democrats (six MPs and two MEPs), who signed the Seventy Years Declaration which explicitly rejects the honoring of the LAF in Lithuania and of the Waffen SS in Estonia and Latvia. Instead of congratulating the eight parliamentarians, the current foreign minister has berated them.

All the more lamentable to see today the white armband being the chosen distinguishing mark for parade marshals who led in the shouting of “Lietuva Lietuviams” (Lithuania for Lithuanians), “Keep Lithuania Pure,” and other charming texts. Their white armbands were emblazoned with what is known locally as the “flaming swastika,” one of the neo-fascists’ favored symbols. Some of the white-armbanded marshals looked like rather tough gents. But at least one was a teenaged girl. 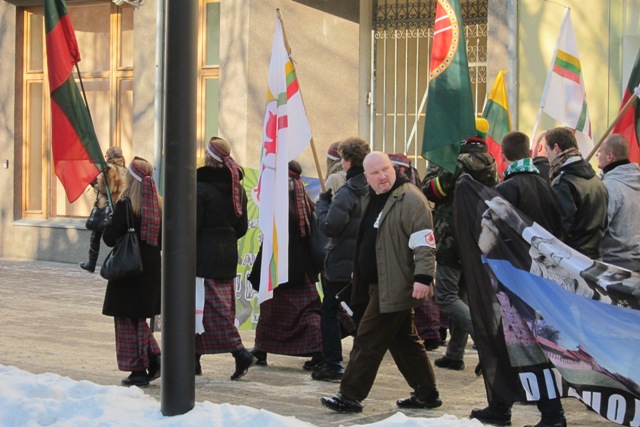 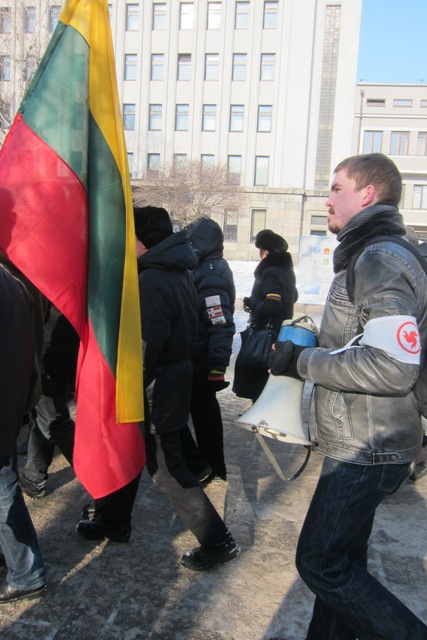 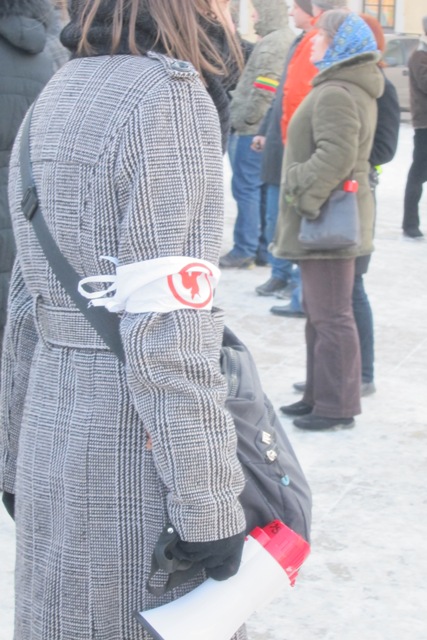 The only swastikas in view were embroidered epaulette “Lithuanian swastikas” (with extra lines symbolizing the Pillars of Gediminas, a medieval symbol related to grand dukes who were actually champions of the multicultural tolerance that made the Grand Duchy of Lithuania the great state it was). When police were asked why swastikas are tolerated the answers were (a) that a court ruled that they are legal, and (b) these are not exactly swastikas anyway. 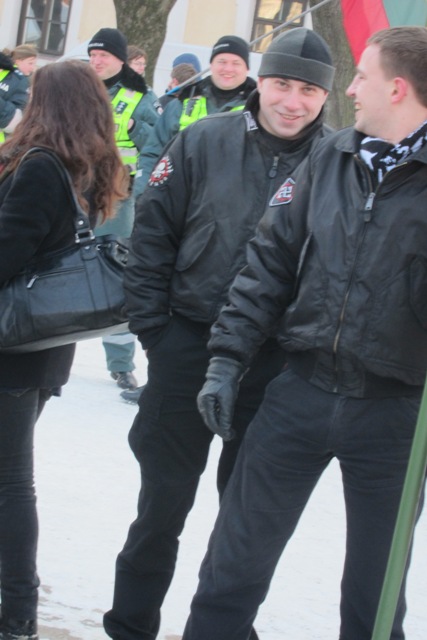 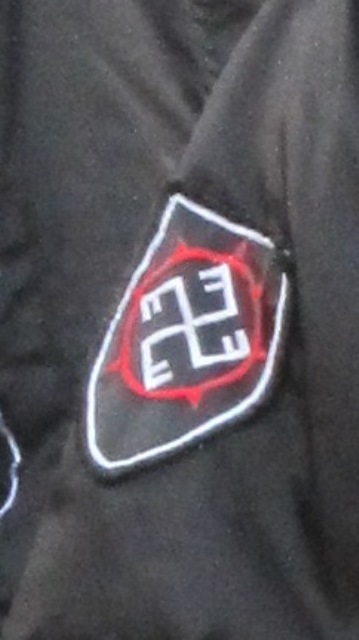 The symbol of preference on flags was the “flaming swastika” common in recent years. 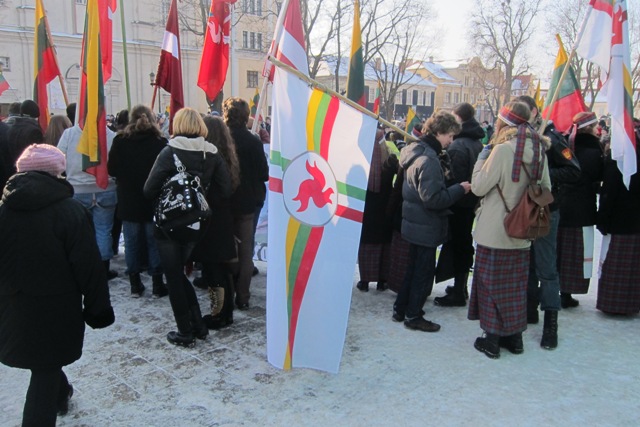 Then there was the “cute word play” of cosmonauts and cosmopolitans, which is a newly popular neo-fascist reference to Jews in the spirit of “rootless cosmopolitans.” The idea is that these cosmopolitans need to be launched into space, out of Lithuania… 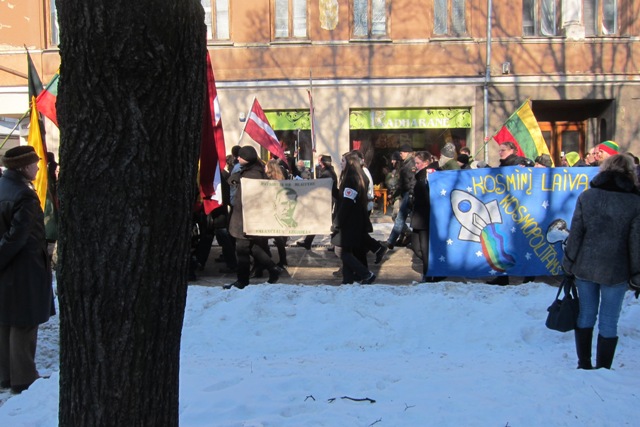 The “front poster” reads: “The European Union is temporary. The idea of the Nation is forever.” 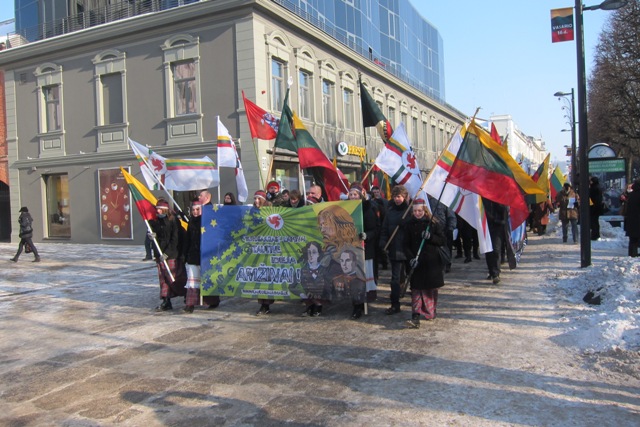 Not to forget current events elsewhere… This next sign below, reading “Hungary, Don’t Surrender!” is a reference to recent mainstream Lithuanian politicians’ advice to Hungarian leaders not to heed the warnings of the European Union about the dangers of the diminution of democracy and freedom under the current government there. 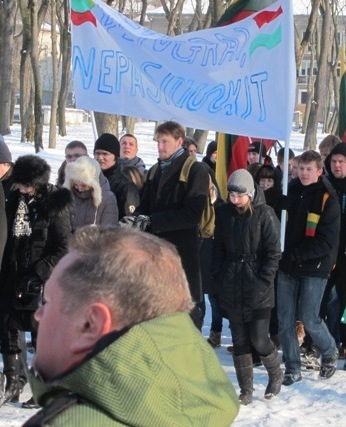 The paraders traverse one end of central Kaunas to the other, without a single voice of polite opposition from anyone at any point on the route. 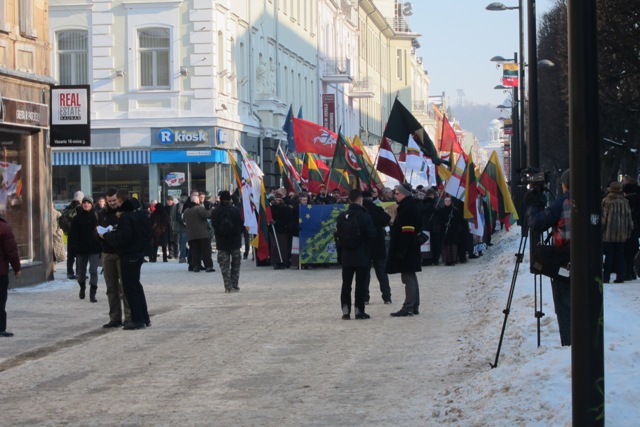 NOTE: Photos may be reproduced with credit to DefendingHistory.com.