Lithuanian Foreign Minister Berates his Country’s Parliamentarians who Signed ‘70 Years Declaration’; Says Hitler = Stalin Except for Length of their Moustaches

Posted on 22 January 2012 by Defending History


The foreign minister of Lithuania did not wait until the day was over.

“It is not possible to find differences between Hitler and Stalin except in their moustaches (Hitler’s was shorter).”

— The Foreign Minister of Lithuania, commenting upon the Seventy Years Declaration in the early hours of 20 January 2012, 70th anniversary of the Wannsee Conference

The day was January 20th 2012. The seventieth anniversary of the Wannsee Conference codifying the “Final Solution” — the annihilation of European Jewry. Lithuania had Europe’s highest percentage of Jewish citizens killed in all of wartime Europe, in some measure due to the massive local collaboration and participation in the killings of its Jewish population (which incidentally, made the inspirational courage of the rescuers all the more momentous). Given his government’s recent investments in “Jewish public relations projects” a solemn silence until the end of the day might have been expected. Or even a statement about the Holocaust which all but wiped out Lithuanian Jewry. After all the Wannsee Conference came right after “those six months” in which most of Lithuanian Jewry was massacred (with a minority kept alive for slave labor in four ghettos).

UK MP Denis MacShane writes (on 24 Jan.) to each of the eight Lithuanian signatories of the Seventy Years Declaration. The letter. Report (of 25 Jan.) here. MP Vytenis Andriukaitis replies to the foreign minister. Andriukaitis section.

Instead, according to a 20 January 2012 report on Lrytas.lt timestamped 8:26 PM (English translation here), foreign minister Audronius Ažubalis, via his spokesperson Margarita Butkienė, condemned the eight of his nation’s Social Democrats (six MPs plus two MEPs) who signed the Seventy Years Declaration launched by seventy European parliamentarians from nineteen European Union member states. The Seventy Years Declaration, issued to mark Friday’s anniversary of Wannsee, opposes “Double Genocide” and condemns Soviet crimes while making it clear they are not “equal” to the Nazis’ genocide. It also opposes the glorification of local East European Holocaust perpetrators and the legalization of public swastikas.

In fact, it appeared that the foreign minister did not even wait until the crack of dawn of 20 January. His statement was earlier the subject of a Lietuvos žinios (Lžinios.lt) report timestamped 3:53 AM (English translation here), less than four hours after the Seventy Years Declaration was published by DefendingHistory.com at midnight. The Lžinios.lt online version cites quotations in reply by two of the Social Democratic MPs who signed the declaration, Algirdas Sysas and Justinas Karosas.

“If we’re discussing painful matters, gas chambers and deportation, these are somewhat different things. People still used to come back from deportation, but usually not from the gas chambers.”

— Comment of Social Democratic MP Algirdas Sysas, in reply to the foreign minister’s attack on Lithuanian parliamentarians who signed the Seventy Years Declaration.

“The conservatives pushed this position, but it’s not one universally accepted in Lithuania. This is a kind of political gambit by the conservatives, this is their kind of battle. But Social Democrats have always seen it differently.”

— Comment of Social Democratic MP Justinas Karosas, in reply to the foreign minister’s attack on Lithuanian parliamentarians who signed the Seventy Years Declaration.

An elderly Holocaust survivor told DefendingHistory.com today: “For the first time in many years, I feel pride in some members of our parliament who now have the courage to stand up to the extreme nationalists who are trying in their own way to write the Holocaust out of history with their ‘Two Holocausts’ theory. These incredibly courageous parliamentarians are the true Lithuanian patriots and they make me proud to be a citizen.”

But the foreign minister called the decision to sign the Seventy Years Declaration “pathetic”. The minister goes on to accuse the founding signatories of the statement of “echoing the Kremlin’s ideologues: Stalin ‘good’ and Hitler — bad”.

Most sensationally, Foreign Minister Ažubalis goes on to say: “It is not possible to find differences between Hitler and Stalin except in their moustaches (Hitler’s was shorter).”

His statement goes on to list as irrefutable truth the various “red-brown resolutions” in the spirit of the (widely criticized) 2008 Prague Declaration, including the European Parliament’s (nonbinding) 2009 vote recommending a unitary day of commemoration of Nazi and Soviet crimes, and the OSCE’s declaration of July 2009. 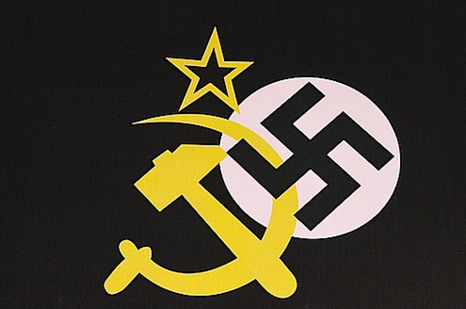 Image accompanying the Lžinios.lt report on the foreign minister’s reaction to the Seventy Years Declaration

Ažubalis’s diatribe accuses the Social Democrats who signed of going in a direction opposite to that of the trend in Europe using the red-brown movement’s 2008 and 2009 triumphs as evidence. But he did not mention that the momentum was sensationally halted in December 2010 when the European Union nixed the attempt to insert “Double Genocide” language in the Stockholm Declaration, referring in its report to the Montero Report, and the simple fact that there is no “one size fits all” for European resolutions on history. The Guardian reported on 21 December 2010. [That end-of-the-year 2010 reversal was more recently the subject of the October 2011 outburst by the right-wing MEP Vytautas Landsbergis at a European Parliament meeting.]

The Lithuanian right wing ruling party’s prominent (and in some views, compliant) Jewish MP, Emanuelis Zingeris, now the head of parliament’s foreign relations committee, has yet to comment publicly. He was the only Jew in Europe to sign the 2008 Prague Declaration that propelled the East European nationalist movement to “equalize” Nazi and Soviet crimes (“Double Genocide”; see summary of opposition). He is also the founding chairman of the highly controversial “red-brown commission” (see summary of opposition). There is also speculation as to whether his older brother, the eminent author Markas Zingeris, now head of the state’s Jewish museum and the formal “Advisor on Genocide” to the prime minister will be issuing a statement clarifying his own view. The Seventy Years Declaration includes a line on the definition of genocide.

Foreign Minister Ažubalis has never apologized for an antisemitic outburst of October 2010 at a meeting of his party faction in the Lithuanian Seimas (parliament) that drew an anguished reaction from the Jewish Community of Lithuania and has generated a substantial paper trail.

Earlier this month, Ažubalis’s predecessor as foreign minister, Vygaudas Ušackas, now the European Union’s ambassador to Afghanistan, was taken to task for having called Nazi rule “a respite from the communists” in a December 2011 article in the Wall Street Journal.

In the meantime, DefendingHistory.com has issued a statement congratulating the six Lithuanian members of parliament and two of its members of the European Parliament who signed the Seventy Years Declaration for their “extraordinary courage, integrity and true love of their country and European values”.