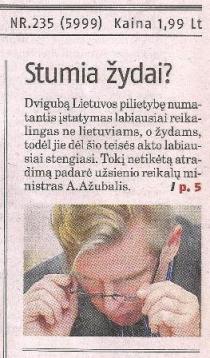 One of the ironies is that most Western experts believe Lithuania would benefit enormously in the spirit of Ireland and other countries, who have amassed an army of descendants around the world who are committed to the welfare, growth and economy of their ancestral homeland. But in the case of Lithuania, it would mean reaching out also to Jews of Lithuanian origin. Around 95% of Lithuania’s Jews were murdered in the Holocaust, the highest percentage in Europe, because of massive voluntary local participation in the genocide.

The foreign minister’s statements elicited a rapid reaction from the Jewish Community of Lithuania (15 Oct) and thereafter from the Simon Wiesenthal Center (18 Oct), and from Arkadijus Vinokuras (20 Oct), the prime minister’s official advisor on Jewish issues.

Less than one month ago, Foreign Minister Ažubalis visited the City University of New York and the YIVO Institute for Jewish Research, boasting of the Lithuanian parliament’s decision to declare 2011 a year of commemoration for Holocaust victims. Only hours after his departure, the Lithuanian parliament changed its mind and re-dedicated 2011 to all the country’s losses other than the Holocaust, while encouraging glorification of Holocaust collaborators whom the national far right is recasting as ‘anti-Soviet resistance heroes’. The country’s tiny but proud Jewish Community has spoken out forcefully (see here and here).

RESPONSE OF THE JEWISH COMMUNITY OF LITHUANIA (14 Oct)

PUBLISHED VERSION OF THE RESPONSE IN JERUSALEM OF LITHUANIA

MINISTRY GOES ON TO CRITIQUE FEELINGS OF COUNTRY’S POLISH MINORITY