A sensational front-page story in today’s Lietuvos rytas, Lithuania’s main national daily, reports that the foreign minister, Audronius Ažubalis, told his ruling party colleagues at a meeting that ‘the new law [regarding possibilities for dual citizenship] was being pushed by Jews who seek citizenship on order to press compensation claims against the state’.

The front-page headline and summary (image at right), announcing the full story that follows on page 5, translate as follows:  ‘ARE THE JEWS PUSHING IT? The law foreseeing double Lithuanian citizenship is necessary for the most part not for Lithuanians, but for the Jews, and that is why they are doing their best for this law. This unexpected discovery was made by Minister of Foreign Affairs Audronius Ažubalis.’

The main page 5 story is headlined ‘Foreign Affairs Strategist Sees a Conspiracy of the Jews’. The report includes the text: ‘The law foreseeing double Lithuanian and other foreign citizenship is mostly necessary not for Lithuanians, but for the Jews. This discovery was made by Minister of Foreign Affairs Audronius Ažubalis.’

The report by respected journalist  Vytautas Bruveris describes the circumstances as follows: ‘Ažubalis initially told his fellow faction members “everyone knows” for whom the legislation was intended. Faction alderman Jurgis Razma reportedly broke the tense silence by asking Ažubalis to explain. Ažubalis then said Jews of Lithuanian origin were the strongest pushers of the bill. According to the newspaper he also hinted that property restitution was their main motive in supporting the measure.’

The context for the comment is provided: ‘During consideration of legislation providing Lithuanian citizens expanded possibilities for holding a second passport in another country, Lithuanian foreign minister Audronius Ažubalis surprised members of his own party when he suggested the new law was being pushed by Jews who seek citizenship in order to press compensation claims against the state.’

The report consolidates the Foreign Ministry’s reputation for what has been called ‘duplicity’ on Jewish issues: investing heavily in the campaign to minimize and obfuscate the Holocaust, extending to lavish state commissions and campaigns in the European parliament, while putting on expensive shows for the benefit of foreign Jewish dignitaries who are showered with honor and benefits, while maintaining a studied silence about the atmosphere of growing antisemitism toward the remnant local Jewish community. In recent years, the antisemitic mood in the country has occasionally reached a  feverish pitch.

Without combating the actual manifestations of antisemitism, and without withdrawing its own campaign to downgrade the Holocaust, the foreign ministry has invested in a ‘Fake Litvak Forum’ that would seek to improve Lithuania’s Jewish affairs image in effect by usurping the ethnonym of the annihilated Lithuanian Jewry and claiming unbounded love for Litvak culture. Stretching the credulity of many observers, the deputy foreign minister was in fact himself appointed the ‘Chief Fake Litvak’ while awards and honors continue to be showered on foreign Jewish personalities to keep them on board the project, which has drawn emotive criticism from Holocaust survivor groups.

Photo below (by Paulius Lileikis / Lietuvos rytas): Lithuania’s ‘official Jewish member of parliament’ Emanuelis Zingeris (left), now the chair of its Foreign Relations committee, conferring with Foreign Minister Ažubalis. Mr Zingeris publicly bolted from Lithuania’s Jewish community back in 1997. Over the years, he has become the ‘point man for talking to the foreign Jews’, and, in a demonstration of loyalty to ultranationalist ‘Holocaust Reduction’ politics, even signed the Prague Declaration in 2008. Last month, he announced an initiative to have 2011 proclaimed a year in memory of Holocaust victims, but the effort skidded when a week later the country’s parliament announced the same year as a commemoration for the country’s losses other than Jewish losses, with accompanying plans that would, in the opinion of western observers, honor Holocaust perpetrators and collaborators as supposed anti-Soviet patriots. In the frequently encountered spirit of double-talk, the ‘Jewish version’ was put on the parliament’s English website, and the non-Jewish version on its Lithuanian language page. 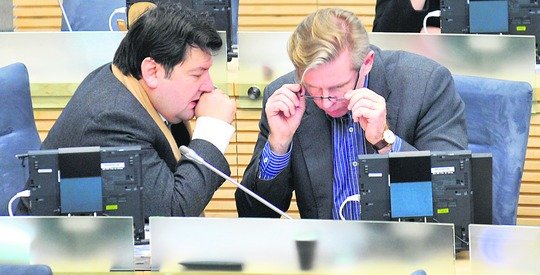