Posted on 5 October 2010 by Defending History 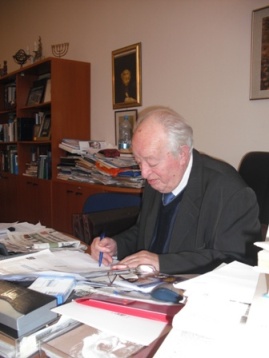 Dr Shimon Alperovich (Simonas Alperavičius), chairman of the Jewish Community of Lithuania, has written to the chairperson of the Lithuanian parliament, MP Irena Degutienė, concerning the most recent travesty of the government’s ‘Jewish merry-go-round’, as one Western ambassador put it, off the record, during yesterday’s German National day event at Vilnius’s Old Town Hall.

At the September 21st commemorative ceremony at Ponar (Paneriai), the mass murder site of 100,000 civilians  (70,000 of them Jewish), mostly at the hands of the Nazis’ fascist collaborators here, the government’s MP Emanuelis Zingeris (now head of the parliament’s Foreign Affairs Committee), boasted of a parliamentary resolution to declare 2011 the year of Holocaust Remembrance in Lithuania.

Precisely one week later, the parliament, without rescinding anything, issued a new proclamation declaring 2011 a year of remembrance for everything but the Holocaust (in fact excluding the Holocaust from the ‘Losses of 1941’). Even more painful for the country’s small but vibrant Jewish community was the undertone of glorification of the 1941 local Nazi partnering forces that unleashed the Holocaust and contributed to the country’s tragic distinction of having the highest percentage of genocide of its Jewish population in all Europe. In local  ‘code’, that association arises from the juxtaposition of ‘Defense of Freedom’ and ‘1941’ . . .

Parliament, considering that we will mark 2011 as an anniversary of events of 1941 and 1991 so extremely painful to Lithuania, underlining the loss of Lithuanian residents, understanding the special meaning of the events of those years in the course of the Lithuanian state, appreciating the support of the global society in 1991 in defending and firmly establishing Lithuania’s restored independence, resolved to name 2011 the Year for Commemorating the Defense of Freedom and Great Losses.

The accompanying press release details the ‘Losses’ referred to by the Resolution:

‘On June 13-15 1941, more than 30,000 people including many children, women and elderly persons were deported to Siberia without trial or warning. On Jan. 13 of 1991, the Soviet Union attempted to overthrow Lithuania’s legitimate administration, which had on March 11 1990 declared the country’s independence from the Soviet Union. During the attempt to take over the Television Tower and the Lithuanian Radio and Television building in Vilnius, 14 people were killed and more than 1,000 were injured.’

Dr. Alperovich’s letter, on behalf of the Jewish Community of Lithuania, was sent on October 4th, with copies to the country’s president, prime minister, foreign minister and the ambassador to Israel. Lithuanian text here. English translation here.

The Lithuanian Jewish community has expressed before its view on the events of 1941 and the Provisional Government of Lithuania as well as Double Genocide (a copy of the statement is attached). We believe that “year of commemoration of great losses” in the title is also applicable to Lithuanian Jews.

The statement referred to in the quote is the earlier protest of the Jewish Community of Lithuania at  this growing tend in high society here to glorify some of the worst Holocaust collaborators in Europe as purported anti-Soviet patriots, partisans, independence fighters, an image perpetuated in the state-funded Genocide Museum on the capital city’s main boulevard (example here).

At the same time, the government is investing considerable energy and resources in its ‘bag of Jewish tricks’, most recently the ‘Fake Litvak Forum’ that has elicited feelings of pain and revulsion in the Holocaust Survivor community internationally. In other words, the same government officials who don’t utter a word of dissent about the ongoing defamation of Holocaust Survivors are attempting to deflect attention and appropriate Litvak sentiment by proclaiming themselves Litvaks in a bizarre case of national identity theft that some experts predict will be studied for many years to come.

Rumors this week have it that the trickery included scheduling the foreign minister’s visit to YIVO (the Yivo Institute for Jewish Research, founded in Polish-era Wilno in 1925, since 1940 in New York),  after the first resolution (declaring 2011 a year of Holocaust remembrance), but before the second (the ‘real’ resolution which omits the Holocaust from the historic narrative and implicitly glorifies the Nazis’ collaborators).

It appears to some observers that the government is ipso facto enacting a regime of History Apartheid, separating out the tragedies of the ‘Lithuanian people’ from the one group of its own citizens actually annihilated in the one genocide that took place here, the Holocaust, which, critics say, is obfuscated, minimized, relativized and deflected by a seemingly infinite array of state-sponsored ruses and contortions.

Moreover, the far-right spirit of recent government policies is one of ultranationalism, that ignores the constitutional notion of Lithuanian citizenship in favor of an ethnocentric construct that conceptually and spiritually disenfranchises historic minorities who were or are not ‘pure Lithuanians’. The Tale of Two Resolutions of September 2010 is rather removed from the spirit of the European Union, and NATO.