This year’s commemoration ceremony at Ponar (Paneriai) was held today, attended  by government officials, the diplomatic corps, and a sizable crowd of mostly Jewish participants. Ponar is the mass grave site near Vilnius where 100,000 civilians ― around 70,000 of them Jews 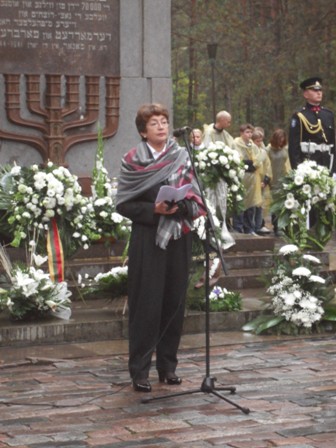 of Vilna and its environs ― were murdered by Nazi henchmen between 1941 and 1944.  In 2005, Yale University Press brought out Kazimierz Sakowicz’s eyewitness account, Ponary Diary, where it is reconfirmed that most of the killing was done by volunteer local killers.

The country’s small but vibrant Jewish community was proudly represented by Faina Kukliansky, head of the Vilnius Jewish Community and vice chairman of the Jewish Community of Lithuania. In her speech (English translation here), Kukliansky, one of the country’s foremost attorneys, did not mince words. She explained that whatever differences of opinion may exist, the community was unanimous in condemning the Double Genocide movement, as well as projects to equate Nazi and Soviet crimes whose purpose is to trivialize or mitigate the Holocaust specifically and the notion genocide more generally. Moreover, she stressed the need to expose the identities of all the local killers who carried out the genocide of Lithuanian Jewry. She also mentioned that it was only the Jewish Community of Lithuania, not the Lithuanian or Israeli government, that established a fund to help each and every Holocaust era Lithuanian rescuer live a better life to the end of his or her days.

Fania Yocheles Brantsovsky, a Vilna Ghetto survivor and hero of the anti-Nazi partisan resistance in the forests of Lithuania, delivered her own eloquent address in Yiddish, declaring that the victims would never be forgotten, neither by Jewish people nor by humankind.

A politically crafted speech was given by Emanuelis Zingeris, member of the Lithuanian parliament and its ruling right-wing faction, who is head of  its committee on foreign affairs. Though a prominent Jewish personality, he resigned from the Jewish Community of Lithuania years ago, and has become a leading figure in Baltic nationalist circles. He continued the politicians’ tradition of saying different things to different audiences. He told the assembled crowd that he did not really consider Nazi and Soviet crimes to be equal, and that  those who raised ‘suspicions’ about Ghetto escapees were making a ‘mistake’,  but made no reference to his own many on-the-record pronouncements over the years in his governmental capacity as point man and ‘court Jew’ for the ‘Double Genocide movement’.

Mr Zingeris is himself a signatory of the Prague Declaration, signed in Prague on 3 June 2008, as fate would have it the same day that the western diplomatic community gathered at the Irish ambassador’s residence in Vilnius to honor Fania Yocheles Brantsovsky (around a month after Lithuanian police came looking for her and Dr Rachel Margolis). Recently, he has tried to convince journalists that the offensive parts of the Prague Declaration had actually been amended, though its website does not indicate any alterations. Moreover, Mr Zingeris and the commission he heads have often declared in favor of  absolute Nazi-Soviet equivalence down to the smallest details (e.g. here, here & here) with the tendency of local Holocaust Studies made abundantly clear (see e.g. here).

On the subject of the accused Jewish partisans, the ‘Red-Brown Commission’ of which he is chairman, has yet to utter one word in public (or on its website) protesting prosecutors’ campaign against Holocaust survivors who resisted, one of whom, Dr. Yitzhak Arad, was himself a commission member. Sir Martin Gilbert, the eminent British historian, resigned from the commission in 2009 citing these matters.

Of the Lithuanian government officials who spoke at the event, not one mentioned the vast local collaboration and participation in the genocide that gave the country its sad distinction of having the highest percentage of its Jewish population killed in all of Europe.

A highly focused speech was delivered on behalf of the Israeli Embassy in Riga by its deputy head of mission, Liat Wexelman, who did not hesitate to mention the overwhelming role played in the genocide of Lithuanian Jews by local killers.

Members of the Jewish community interviewed after the event noted that they respect the September 23 date (marking the day of the Vilna Ghetto’s liquidation in 1943 by the German Nazi administration), though for Lithuanian Jews other days are more evocative of the specifically Lithuanian Holocaust. Among them are June 23rd, when the Lithuanian Holocaust broke out in 1941 in dozens of locations before the arrival of German forces; or October 29th, day of the ‘Great Action’ in Kaunas (Kovno) that year, when 4,273 children, 2,920 women, and 2,007 Jewish men were killed in one day, the largest single-day tally of genocide during the Holocaust in Lithuania.

In his address at Yad Vashem in Jerusalem the previous day, attorney Joseph Melamed, chairman of the Association of Lithuanian Jews in Israel stressed the political motivations inherent in the choice of September 23rd by the Lithuanian government. He discussed viable alternatives, including August 28. On that week in 1941, the centuries old Jewish civilization of  seven  towns came to an end, as virtually their entire Jewish popoulations were shot at mass graves by Lithuanian forces realizing the Nazi project in the country. The seven towns are Aniksht (Anykščiai), Keydan (Kėdainiai), Maryampol (Mariampole), Nay-Aleksander (Zarasai), Ponevezh (Panevėžys),  Raseyn (Raseiniai) and Utyan (Utena). Mr Melamed discusses other major dates of the Lithuanian Holocaust in his address. Full text here (in Hebrew).

Report of Jerusalem of Lithuania (publication of the Jewish Community of Lithuania) here.