Posted on 6 October 2010 by Defending History

YIDDISH BORAT, HAVING SAVED FREEDOM OF THE PRESS IN LITHUANIA, HEADS FOR KAZAKHSTAN TO EDUCATE THE OSCE. HE ‘CLEANSED’ HIS ‘YIDDISH INSTITUTE’ OF YIDDISH FOR 11 MONTHS OF THE YEAR. . .

Sarunas Liekis, director of the Vilnius Yiddish Institute has been appointed by Lithuania’s Ministry of Foreign Affairs to an elite team of experts who were sent to a Review Conference in Warsaw (30 Sept — 8 Oct), in preparation for a second Review Conference in Vienna (18-26 Oct), and a third in Astana, Kazakhstan (26-28 Nov). These are all in preparation for a much larger OSCE summit scheduled for Kazakhstan that will follow on 1-2 December in Astana, that nation’s capital.

A prime theme of the OSCE summit, which marks Lithuania’s accession to the  chairmanship of OSCE, is media freedom and safety of journalists.

Details were released on 5 October by the Ministry (more here), which also put on its website this photo of the team preparing for the series of foreign trips culminating in the OSCE summit. 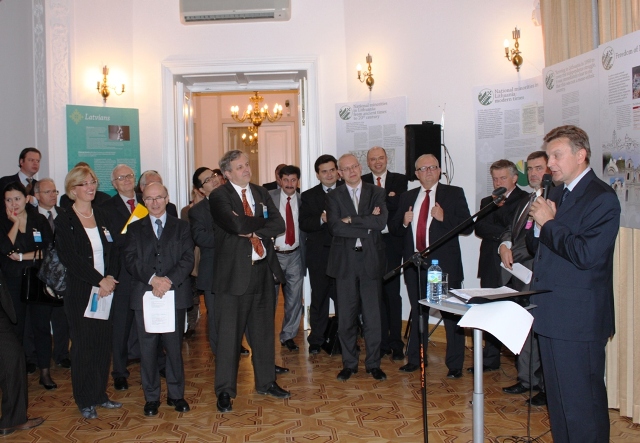 Lithuanian Ministry of Foreign Affairs:  ‘The True Taste of Yiddish Language and Literature  — and Litvak Culture’

This journal sincerely hopes the VYI’s director, Professor Sarunas Liekis, will report to the OSCE on the failure of Lithuanian prosecutors to abandon the lamentable investigation into his own institute’s librarian, 88 year old Fania Yocheles Brantsovsky, who has, along with other Holocaust Survivors, been the victim of an ultranationalist state-sponsored campaign of defamation. Details here. These are grave violations of human rights that were duly brought to the attention of the OSCE in December 2009.

The role of the press has been vital in these sad events.

Lithuania’s main news portals uncritically — and without providing opportunities for response — carried antisemitic prosecutors’ calumny, in May 2008, alleging that Brantsovsky, and Dr Rachel Margolis, could not be found and are somehow fugitves. In October 2009, when Brantsovsky won the Cross of Merit from the president of Germany, a vitriolic attack on her followed in minutes on the country’s main news portal, Delfi.lt. To this day there is no mention of her award on the VYI website’s news and events page. Observers in Lithuania note that Professor Liekis now has a splendid opportunity in Astana to highlight problems with the role of the press and journalists in his own country, especially on issues of antisemitism, Holocaust distortion and revisionism, and the collapse of academic freedom in the institute of which he is director. 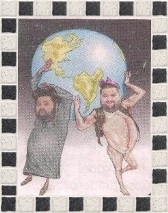 One of the best-known incidents of recent years concerns Bernardinai.lt editor Andrius Navickas. After protesting the front-page revival of The Jew and the Gay holding up the globe (i.e. controlling the world, see postscript below, at the end of this report), an antisemitic and homophobic mass circulated daily reprinted the cartoon with Navickas’s head and anatomy inserted into both, deterring other journalists from speaking up against hatred and bias. The reaction (if any) of the state and leading NGOs to the surrounding series of events, needs to be examined closely by the OSCE’s bodies concerned with protection of journalists. The remit extends beyond physical safety to the minimal professional and personal dignity requisite for continuation of meaningful work.

Indeed, it is hoped that the crack team of human rights specialists, with the director of Eastern Europe’s one Yiddish institute on board, will not fail to underline the issues that have brought so much pain to the Jewish Survivor community in Lithuania, and in which the nation’s media has been a prime facilitator: antisemitic 1930s style front page spreads about Jews, and a substantial and consistent barrage of antisemitic material that often goes unchallenged by the nation’s leaders. It would, moreover, be vital to investigate the role of a an ostensibly free press as a de facto enabler for antisemitic government policies with reference to neo-Nazi demonstrations with police protection, on occasion with permits taken out by members of parliament; continued investment in the Double Genocide model and the ‘investigations of Soviet partisans’; the legalization of swastikas;  the criminalization of cherished Western views of World War II, and the dismissal of academics who do not agree with the state’s Holocaust Obfuscation politics.

On this last point, there is a second curious interface with the professor’s own Vilnius Yiddish Institute, whose one Yiddish professor (and the only Jewish member of its academic staff), now this website’s editor, was discontinued after turning to journalism to inform the outside world about the above-cited Jewish issues. No doubt Professor Liekis will address the issue at the conference in the Kazakh capital, where Lithuania’s assumption of the OSCE’s chairmanship happily coincides with the vow to protect freedoms of the press and of speech. The VYI’s Yiddish professor had ‘sinned’ by publishing articles in publications such as the Guardian, Irish Times, Jewish Chronicle, Tablet, the Washington Jewish Week, and, in addition, —  founding  and editing DefendingHistory.com.

Yiddish Studies circles were concerned that the Yiddish specialists directing the Yiddish Institute are being spread too thin. In addition to the many Foreign Ministry assignments abroad, the director, also a professor at Vilnius’s prestigious Romeris University, has now, in addition, been named dean of the Faculty of Political Science and Diplomacy at Vytautas Magnus University in Kaunas. Perhaps students immersing themselves in the treasures of Yiddish language, literature and culture will be able to commute between these various institutions on a rotational basis with a special minibus provided by Indiana University’s Borns Jewish Studies program, which continues to prop up the Holocaust-distorting establishment in Vilnius in return for junkets and personal favors (more details here).

Finally, it is vital that the OSCE investigate the laws passed in 2010 by Lithuania (and Hungary) that would criminalize the opinion that the Holocaust was a unique genocide in the country’s history, with prison sentences up to two years in Lithuania and three  in Hungary. These laws have rapidly stifled free speech, a free press and the free work of journalists, historians and researchers, especially those with sympathy toward their country’s annihilated Jewish population. In the same framework, there is a need for the OSCE to examine the Lithuanian court’s May 2010 legalization of public swastikas, largely passed over in silence by officials, and to date, the members of the Foreign Ministry’s delegation to the OSCE summit.

Postscript: Does the Lithuanian Foreign Ministry’s delegation to the OSCE’s forum on free journalism intend to bring up their views of front page mass circulation spreads in the daily press like this one from 2009, headlined ‘Who controls the world?’ followed by a charming caricature of the Jew and the Gay holding up a globe? Have the delegation members gone on record with their views on this very locally popular brand of ‘freedom of the press’? 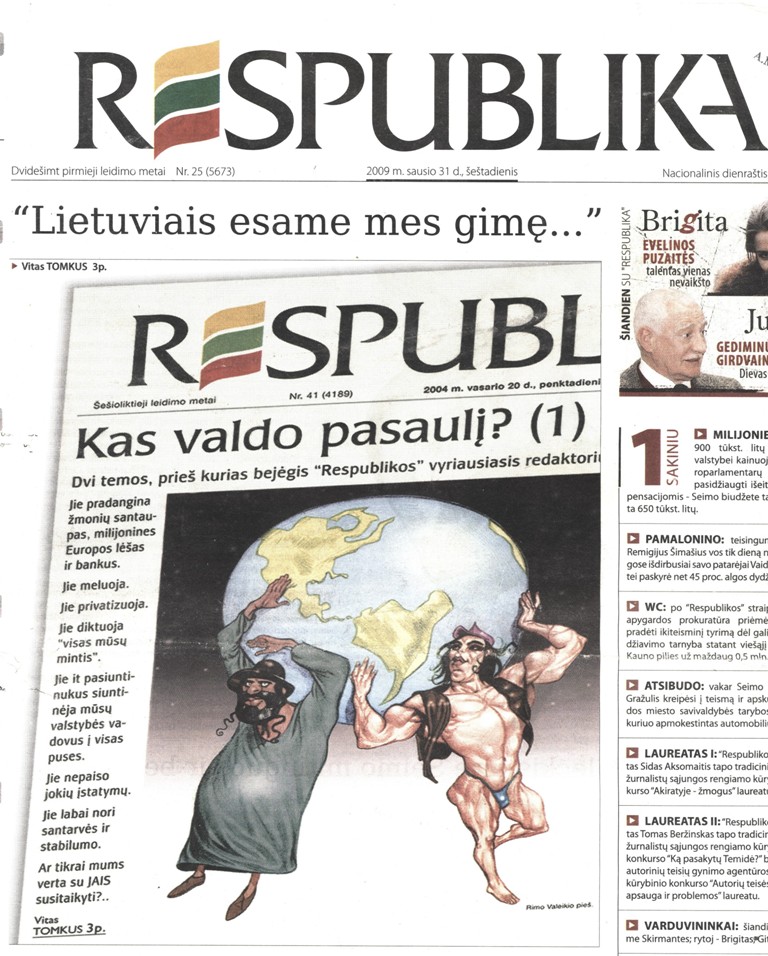