This journal reported on 6 September 2010 on an elaborate plot by the Lithuanian government’s ‘Jewish manipulation department’, as the informal grouping is known in Vilnius diplomatic circles, to usurp (some would say ‘hijack’) the ethnonym Litvak and abuse it to cover for — and facilitate — the state’s policies on Double Genocide and antisemitism with ‘Jewish’ projects.

Did any of the ‘Fake Litvaks’ actually sign the 2011 public letter protesting the capital’s neo-Nazi march?

Because of the Holocaust, which resulted in the murder of around 95% of Lithuanian Jewry, the highest percentage in Holocaust-era Europe, the present-day Litvak community is small, weak and often taken advantage of by government personnel who smell political or financial benefit from playing ‘Jewish cards’ with naive foreign visitors, many of whom are in understandable awe at visiting their ancestral home.

The high priority placed on the Fake Litvak Forum, as it became known, was indicated by its being chaired by the then deputy foreign minister of Lithuania. The day it was announced, 15 July 2010, the prime minister’s chancellor boasted of ‘rich Litvaks’ having been found to finance it. Protests followed immediately from Holocaust Survivors of the ALJ, the Simon Wiesenthal Center, the Litvak Studies Institute and this journal (see here). There is particular fear that it is to serve as cover  to deflect attention from the ongoing  antisemitic campaign in the country, including exhibits at major state-financed museums and theme parks, the 2010 legalization of public swastikas, the failure to close the widely condemned war-crimes investigations against Holocaust Survivors and to apologize to them, and the declining standards of democracy and tolerance for debate on these issues.

The 20 July 2010  memo that was leaked and published by this journal had the names of the members of the unit blacked out. A member of the Lithuanian parliament, who asked to remain anonymous, today provided the media with an unexpurgated copy of the original memo, which is now a historic document in the long and sad story of an East European government trying to acquire ownership of the remains of the heritage of a near-extinct minority, and with frequent political motives (including Holocaust Obfuscation and Double Genocide) and financial motives — plans to generate millions by what the Jewish Community calls the ‘Dead-Jew Disneyland Vilna Ghetto Theme Park’, highly offensive to survivors and their families, which visualizes reconstruction of the Great Synagogue as a huge profit mill for architects, builders, and politicians alike. 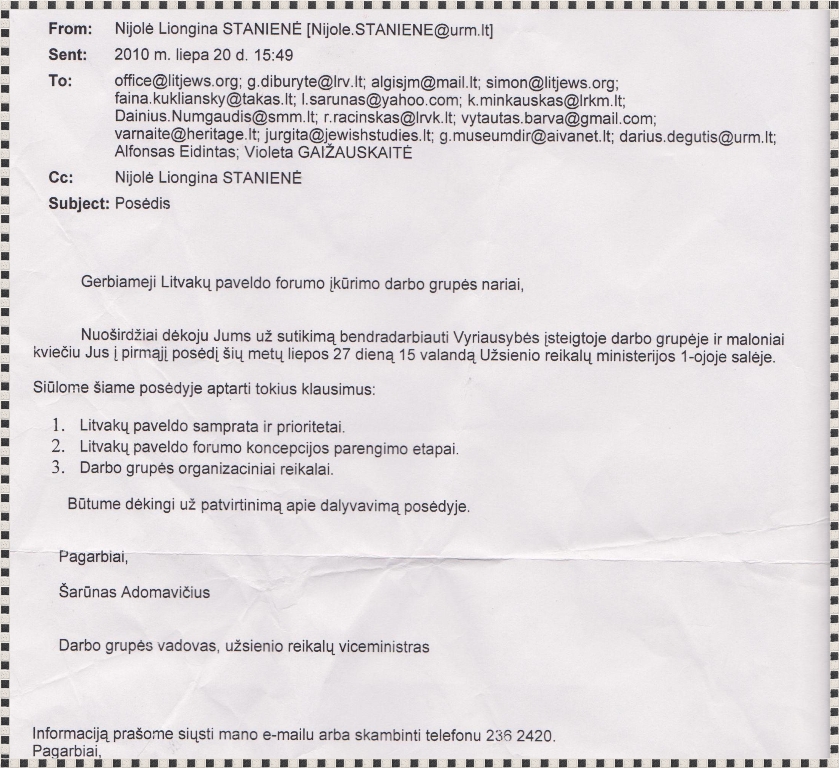 For cover, the circulated email  included the leaders of the actual Jewish community, who do everything in their power to preserve the integrity and dignity of the Litvak tradition within the difficult circumstances prevailing. The surprise is the list of Fake Litvaks: those designated by the Lithuanian government as qualified, successful manipulators of naive foreign Jews.

Some are no doubt sincere in their efforts to preserve Jewish culture, but, observers point out, they can no more become ‘Litvaks’ than white Jewish liberals could have become African Americans in the days of the Civil Rights struggle in the United States. As for sincerity, the Litvak community was heartened to see hundreds of Lithuanian citizens speak out against the 2011 Independence Day neo-Nazi march (that proceeded on the capital’s main boulevard with a city permit and the participation of a member of parliament and of the Genocide Research Center). Folks will no doubt be looking to see which, if any, of the ‘Fake Litvaks of 2010’ dared to sign the 2011 petition to which nearly six hundred of their countrymen affixed their names with pride.

Since its exposure, the ‘Fake Litvak Forum’ has been revived in the VilNews online journal, where the contributions come in part from genuine Litvaks, but from a highly manipulated and tiny circle of those known to champion government apologetics.