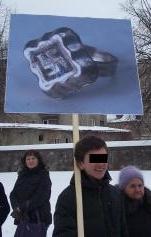 A Lithuanian court in Klaipeda approved the public display of swastikas on the grounds that they are ‘Lithuania’s historical heritage rather than symbols of Nazi Germany’. An ultranationalist ‘expert’ transported from Vilnius was easily able to persuade the court, which did not bother to ask a contrasting view of the Holocaust Survivor community, or the Jewish Community of Lithuania, in a European country with one of the highest proportions of Holocaust genocide on the continent. This sad distinction resulted from massive local participation.  Image from 16 Feb Klaipeda demonstration courtesy DMN atKaunodiena.lt.

BNS report on the court’s 19 May decision here. So much for the parliament’s 2008 ban on ‘Nazi and Soviet symbols’ which only caused pain to aged veterans of the anti-Nazi war effort, and which was ultimately part of the machinations in support of the Double Genocide movement in the European Parliament, in cooperation with the movement’s local power structures.

The United States Embassy has remained silent on the legalization of public swastikas.