Green House Reopens in Vilnius; Kostanian is the Star

Posted on 19 October 2010 by Defending History


The Green House, as the Holocaust exhibit of the Vilna Gaon Jewish State Museum of Lithuania is internationally known, was formally relaunched today in Vilnius after a closure of several months for renovations, technical upgrading of a number of exhibits and the addition of video screens and other facilities. 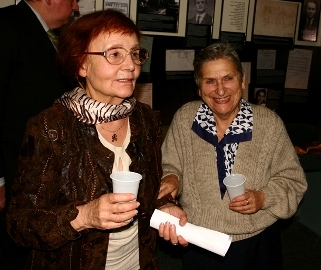 In a massive show of support for Rachel Kostanian, its beloved guardian and director since its inception over two decades ago,  the diplomatic corps came out in force, including the ambassadors of  Austria, France, Germany, Japan, Norway, UK and chargés d’affaires or consuls of Bulgaria, the Netherlands and the United States. There was a sense of relief that Ms Kostanian and her staff had succeeded to preserve not only the vast majority of images, texts and topics from the venerated old exhibit, but also its key message of straight-talking Holocaust studies that stays clear of the obfuscating discourse of ‘artificial balances, mitigations and excuses’ that runs rampant in this part of Europe. 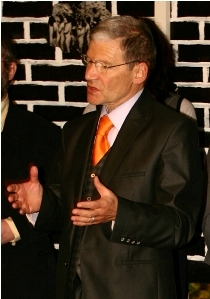 The event was ably and elegantly chaired by the museum’s director, the renowned Lithuanian author Markas Zingeris who began by saying that the event takes place not because of but in spite of the Holocaust. He also politely asked critics to remember that the Green House aims not only to provide a museum for international visitors, but first and foremost for Lithuanian citizens, and in the first instance pupils and young people.

The director introduced Rachel Kostanian to enthusiastic applause. Her remarks were followed by a brief Yiddish speech by Fania 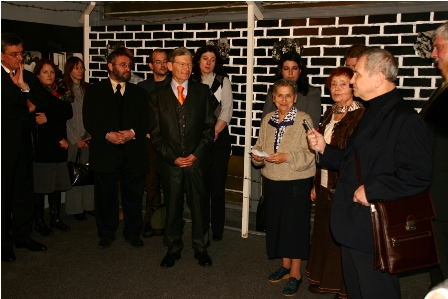 Yocheles Brantsovsky, who explained how entering the Green House brings back not only the sad memories of her Holocaust years, but also the happy memories of her prewar youth in Vilna and its intensive Yiddish cultural milieu, a reference to the exhibits dedicated to prewar Jewish Vilna.

The air was thick with unspoken high drama about whether the contentious Holocaust issues of the day here in Vilnius would be referred to even obliquely. Just before the formal portion of the event was closed, the elected chairman of the Jewish Community of Lithuania, Dr Shimon Alperovich (Simonas Alperavičius) asked to say a few words.

Dr Alperovich expressed his hope that the Lithuanian government would at long last come to terms with the Holocaust and abandon its policies of ruses and mirrors. He mentioned his recent letter to the chair of the Lithuanian parliament (the Seimas), in which he asked for clarification following the farcical series of events last month. 2011 was declared as a year of remembrance for Holocaust victims. But one week later, 2011 was declared as a year for remembrance of great losses and the struggle for freedom with no mention of the Holocaust (and with widespread fear in the Jewish community that celebrations of the ‘struggle for freedom’ might again include projects to glorify the local collaborators and murderers of 1941 who are sometimes regarded as ‘anti-Soviet heroes’).

Dr Alperovich respectfully asked that the Lithuanian government abandon its insincere and divisive Holocaust politics to enable historic reconciliation and good will to prevail.

In anticipation of the event, Rachel Kostanian was honored by a major feature article by Esther Goldberg in the Canadian Jewish News, part of a series on Jewish women of achievement throughout the ages. Ms Goldberg, of London, followed up with a second article on contemporary Holocaust issues in Lithuania, in which Kostanian’s epic battle to preserve the memory of the Holocaust in Lithuania is duly referenced. 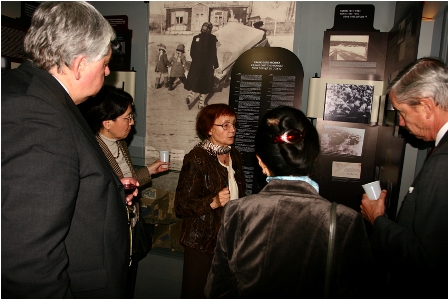 Rachel Kostanian explains an exhibit to the ambassadors of (from left) Bulgaria, Japan and France.

The assembled were particularly happy to see the enthusiastic young members of staff, including researchers Neringa Latvytė-Gustaitienė, Milda Jakulytė-Vasil, and Austrian Gedenkdiener volunteer Sebastian Pammer. Among the veterans of the Green House’s early years who were in attendance was Ilya Lempertas, who shared memories of its first years with visitors during the informal reception that followed. There was also an animated and mutually respectful discussion between this journal’s editor and Mr Zingeris, which was filmed by London film maker Kym Oeser who flew in specially for the event, as part of a documentary film directed by Danny Ben-Moshe. Litvak Studies Institute director Professor Mikhail Iossel was also in attendance.

The Green House staff and  guests alike agreed that the event was a major success for all parties concerned and augured well for the future.

There was just one note of sadness that could not be made to go away. Dr Rachel Margolis, a cofounder of the Green House who helped set up its exhibits, is unable to return to Vilnius, nine days before her 89th birthday on 28 October 2010. She is one of the Holocaust Survivors who joined the anti-Nazi resistance who has been targeted for a lamentable ‘investigation’ by Vilnius prosecutors. During a telephone conversation from her little wooden house in Rechovot, prior to the event, Dr Margolis asked that her warmest greetings be conveyed to all the assembled at the Green House in Vilnius. 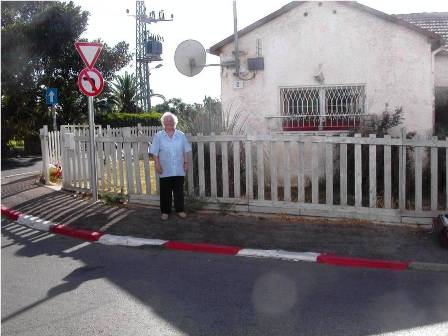 Dr Rachel Margolis near her home in Rechovot

The French ambassador, HE François Laumonier, graciously noted that he had sent off his birthday greetings to Dr Margolis, now in Rechovot, Israel. During the informal toasts, the hope was expressed that she would one day soon be able to return soon to Vilnius. And to her beloved Green House.

This entry was posted in A 21st Century Campaign Against Lithuanian Holocaust Survivors?, Events, It Pays to Defend History: Success Over the Years..., Lithuania, Museums, News & Views, Politics of Memory, Rachel Kostanian. Bookmark the permalink.
↑ Return to Top