Posted on 9 September 2021 by Defending History

VILNIUS—Two days before tomorrow’s government-sponsored international “academic” conference (on September 10) that glorifies alleged 1941 Holocaust perpetrator Juozas Lukša (without a single paper devoted to the issue of his Kaunas 1941 Holocaust participation), the foreign minister led a high-end Holocaust remembrance ceremony (yesterday, 8 Sept.) bewailing the calamity of the Holocaust and its scale in Lithuania. That ceremony dated the onset of the Lithuanian Holocaust to the first week of September, when the Nazis set up the Vilna Ghetto, and others.

As ever, curious acrobatics seen to be in play in choice of the date to deflect attention from 23 June 1941, the day the barbarity and slaughter were initiated in dozens of Lithuanian towns before arrival of the first German soldiers. June 23rd is the day the Holocaust in Lithuania started according to all Holocaust survivors interviewed over the last thirty years, and it has been particularly painful for them that Vilnius has a street called “June 23rd Street.”

Eyewitness accounts of Lukša’s Kaunas deeds were assembled by Alex Faitelson and Joseph Melamed  regarding the Lietukis Garage Massacre in that last week of June 1941. An early day 2011 motion in the British Parliament cited eyewitnesses to his alleged participation in the beheading of Rabbi Zalmen Osovsky in Kaunas, also in June 1941 (for more citations see Defending History’s initial report on the Lithuanian parliament’s decision last year to dedicate 2021 to Lukša’s memory). Last week’s Lukša events have included inauguration of a major new monument with an address by the prime minister.

Statements painfully protesting the Lithuanian parliament’s decision to name 2021 for this infamous alleged participant in the Kaunas atrocities of June 1941 have been issued by Faina Kukliansky, head of the official Jewish Community of Lithuania, jointly with Rabbi Andrew Baker, head of international affairs for the American Jewish Committee in Washington, D.C. The Jewish Community went on (very unusually) to bitterly critique the state-sponsored “Genocide Center” on the glorification of Lukša. Other voices of dismay have come from Dr. Laurence Weinbaum of the World Jewish Congress who edits its prestigious academic j0urnal Israel Journal of Foreign Affairs, and Mr. Yakov Faitelson, who recounts his late father’s being honored for telling the truth by the late Lithuanian president and statesman Algirdas Brazauskas. 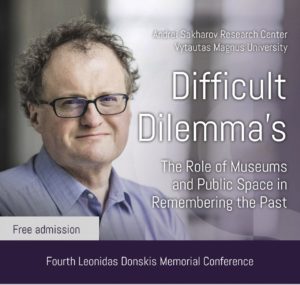