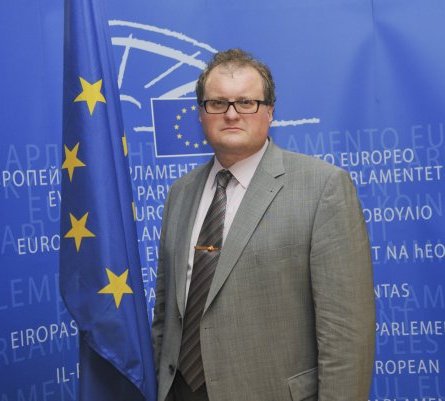 Professor Donskis has been a stalwart voice in the resistance to the inflation of the word “genocide” that lies conceptually near the heart of the far right’s red-equals-brown movement. He has been a powerful voice against Holocaust Obfuscation and a consistent campaigner against homophobic legislation.

Juozas Ambrazevičius (Brazaitis) was the 1941 Nazi puppet “prime minister” in Kaunas who signed the July 7th order confirming that all Jews of Kaunas (then numbering in the tens of thousands) must within four weeks be incarcerated in a  ghetto.

A memorial conference was announced at Vytautas Magnus University for Saturday 19 May 2012 at 11 AM, at the university’s Catholic Theology Faculty Hall at Gimnazijos Street 7 in Kaunas. Professor Donskis’s statement calls for its unequivocal cancellation, and implies that cancellation will soon be announced formally.

It is one of the events in the still-scheduled four-day series of festivities and memorials starting on Thursday 17 May with the arrival of Ambrazevičius’s remains from the United States for a ceremony at Vilnius International Airport, extending to reinterment with full honors in the altar of the Church of the Ascension of Christ in Kaunas, on Sunday, May 20th, followed by the premiere of a “documentary” film to whitewash the Nazi collaborator’s biography (video promo here). Meanwhile, a Lithuanian archbishop published an article in Bernardinai effusively praising the wartime Nazi collaborator.

“As a citizen and patriot of Lithuania, I raise my voice and take a stand against the obfuscation of the Holocaust and against what I take as a slap in the face to all Holocaust survivors. As a citizen and as a Lithuanian academic, I apologize to all Holocaust survivors for this shameful, unpardonable, and deeply insensitive move of my country and its political elite. This is a disgrace. J’accuse.”

According to a source at the Genocide Center, however, “the VMU event will proceed on Saturday as planned, whatever Donskis might think. It is not his business.” The spokeswoman refused to give her name and said a statement would be issued later today or tomorrow. At present, the official program of events including the VMU memorial conference is posted without change on the Genocide Center’s website (English here).

Meanwhile, there was growing satisfaction among friends of Lithuania internationally that Professor Donskis had powerfully clarified his position, with hope that the rector, senate and other current authorities will soon follow suit. It has not helped VMU’s standing that  its school of international affairs is now headed by the same academic who is the state-blessed director of the Vilnius Yiddish Institute, which has been purged of Jewish (and Yiddish-specialist) academic staff, and in effect misrepresents itself as a Yiddish studies institute during the academic year. Last year, the VMU-VYI director told the Economist that the views of Holocaust survivors were in effect one of two “Talibans.”

In the midst of confusion and high intrigue, it has come as a great relief to admirers of Lithuanian liberalism that Professor Donskis has now spoken out with unambiguous moral force and for the record.

Donskis’s letter came in an email to Krystyna Anna Steiger, author of the international petition against the VMU event, and it was then released by the MEP for immediate publication in DefendingHistory.com. The full text follows.

The memorial conference will NOT take place at Vytautas Magnus University, as it was canceled by Rector Prof. Zigmas Lydeka and Vice-Rector Prof. Auksė Balčytienė last night. Together with these respectable and honorable people, we did our utmost to save the honor of our university. The shadow was cast planning and organizing the event behind the scenes, without consulting the Rector’s office.

The official letter has already been sent to the Seimas (Parliament) of Lithuania clearly indicating that if the Parliament and/or the Government assumes responsibility for certain political events and non-academic commemoration ceremonies, they should be held in the Parliament or elsewhere but not at our university.

From the very beginning, I couldn’t believe that this would be possible at Vytautas Magnus University which is far and away the most liberal university in Lithuania and in the Baltic region. It took some time to figure out what kind of stratagems were pursued behind the scenes, yet the final position of the university sends a clear message: such an event would have been a disgrace, therefore, we reject any attempt to glorify individuals and groups who symbolize the suffering and the catastrophe of Lithuanian Jews.

The event has been canceled. Yesterday, I gave an interview to BNS (Baltic News Service) where I put it simple that our authorities, by trying to honor Ambrazevičius, dealt a blow and probably killed, nearly overnight, all their attempts to get things done and to improve the situation regarding historical justice and truth about the Holocaust in Lithuania, Holocaust education, our memory politics, etc. It is impossible to pursue two mutually exclusive political goals maintaining two packages which are impossible to reconcile. We cannot sympathize with both victims and perpetrators.

I am responsible for my university as well, since I served as Professor and Dean of Vytautas Magnus University Political Science and Diplomacy School prior to my election to the European Parliament.

As a citizen and patriot of Lithuania, I raise my voice and take a stand against the obfuscation of the Holocaust and against what I take as a slap in the face to all Holocaust survivors. As a citizen and as a Lithuanian academic, I apologize to all Holocaust survivors for this shameful, unpardonable, and deeply insensitive move of my country and its political elite. This is a disgrace. J’accuse.

This is the latest news. Please dissociate Vytautas Magnus University from our authorities and their overt or covert actions which are planned and which are to be held in the coming days.