On Friday 9 October 2015, the Šeduva Jewish Memorial Fund Society presented the results of their work on the project Lost Shtetl. There were, taken together, over two hundred visitors on the day. They included pupils of Vilnius’s Sholem Aleichem school and of the Šeduva high school, representatives of the Jewish community of Šiauliai (Shavl), Lithuanian Jewish Community chairperson Faina Kukliansky, the mayors of nearby towns, a deputy minister of foreign affairs, and ambassadors or embassy representatives of many countries, including the Netherlands, Japan, Poland, the Czech Republic, Croatia, Romania, and Ukraine.

KAUNAS—The Postal Service of Lithuania today launched two handsome commemorative envelopes in memory of two celebrated European consuls in Kaunas who helped thousands of Jews obtain visas that enabled them to leave Lithuania during the final year before the Nazi invasion and the Holocaust came to the country. The two, Chiune Sugihara (1900−1986) of Japan and Jan Zwartendijk (1896−1976) of the Netherlands risked their careers, and more,  to disobey instructions and the letter of the law to save those who came to them for help. These were primarily citizens of prewar Poland who found themselves in Lithuania in the summer of 1940, when the country was being absorbed into the USSR, and the consulates and embassies in Kaunas were under pressure to close down altogether.

Posted in Christian-Jewish Issues, Events, Japan, Lithuania, Litvak Affairs, News & Views, Use and Abuse of Sugihara | Comments Off on Lithuanian Post Office Honors Sugihara and Zwartendijk on 75th Anniversary of “Visas for Life”

Posted on 26 November 2009 by Defending History 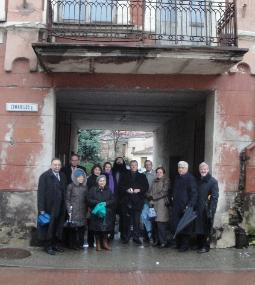 At the initiative of Norway’s ambassador to Lithuania HE Steinar Gil, a group of ambassadors and chiefs of mission defied persistent rain to go on a historical walking tour of the Vilna Ghetto, where Fania Yocheles Brantsovsky, 87, librarian of the Vilnius Yiddish Institute, recounted the history of the city’s anti-Nazi resistance. They represented the embassies of Finland, France, Germany, Ireland, Japan, Norway, Poland, Portugal and Russia. Britain, Canada and the United States had participated on a previous date.

The walk was preceded by a meeting at the Jewish Community of Lithuania addressed by Norwegian ambassador HE Steinar Gil, JCL chairman Dr Shimon Alperovich, executive director Mr Simon Gurevich, and Professor Dovid Katz of the Vilnius Yiddish Institute. The event is perceived as a meaningful response to the campaign of defamation targeting Jewish veterans of the anti-Nazi resistance (see below at 28 October 2009). Report at: Responses (→ 26 Nov 2009). 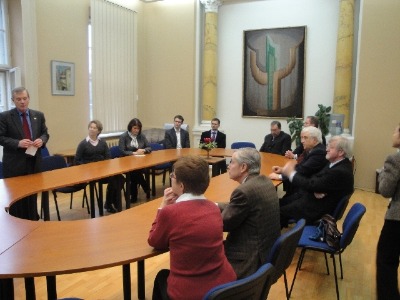 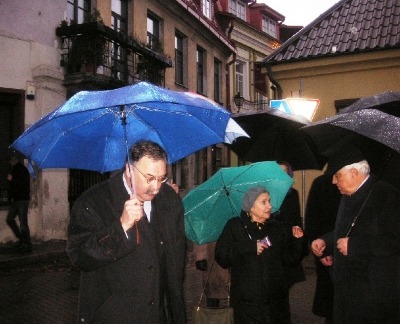