On Friday 9 October 2015, the Šeduva Jewish Memorial Fund Society presented the results of their work on the project Lost Shtetl. There were, taken together, over two hundred visitors on the day. They included pupils of Vilnius’s Sholem Aleichem school and of the Šeduva high school, representatives of the Jewish community of Šiauliai (Shavl), Lithuanian Jewish Community chairperson Faina Kukliansky, the mayors of nearby towns, a deputy minister of foreign affairs, and ambassadors or embassy representatives of many countries, including the Netherlands, Japan, Poland, the Czech Republic, Croatia, Romania, and Ukraine.

The event was slightly delayed as all awaited the delayed arrival of prime minister Algirdas Butkevičius. Instead of being a setback for the day, it ended up being a plus, as people had a chance to begin to actually talk about what the day was all about, what the Holocaust was all about, and what a prewar shtetl was all about. Not that any grand or final conclusions were reached about any of these questions, but the very fact of dialogue between the assembled on the deeper questions of the day was highly beneficial to its meaning for the people who took the time and trouble to come all the way to the depths of provincial Lithuania to this little town. 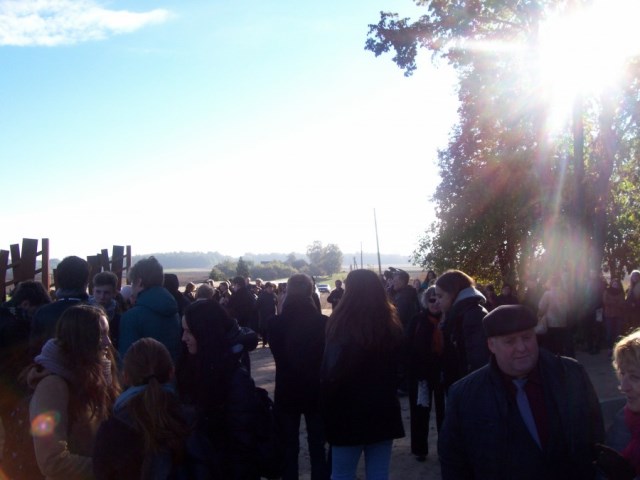 The talks were right on target in their content and structure. Sergey Kanovich (Kanovičius) provided a survey of the history of the Jewish community of the town, and of the efforts to clean up, restore and preserve its historic old Jewish cemetery.

After looking around the cemetery people gathered around the large impressive new monument: a large stone edifice with a cut out star-of-David (mogn-dóvid). The famous young Vilnius tenor Rafailis Karpis beautifully chanted the kaddish prayer for the murdered Jews of the Liaudiškių Forest where the Jews of Šeduva were murdered in 1941. The series of new monuments were created by the renowned Vilnius sculptor Romas Kvintas. 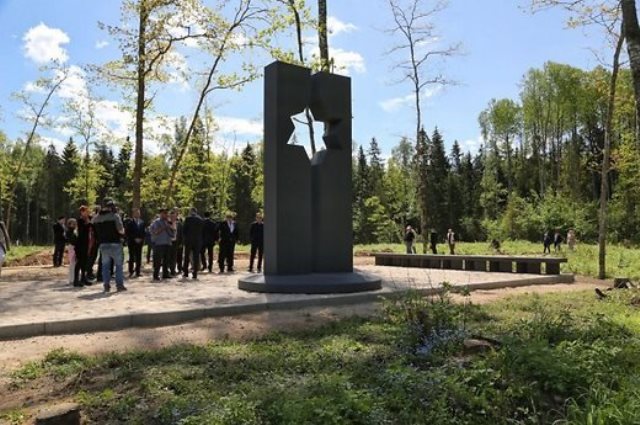 A few dozen “everyday” residents of the town were waiting patiently for the day’s events to unfold. The Foundation donated a new ambulance and there walk of the shape of museum renovation in years to come. The total investment has been three million euros which is a lot for a small town. 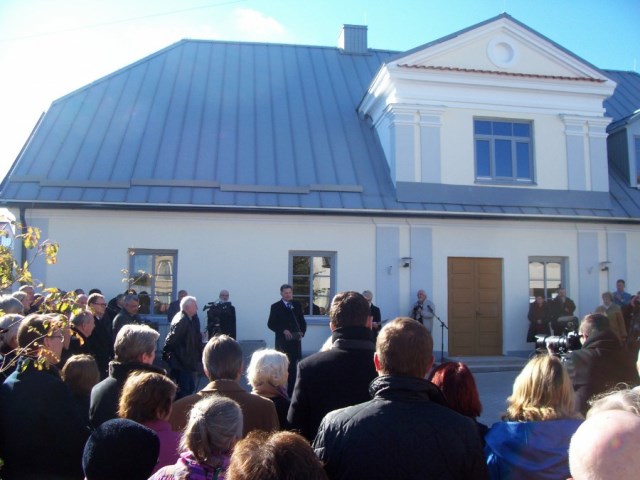 It was moving to hear the personal story of the last “born Jew of Šeduva,” Pinchos Nol, who was baptized as Petras Paluckas, whose life history is not boring. There was full translation of all into Lithuanian and English as necessary.

It was especially important that the massive monument at the cemetery was complemented by a monument in the town center inscribed in memory of all the Jews of Šeduva. The only thing that would need to be added would be a town-center plaque or board summarizing the history of both the life and the death of the town’s Jewry, with open reference to the perfidious role of the many local collaborators, a standard established several years ago by the multilingual memorial stands in Žagarė (Zháger).

But whether in Žagarė or in Šeduva, it is my very strongly held view that there needs to be a town center museum that tells the truth about the volume and contributions of the erstwhile Jewish population and equally, the truth about their annihilation. The identity and lists of full names of the victims and the perpetrators are absolutely vital to the truth.

Readers of Lithuanian can read much more about the event at:

Readers of English can access the article in the Lithuania Tribune (English Delfi.lt):

Finally, some personal impressions: Let’s start from the end: the  Šeduva monument to the Jews. Before the war, some two-thirds of the town’s population then of three thousand was Jewish.  I do not know what the sculpture calls his work specifically, referring to the monument in the town center, but to me it is — a wonderful girl. This impression was strengthened by my three-year-old daughter who I brought with me who began to hug her as if she was really alive. This innovative, unusual sculpture gave me hope that something of the shtetl’s once-upon-a-time vitality can be fathomed at least through the use of powerful symbols, with no pretense that we are getting back the actual culture, language, civilization. I hope next time there is an event, I will be able to hear Yiddish, not only English.

I liked all the speeches, but it was maybe too much for many of the high school students who were exhausted. Some would have better been lessons in a classroom or cozy chat with pupils. Perhaps sessions where pupils study old photographs with their teacher could be added.

I apologize to all those important participants I haven’t mentioned here. Perhaps the organizers could even now release a total program listing all that happened, all who worked and gave for the day and the permanent memorials, which brings me to another point.

The national and international media gave the event much less attention than it deserved.