Posted on 6 September 2022 by Defending History

Congratulations to the city of Kaunas, Lithuania, once known also as Kovno (in Yiddish forever: Kóvne) on its selection as Europe’s “Capital of European Culture” in 2022, sharing the title with Esch-sur-Alzette in Luxembourg. But as  the midpoint of the city’s co-reign rapidly approaches, it is necessary, albeit sad, to have to note that not a single public-space glorification of local Holocaust collaborators had been removed. Zero. No city on the planet has as many monuments to local partners in the genocide of that city’s Jews. The 30,000 Litvaks (Lithuanian Jews) of Kaunas were brutally murdered, and the city played the primary role in the launch of the Lithuanian genocide on 23 June 1941, before the arrival of the first German forces. Thousands were murdered before the Germans arrived and/or set up their administration.

Lithuanian government authorities have  reportedly invested large sums to lure “Useful Jewish Idiots” from the UK, US, Israel, and further afield to participate in “cultural events” intended to obfuscate and deflect from the primary issue: Why are the enablers of the slaughter of Kovno Jewry still honored by street names, plaques and university lecture halls and statues in the city? Local Jewish leaders who have dared to speak up have rapidly been smeared as “Putinists” for daring to criticize the far right’s hold over national history policy (and indeed, the need for such a policy to start with).

But in the waning days of 2021, a “waterfall of truth” began to cascade from an unanticipated quarter. Michael Levinas, son of the celebrated Lithuanian-Jewish born French philosopher Emanuel Levinas, forbade authorities to name a fancy new institute after his father. This was kept under wraps until his 21 Dec.  Le Figaro opinion piece broke the story, and it was duly reported in Lithuania by LRT.lt. See Defending History’s media tracker page for background and updates.

Moreover, it is not as if these street names, plaques and bust placed by the government in the public space were of some obscure minor figures. This year has seen the publication in the United States of Silvia Foti’s book on J. Noreika’s Holocaust participation (and her related op-eds in the New York Times and Wall Street Journal).

The Holocaust legacy of Adolfas Ramanauskas Vanagas formed the subject of a hard fought (and successful) effort to scuttle plans for a public space monument for him in New Britain, Connecticut just several years ago.

A street in the capital, Vilnius, for 1941 Berlin-based ethnic-cleansing advocate K. Škirpa was finally renamed by that city’s leaders, though two major Noreika monuments mar the nation’s beautiful capital city. And on and on. Kaunas’s leaders and natinal politicians have badly let down today’s fine Kaunaseans, and done nothing to acknowledge, let alone remove, these carbuncles on the face of the European Union and NATO allies. Nor has there been a response to date from the PR folks running the “Capital of European Culture” program on behalf of the people of Europe.

And, on May 18th 2022, Defending History’s Evaldas Balciunas published a new review of the three distinct periods of Holocaust activity by Antanas Baltūsis-Žvejas, for whom a Kaunas street continues to be named.

A partial interactive map on monuments currently glorifying Holocaust perpetrators in Kaunas (Kovno), where the Lithuanian Holocaust was initiated on 23 June 1941. See now Lev Golinkin’s inventory, published in 2021 in the Forward, of these and other  shrines to collaborators around the world. His interactive map (scroll down alphabetically > Baltics > Kaunas) identifies these shrines to Holocaust collaborators in today’s Kaunas (counting street names once, rather than each public-space occurrence of the Holocaust perpetrator’s place-of-honor name):

The city’s leaders now have a splendid opportunity to take the moral high road in dealing with a number of ghosts from the present and the past. To start with the present, will the city’s officials now act rapidly to avoid a public perception disaster by moving this year’s neo-Nazi parade away from the city center during the February 16th Independence Day celebrations? Previous years’ marches have on occasion glorified actual Kaunas Holocaust collaborators, causing deep pain to Survivors and their families, as well to so many of the city’s people.

and personal comments by

For history, there is now a genuine opportunity for the city to come to terms with its historic status as Birthplace of the Lithuanian Holocaust, where thousands of Jewish citizens were murdered in the week of 22 June 1941 by “nationalist heroes” and various pro-Nazi militias before the Germans arrived or before they took control. From the severed head of Rabbi Zalmen Osovsky, his torso left bent over the tome of Talmud he was studying, to the Lietukis Garage massacre, to the early barbaric slaughters at the Seventh Fort, the blood-soaked image of Kaunas is embedded deep in modern European history. Around 96% of Lithuania’s Jews were killed in the Holocaust, a proportion not unrelated to the gusto for activist participation as well as mere collaboration that was cemented in Kaunas and its region in the early days, when white-armbanded LAF (Lithuanian Activist Front) militia members blocked all roads from the city, and many other towns, to prevent Jewish neighbors from escaping the impending Nazi chokehold. That various of the perpetrators continue to be honored in Kaunas is unacceptable in the New Europe. Kaunas had its proud share of Lithuanian rescuers who went against Nazis and their own nationalist leaders’ orders to just do the right thing and save a neighbor. They are the ones who should be honored.

Moreover, Kaunas’s city center and old town are annually home to a march glorifying Holocaust collaborators on the nation’s  Feb. 16th independence day, a day equally cherished by the city’s Jewish citizens before their annihilation. Will Feb. 16th 2022 be different?

“Kaunas 2022” is sure to become the focus of international efforts to combat Holocaust obfuscation and racist distortions of prewar cities in the region. One good place to start is rapid removal of street names and plaques that honor 1941 Holocaust collaborators and enablers. Another is to rapidly release Alicija Žukauskaitė’s “still suppressed” documentary film that starts with a reporter asking residents of Škirpa Street for whom their street is named (see Dr. Andrius Kulikauskas on Škirpa’s ideas on ethnic cleansing of the country’s Jewish population; also Milan Chersonski in the Lithuanian Jewish community’s longtime newspaper).

Then there is the 2012 fiasco of reburying with full honors the Nazi puppet prime minister who oversaw the Holocaust’s launch. The city’s famous university continues to glorify the man today with a bas-relief and lecture hall name. Many people from far and wide will refuse to set foot in this university until rectification.

No doubt rectification must come well before 2022 if the year is not to turn into an international “dark tourism” hot spot for seekers of the macabre. That rectification can only come from the heart, from the city’s and the university’s own core, not as some kind of “fear of the Jews coming to clobber you over the head” that was, alas, part of the spirit during the 2012 reburial scandal. It must clearly be in the forefront for those planning for the 2022 events. 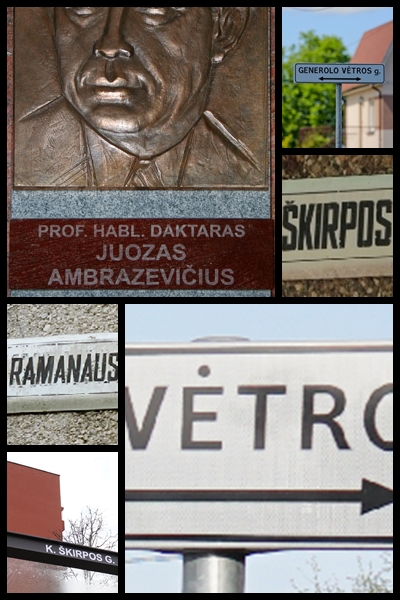 Kaunas has a grand opportunity now to become a beacon of humanistic integrity by confronting its past with honesty, integrity and respect for the city’s rich multicultural history. In can yet unleash its vast potential to become one of Europe’s great cities.

A very modest illustrative selection of  images from today’s Kaunas follow, organized by the name of the Nazi collaborator glorified in public space at the expense of the state. On the eve of the city becoming a capital of European culture.

Lecture Hall at Vytautas Magnus University in Kaunas (in the spirit of a “Marshal Pétain Auditorium” at Vichy, Bordeaux or Paris):