Posted on 18 January 2023 by Defending History

Silvia Foti: The Nazi’s Granddaughter: How I Discovered My Grandfather was a War Criminal 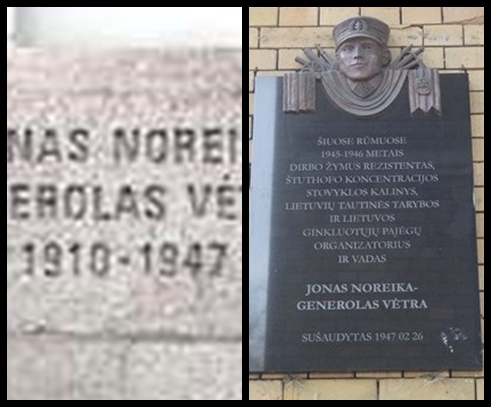 Sylvia Foti’s major new book is widely available in English and Lithuanian, among other languages. QUESTION: Why is the center of Vilnius still blighted by an upgraded plaque & bas-relief  (right) and a central boulevard marble slab glorifying Hitler collaborator Jonas Noreika, who masterminded the death of thousands of Jews, and touted his unadulterated hate for Jewish fellow citizens in a prewar book? Why do  Western diplomats, and most visiting American, British and Israeli Jewish dignitaries feel obliged to avoid even the most polite critique of these prominent carbuncles on the face of the European Union? Surely, a true friend of Lithuania would want the best for Lithuania and its international stature, even if a small far-right “history rewriting elite” might feel offended.

Kitos Knygos Books published Lithuanian edition of Silvia Foti’s book; she appeared in Vilnius to launch it at the Feb. 2022 Vilnius Book Fair

Reviews of Foti’s The Nazi’s Granddaughter: Bettina Berch in Jewish Book Council; Liz Mineo in the Harvard Gazette; in the National Book Review.

When you visit Vilnius, Kaunas and other Lithuanian citizens, be sure to ask the powers that be to remove city-center shrines to brutal Holocaust collaborators that mar this beautiful European country.

NOTE: The Defending History community expresses its gratitude to the author for duly crediting Evaldas Balčiūnas [bal-TSHOO-nas] of Šiauliai (northwestern Lithuania), who embarked in 2011 on publishing a series of essays in English in Defending History (with his careful review of each DH commissioned translation; he was mostly publishing also the Lithuanian originals on liberal blogs and websites. The first in the series was “Why  does the State Commemorate Murderers?” and the third, in 2012, was “The Posthumous Remaking of a Holocaust Perpetrator in Lithuania: Why is Jonas Noreika a National Hero?” (original Lithuanian publication). As he was following up with articles on other “national heroes” (see his DH section), Mr. Balčiūnas was fired from his job, humiliated by aggressive police visits, and from 2014 onward, subject to a series of (what the DH community regards as) kangaroo prosecutions that kept him tied up for several years with a prosecution over nothing hundreds of miles away, in the capital Vilnius (follow the saga here). The Defending History team is proud to have mounted a presence, to provide moral support, at each of these hearings in Vilnius, and to have kept Western media informed. He was found Not Guilty in 2016. See his memoir “My Seven Long Years with Jonas Noreika.”

Christoph Dieckmann & Ruta Vanagaite: How Did It Happen? (Our People. Part II. Understanding the Holocaust in Lithuania).  Available for online order.

Dovid Katz’s paper in the volume (on Baltic issues).