This journal holds leading historian Professor Timothy Snyder (Yale University) in the highest esteem, and trusts that this select list of reviews taking issue with aspects of Bloodlands of direct concern to DefendingHistory.com will not be taken amiss. It does not include reviews which have engaged in personal attack or pursued grudges, or which focus on other issues.

PREPUBLICATION DISCUSSION  IN THE GUARDIAN (SEPT-OCT 2010):  Timothy Snyder replied to Efraim Zuroff and Dovid Katz replying to him

JULY 2011: AFTER THE PRE- AND POST- PUBLICATION DEBATES ON HIS BOOK, PROFESSOR SNYDER CONTRIBUTES A FORCEFUL REACTION TO LITHUANIAN GOVERNMENT SILENCE ON THE DEFACING OF THE PONAR MEMORIAL SITE NEAR VILNIUS IN A WIDELY PRAISED NEW YORK REVIEW OF BOOKS PIECE

AN OPEN LETTER TO PROFESSOR TIMOTHY SNYDER FOLLOWING HIS PARTICIPATION IN A HOLOCAUST SYMPOSIUM IN VILNIUS (MAY 2012) IN THE WEEK WHEN THE 1941 NAZI PUPPET PM WAS REBURIED WITH FULL HONORS AND GLORIFIED.

May 2012: Honors from the Lithuanian Foreign Minister during the week the Lithuanian government reburied the glorified the 1941 Nazi puppet prime minister who personally signed papers condemning the Jews of his city (Kaunas) to torture, ghettoization and death 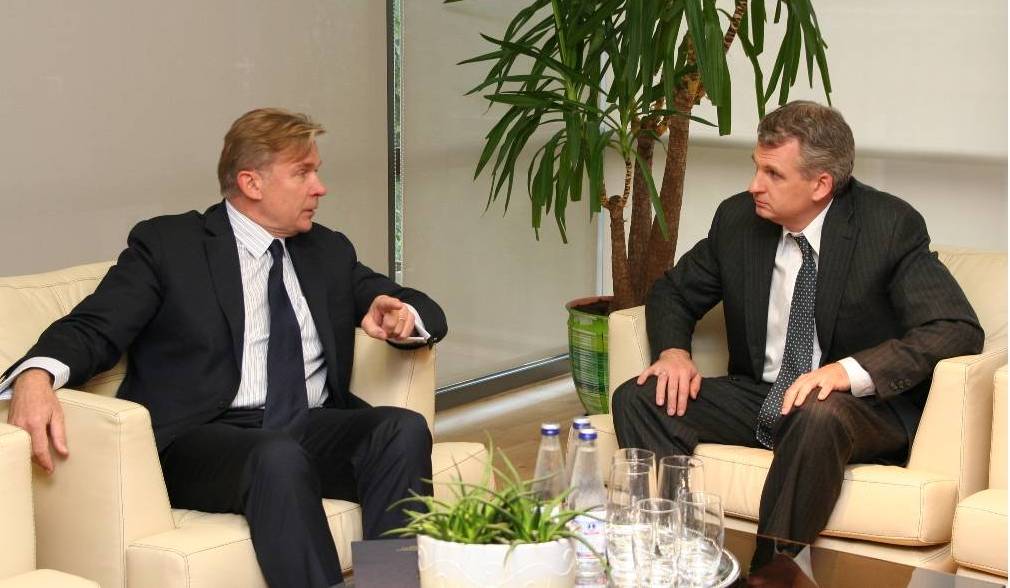 In May 2012, the foreign minister of Lithuania (left) honored Prof. Snyder in the week during which his government was reburying with full honors the 1941 Nazi puppet prime minister.  The foreign minister is known for his antisemitic outbursts, his Hitler-Stalin “moustache comparison” and his defense of the Nazi’s reburial on the floor the nation’s parliament. The event has been seen as part of a wider pattern of high officials honoring western dignitaries who seem to be supporting — or can be presented as favoring — one or more components of Baltic revisionist history.

In  July 2012, the Lithuanian foreign minister explained how Professor Snyder’s Bloodlands will be utilized during Lithuania’s (rotating) EU presidency in 2013, as part of a wider “Double Genocide offensive” in the EU. The use of Bloodlands for the nationalist narrative had earlier been proposed or explained by professors Saulius Sužiedėlis and Egidijus Aleksandravičius.  Earlier (ab)use of ‘Bloodlands’ included a September 2011 book event held at the Lithuanian Foreign Ministry where passages were misquoted to defame Jewish partisan veterans.

On 29 August 2012, BNS (Baltic News Service) reported that Professor Snyder was one of the new recruits for the International Commission for the Evaluation of the Crimes of the Nazi and Soviet Occupation Regimes in Lithuania, known for short as the “Red-Brown Commission.” The prestigious appointment was heralded a day earlier by a statement mentioning only the Yale affiliation. Report on the commission’s renewal. Background on the commission, and on the history of opposition. Scholars who have resigned on principle from the commission and associated panel of experts include Dr. Yitzhak Arad (Tel Aviv), Sir Martin Gilbert (London), Prof. Gershon Greenberg (Washington, DC), Prof. Konrad Kwiet (Sydney) and Prof. Dov Levin (Jerusalem). In September 2012, the last active association of Holocaust survivors from Lithuania protested the commission’s renewal. Updates on the commission’s renewal. Clemens Heni’s essay on the 2013 awarding of the Hannah Arendt prize.

October 2013: Professor Snyder one of the minority of members of the state Commission who would not sign the letter of regret sent to Dr. Yitzhak Arad

In October 2013, Professor Snyder was the foreign star at the relaunch of the “Red-Brown Commission” in Vilnius, but he did not issue any public comment on the outstanding Commission policies that cause Holocaust survivors and their families pain. The disappointment only grew when it emerged that he was one of a minority of members who would not even sign the rather limited attempt at reconciliation with Dr. Yitzhak Arad, nor issue any statement on where he himself stands on the attempted criminalization of survivors who joined the anti-Nazi resistance and are heroes of the free world. This could be remedied by an adequate statement by himself on his Commission’s failure to address the criminalization of Holocaust survivors including one of the Commission’s own founding members.

Oct. 2014: the Gold Star from the Lithuanian Embassy in Washington DC:

May 2015:  Order of the Cross of Terra Mariana. from the President of Estonia in Tallinn: 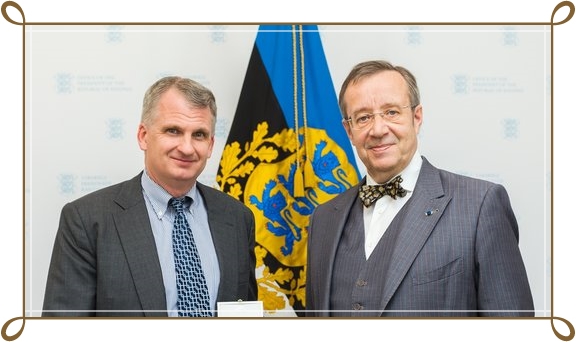 October 2015: Tina Jennings in New ColdWar.org on whether the top historian had morphed into a political Cold Warrior in a narrower political sense.

20 August 2016: Dr. Clemens Heni, director of the Berlin International Center for the Study of Antisemitism (BICSA). publishes an article in The Times of Israel on the death of German revisionist historian Ernst Nolte, noting the impact of his work on Prof. Snyder’s treatment of the Holocaust. The postulated history of ideas is developed at length in Dr. Heni’s book, Antisemitism: A Specific Phenomenon (Edition Critic: Berlin  2013).

July-November 2016:  An international furore breaks out over Vilnius City Council’s decision to defer discussions about changing the central Vilnius street name currently honoring Hitler collaborator Kazys Škirpa (see e.g. 124). Professor Snyder had in his Bloodlands (2010)  boldly and accurately reported that “The Lithuanian diplomat Kazys Škirpa used this suffering [Soviet deportations] to spur mobs to murder” (p. 192). Observers are hopeful he will use his unique status as hero of Baltic governments to publicly ask that the street name for the “diplomat” who used radio addresses to spur crowds to murder their fellow citizens of a certain ethnicity be removed. See reports of 25 July 2016 and of 19 September 2016.

A City Hall sponsored public debate on the street name was scheduled for 29 November 2016. In other words, an East European government that has awarded Prof. Snyder a medal is now sponsoring a public debate on whether to rename a street long named for a Nazi collaborator singled out in Prof. Snyder’s own book Bloodlands as having “spurred mobs to murder” (p. 192). Will Professor Snyder now speak out on the moral propriety of such a public debate which presupposes two valid sides, or simply ask that the name be changed so as not to honor a Nazi collaborator in an EU/NATO capital city? Will he publicly offer his views on this occasion?

Select reviews of Bloodlands, and related articles, focusing on issues central to DefendingHistory.com

NOTE: This is not an exhaustive list. For general purpose reviews and information on book awards, readers are referred to the book’s website: www.bloodlandsbook.com.

Gal Beckerman, ‘Exploring the “Bloodlands”. A Controversial New History Traces the Rise of a Horrible Idea: The Mass Killing of Civilians’ in the Boston Globe.

Rachel Croucher, ‘On Snyder’s Conceptualization of the Final Solution “in the Bloodlands”’  in DefendingHistory.com.

Richard J. Evans, ‘Who remembers the Poles?’ in the London Review of Books.

Dovid Katz, ‘Detonation of the Holocaust in 1941: A Tale of Two Books’ in East European Jewish Affairs.

Dan Michman, ‘Bloodlands and the Holocaust: Some Reflections on Terminology, Conceptualization and their Consequences’ in Journal of Modern European History.

Grzegorz Rossoliński-Liebe, ‘Debating, obfuscating and disciplining the Holocaust: post-Soviet historical discourses on the OUN-UPA and other nationalist movements’ in East European Jewish Affairs.

Robert Rozett, ‘Diminishing the Holocaust: Scholarly Fodder for a Discourse of Distortion’ in Israel Journal of Foreign Affairs.

Per Rudling, ‘Can Timothy Snyder’s Bloodlands be Appropriated by East European Nationalists?’ in DefendingHistory.com.

Kenneth Waltzer, review of Bloodlands in Holocaust Studies: A Journal of Culture and History.

Michael Wildt, review of Bloodlands in Kritika: Explorations in Russian and Eurasian History.

Omer Bartov, ‘How Not to Write a History of the Holocaust’ in The Chronicle of Higher Education.

David A. Bell, ‘History’s Black Hole: The Holocaust in Eastern Europe’ in The National Interest.

Richard Evans, ‘A New Lesson to be Learned from the Holocaust’ in The Guardian.

Walter Laqueur, ‘Timothy Snyder: The Newton of the Holocaust?’ in Mosaic.

Richard Steigmann-Gall, ‘The Holocaust Between Scholar and Public Intellectual’ in Humanity.