Posted on 8 January 2023 by Defending History

At the supermarket door here in Vilnius, I met Olga, a Roma woman. I was surprised that security had not chased her away, since she was begging. Even more, they brought her a chair to sit on, since Olga was pregnant. I thought to myself: “What unseen humanity of the security guards!” I have seen more than once how the begging poor were chased away even from outdoor supermarket surroundings. As I started talking to Olga, we were approached by a nice, well-to-do woman, who donated to Olga a lot of food: sausages, sweet curd snacks for children, pasta, and oil. I was again pleasantly surprised.

However, talking to Olga quickly disabused me of my illusions that perhaps there is now more good will towards the Roma. She told me about the new hardships in these years of crises, as well as about how hard it is for vulnerable people to make ends meet these days.

“Do you think I’m not ashamed to stand here with my hand stretched out?”, asked Olga in tears and added: “I have five children. What else can I do?”

It has been a long time since I asked Roma about work, especially mothers of many, because I know very well how their lives so often progress, traditionally married off in chosen matches while in their early teens and, at only say twenty years of age, a woman can be the mother of multiple children.

Soon, our conversation is interrupted by her two children, who appear seemingly out of nowhere. The children are happy and well dressed. It would be hard to distinguish them from other young citizens of the Republic of Lithuania (by the way, people in Lithuania still imagine that all Roma have brown eyes and black hair, and many would be very surprised if you told them that Roma community has many blue-eyed blonde-haired or green-eyed ginger-haired members too). But their fates will be decided not only by traditions of old, but also by integration programs, legal machinations by powers that be, and social policies.

Roma war refugees from Ukraine also face very negative attitudes. Olga confirmed that the refugees have a very hard time finding housing and work here. She mentions that Lithuanian Roma are trying to help them. “We help them with what we can, but we have nothing ourselves,” sighed a begging Roma woman and added that Ukrainian Roma are very patriotic and worry a lot about their friends and relatives in Ukraine, as well as about those who fight for Ukrainian freedom against Putin’s barbaric invasion.

Ukrainian Roma, despite their pacifist tradition, have taken up guns to defend their land. They formed their own battalions of territorial defense and join the armed forces, which include the pride of the Roma community in Ukraine, tank driver Viktor Ilchyak. 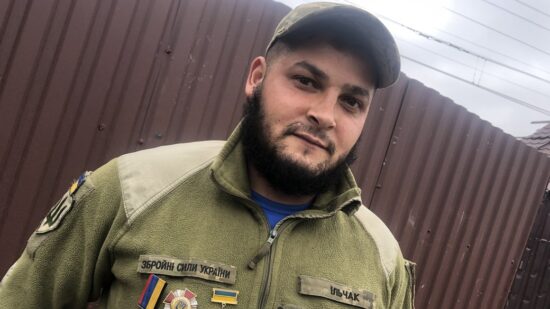 Viktor Ilchyak: Proud to be Roma, proud to fight for Ukraine’s freedom

Viktor was distinguished among his comrades for his bravery. In an interview, he stated: “If I live in Ukraine, I must defend my land.” The Roma of the 128th Zakarpattia Brigade, have fighting in the primary conflict zone from the very first days of the Russian invasion.

Besides their ethnicity, these fighters are also similar in that they are all fathers of large families. Therefore they were not obligatory conscripted and voluntarily chose to join the armed forces. 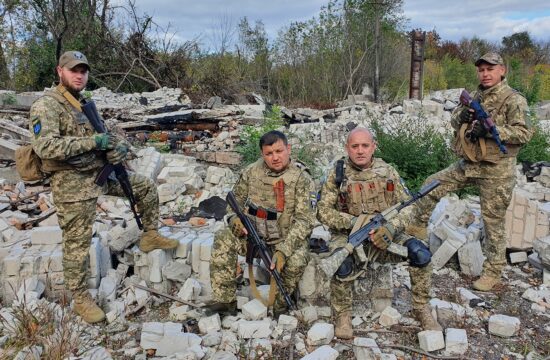 Of the four Roma, only Mykhailo (third from the left) was serving a military service. Photo: Yaroslav Halas

Here we must once again note that the Roma tradition forbids one from joining the armed forces. These bravo Roma are thereby daring to change, in the face of grave national crisis, the ways of their isolated community and have earned respect among their own and other Ukrainians. Sometimes for the very first time.

Hundreds of Roma volunteers collect money for military equipment, supply soldiers with necessities, and support their compatriots during these hard times in a wide variety of little-reported ways.

During the war, many Ukrainians changed their attitude to Roma after witnessing how much their community loves Ukraine, seeing the remarkable solidarity and patriotism they demonstrate.

Roma activist Miroslav Gorvat puts it this way: “The war mostly eradicated prejudices and discrimination against people of Roma ethnicity. Now, when our soldiers are coming back home for a while, they are met as heroes of Ukraine. This brings much joy to our community.”

News about the Roma fighting in Ukraine has now reached here, to the Lithuanian Roma community. I have no doubts that, if Lithuania were in such danger, many Lithuanian Roma would also take up arms and defend their land, and we would have many such stories, as we hear now in Ukraine.

But how sad and what shame, that we need such horrible circumstances to make our societies realize that we are one big family of compatriots who all love our land, freedom, and democracy.