Posted on 28 August 2010 by Defending History

Discontinuation of the contract of Lithuania’s last Jewish professor  — Dovid Katz, founding Yiddish professor at the Vilnius Yiddish Institute and editor of this website — for having mounted a defense of the defamed Holocaust Survivors, and building (via the Vilnius diplomatic community, op-eds in mainstream publications, and this site) international opposition to the ‘Double Genocide’ movement in Europe, and in Lithuania.

After authoring the book on Litvak culture for the Lithuanian section at the February 2009 Jerusalem Book Fair, the editor of this website who is the founding professor of Yiddish at the Vilnius Yiddish Institute, declined to attend to chair the Yiddish culture session, when he was told not to bring to the fair Dr. Rachel Margolis, resident in Rechovot. Dr. Margolis is one of the heroic Jewish partisans defamed by the Double Genocide industry. 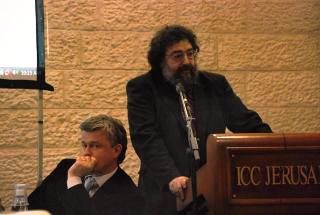 Posted on 13 September 2011 by Defending History

Following up on his 9 September 2011 circular to the staff of the Yivo Institute for Jewish Research in New York, the executive director today circulated a new missive, likewise sent to all members of staff, and claiming the support of two eminent professors, Steven J. Zipperstein and Jeffrey Veidlinger. [Full disclosure: Veidlinger was one of Bloomington’s Borns Jewish Studies program staff involved in secret 2009  negotiations with the by-then government-manipulated Vilnius Yiddish Institute, a factor in the disemployment of this journal’s editor as professor of Yiddish, language and literature, the post he held from 1999 to 2010.]

This statement follows the publication of concerns of members of the British parliament (on its website), the open letter of Milan Chersonski, longtime editor of the newspaper of the Jewish Community of Lithuania, and coverage in English, French, German and Hebrew publications, in addition to the earlier coverage in the Forward, Haaretz and DefendingHistory.com (which first interviewed Joseph Melamed at length on 30 August).

Yivo Director’s Statements on Legal Swastikas in Lithuania, Plus Some Facts

Posted on 16 November 2011 by Defending History

“One of the most important statements in the article is that the swastika is banned by Lithuanian law, something that Katz and others have refused to acknowledge.”

— Jonathan Brent, Executive Director of the Yivo Institute for Jewish Research, in a 9 September 2o11 memo sent to members of his staff

“Fact: It is illegal to display the swastika in Lithuania today.”

— Jonathan Brent, Executive Director of the Yivo Institute for Jewish Research, in a 13 September 2o11 memo comprising the text of his proposed Public Yivo Statement, for which the support of Prof. Jeffrey Veidlinger (Bloomington) is claimed.

Chronology of events, including the United Nations Human Rights Committee statement of 2012, provided below…

According to Vilnius University’s website, a ceremony to open an exhibition of “envelope art” by Antanas Šakalys will be held in the White Hall of the university’s main library on 27 September at 2 PM. Mr. Šakalys’s antisemitic postcards were on sale for many years at the capital’s main Post Office, and were exposed in 2008 by the Jewish community’s newspaper, Jerusalem of Lithuania.

Posted on 5 October 2012 by Defending History

As of today, both Vilnius University and the Central Post Office are still featuring the “historic envelope art” of designer Antanas Šakalys, though neither of the prestigious venues publicly includes any samples of his antisemitic, Holocaust-distorting and homophobic output.

The following are among the envelopes designed by Antanas Šakalys who continues to be honored by his (other) works being exhibited at both Vilnius University and the Central Post Office in the Lithuanian capital. Details and further links.

Through the good offices of the Borns Jewish Studies program at Indiana University (Bloomington), and its Dr. Alice Field Cohn Chair Yiddish studies professor, D.B. Kerler (“Boris Karloff”), who allegedly knifed his own doctoral supervisor in pursuit of a summer position in Vilnius (despite having a tenured position in the US), a comrade Soviet-Israeli self-publishing Yiddish poet has been announced as visiting professor of Yiddish on the home page of the Vilnius Yiddish Institute. Both have in some views allowed themselves to be instrumentalized by the right-wing Holocaust-revisionist establishment that seeks to cover for state policies including rampant antisemitism and the “Double Genocide” campaign via events and stunts in the field of Yiddish and Jewish studies.

According to the announcement, Dr. Velvl Chernin is now the “visiting professor” of Yiddish at the Vilnius Yiddish Institute, which was purged of full-time Jewish staff in 2010 and has been criticized for being Yiddish-free for eleven months of the year.

That situation has apparently now been remedied by the appointment of Dr. Chernin, who, it is announced,

Since 2010, when a Lithuanian court proclaimed public swastikas legal and included in its ruling the “historical wisdom” that it only a harmless ancient Baltic symbol, swastikas have proliferated at public events sponsored by the far right, with police looking on listlessly. Most painfully for the dwindling numbers of Holocaust survivors here and abroad, swastikas and other fascist symbols, along with glorification of local Holocaust collaborators, have figured in sanctioned independence day marches in Kaunas on February 16th each year, and in the capital city Vilnius, each March 11th.

Sources in Bloomington, Indiana and Vilnius, Lithuania, confirmed this week that Dr. Daniel R. Berg, an eminent physician in the greater Bloomington area, has resigned from the rump “Board of Friends” of Sarunas Liekis’s “Vilnius Yiddish Institute” (VYI). The institute’s website abruptly removed Dr. Berg’s name and photograph from the board. No letter of resignation was released to the media, but a source close to the doctor said he was dismayed to see the institute’s resources being dedicated to a campaign of defamation against its own former Yiddish professor and founder, whose name and contributions have been deleted from the historic faculty page, in the classic Soviet style of revising history.

When Yiddish is a Prop for Holocaust Revisionism

Yiddish summer course again features American author Ellen Cassedy as lecturer on Holocaust topics; her 2012 book, part-funded by the Tides Foundation (a Soros beneficiary), was launched by the Lithuanian Embassy in Washington DC.

But will students be informed of critical reviews of the book (e.g. by Allan Nadler, Olga Zabludoff, Efraim Zuroff, Dovid Katz) or about the peaceful protest that awaited her at London University?

Will organizers invite, for balance, Ruta Vanagaite and Efraim Zuroff to discuss their 2016 book (recently featured in Newsweek)?

In Reply to Summertime Yiddishists in Vilnius

VILNIUS—The following Facebook post, on the page of DH’s editor, issued today, is republished below. For context and a fuller picture, see DH’s recent report on the manipulation of Yiddish by the state’s commission reponsible for promoting the Double Genocide movement in the European Parliament and beyond.

Kerler’s 9 August Lecture on “Yiddish: A Language in Contact Within and Without” Open to Public

Posted on 6 August 2017 by Defending History

VILNIUS—Professor Dov-Ber Kerler, deeply involved in the 2010 purge of Vilnius Yiddish Institute staff (including his own former doctoral supervisor at Oxford) for having disagreed with some Lithuanian government policies on the Holocaust, and in an alleged ongoing effort to obfuscate the history of Yiddish studies at Oxford and Vilnius, will be lecturing this Wednesday, 9 August 2017, at the new Judaica Research Center at Lithuania’s National Library in Vilnius. He is the head of the leading American Yiddish graduate studies program, that currently produces more Yiddish Studies doctorates than any other, at the Borns Jewish Studies Program at Indiana University at Bloomington. The topic of the lecture is “Yiddish: A Language in Contact Within and Without” on which Prof. Kerler has carried out pioneering research for decades. The event is open to the public free of charge. The lecture is underwritten by the government’s Ministry of Culture. More details are available on the Center’s Facebook page. Professor Kerler is also a specialist on Ethics in Yiddish Studies. He was honored for his efforts by a popular t-shirt in Lithuania. 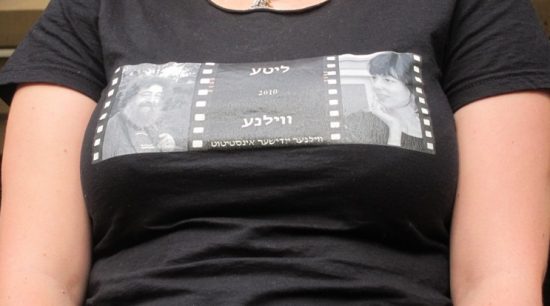 Is Prof. Krutikov the Latest Lithuanian Gov. “Yiddish Star” to be Manipulated?

Posted on 16 September 2017 by Defending History

VILNIUS—Beware of any academic conference hosted by a nation’s parliament. This isn’t about Lithuania, the Baltics, or Eastern Europe. It’s about the intellectual independence and academic integrity of bona fide academic conclaves anywhere. There are elementary questions. Was there a public call for papers? Was there an academic committee established to select those papers by the most competent specialists on the actual topic of the conference? An academic committee that would guard against the petty jealousies, politics of revenge and personal exclusions, as well as larger political correctnesses or state-sponsored-agency attempts to predetermine the proceedings or (ab)use them for governmental PR? Is the conference a free tribune for the exchange of ideas in an atmosphere of collegiality and mutual respect? One where scholars of opposing views can thrash it out, robustly and publicly — without the loss of interpersonal respect — to yield positive results for the area of human enquiry to which the conference was dedicated in the first place. One of the ironies is that Vilnius is nowadays host to some of the world’s best (and most academically free) conferences in an array of fields, both in the humanities and the sciences. That Soviet-style rigging should survive in the case of Judaic studies, of all things, will itself be studied one day.

Posted on 1 October 2019 by Defending History

CAN GOVERNMENT AGENCIES STILL WRITE INDIVIDUALS OUT OF HISTORY IN POST-SOVIET SPACE? DO VILNIUS UNIVERSITY’S DEANS AND RECTOR APPROVE OF THE PRACTICE? CAN A PAST PROFESSOR WITH A PERFECT RECORD OVER 11 YEARS (NO COMPLAINTS, NO INCIDENTS) BE WRITTEN OUT OF THE UNIVERSITY’S HISTORY AND DEFAMED IN THE UNIVERSITY’S NAME ON ORDERS OF SOMEONE AT THE “INTERNATIONAL COMMISSION FOR THE EVALUATION OF THE CRIMES OF THE NAZI AND SOVIET REGIMES IN LITHUANIA” (THE “RED-BROWN COMMISSION“)?

A “for the record” page in progress, developed in response to repeated public statements by the current director of the Vilnius Yiddish Institute, a member of the state-sponsored Commission on Nazi and Soviet crimes, claiming that Defending History’s editor (a) was never a professor at the university, (b) if he was an elementary Yiddish alphabet teacher paid by some surfers in California, he got fired for not turning up to work. Further documents are being processed for inclusion in the bizarre but curiously telling chapter of the history of Yiddish Studies in the 21st century. The political manipulation (ranging from West European far-left to East European far-right) of Yiddish-less “Yiddish” is a theme in the final chapter of Yiddish and Power (Palgrave Macmillan 2015) by the Yiddishist in question, Dovid Katz.