Sources in Bloomington, Indiana and Vilnius, Lithuania, confirmed this week that Dr. Daniel R. Berg, an eminent physician in the greater Bloomington area, has resigned from the rump “Board of Friends” of Sarunas Liekis’s “Vilnius Yiddish Institute” (VYI). The institute’s website abruptly removed Dr. Berg’s name and photograph from the board. No letter of resignation was released to the media, but a source close to the doctor said he was dismayed to see the institute’s resources being dedicated to a campaign of defamation against its own former Yiddish professor and founder, whose name and contributions have been deleted from the historic faculty page, in the classic Soviet style of revising history.

The “Board of Friends” is distinct from the “Honorary Board of Directors,” which still includes right-wing Lithuanian MEP Dr. Laima Andrikienė, who signed the Prague Declaration inspired proclamation of 23 September 2008. It is one of the documents of the Double Genocide movement that seeks to achieve “sameness” in the way all aspects of Nazi and Soviet crimes are treated by the European Union. On the ground, outcomes have included a double-edged effort to discredit Holocaust survivors who joined the resistance while elevating to hero status local Nazi perpetrators on the grounds that they were “anti-Soviet activists.” An antisemitic, homophobic “envelope artist” also singled out Andrikienė and one other MEP for praise for standing up to “traitors of the people” on LGBT rights (more on the envelope maker below).

It is not known if Mr. Spielberg is aware of the degree to which the Vilnius Yiddish Institute has been entangled in elite efforts to provide cover for Baltic Holocaust revisionism and the far right more generally. The scandal reached its peak in 2008 when police in Vilnius came looking for the institute octogenarian Holocaust survivor librarian on what proved to be kangaroo charges of “war crimes.” At the time, the Economist referred to the episode as “blaming the victims.”

The Yiddish institute was then purged of its own Yiddish professor, Dovid Katz, in 2010, after the professor had mobilized the Western diplomatic community in Vilnius in opposition to Lithuanian government efforts to prosecute Holocaust survivors. 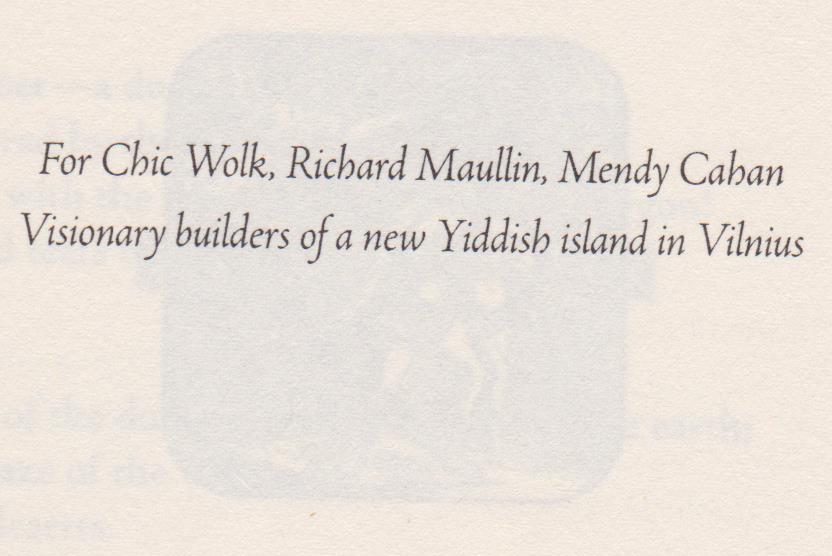 Liekis, a famous historian in his own right, is the son of Algimantas Liekis, whose works have formed the basis for attempts to redefine the Lithuanian Activist Front (LAF) and Provisional Government (PG) Holocaust collaborators/perpetrators of June, July and August 1941 as misunderstood national heroes. It was too much even for the state-sponsored Genocide Center’s historians.

Professor Liekis Jr. who heads the Yiddish institute has criticized Holocaust survivors in Israel who have asked for justice for war criminals, as well as a group of Litvaks who signed a polite letter of protest during one of the government’s “Jewish PR” events in London. But he has yet to publicly disown, howsoever politely and diplomatically, his father’s large corpus of published work sanitizing some of the initiators and cheerleaders of the genocide of Lithuanian Jewry in 1941. He has yet to go on the record about the related attempts to celebrate June the 23rd as a national holiday or the street names and monuments that already do so.

On the issue of purging the institute’s professor of Yiddish (then the last Jewish professor in Lithuania), a group of six Western (EU/NATO) ambassadors had written to the Board of Friends of the Vilnius Yiddish Institute in 2009 (with notifications sent to each board member). This was followed by a separate letter from the Israeli ambassador. No reply was received. The ADL’s Abe Foxman wrote separately, in a letter forwarded to the board.

The disemployment of this website’s editor, who had been working on Lithuanian-Yiddish academic projects since 1990, was facilitated by his own former student Professor D. B. Kerler, one of America’s major Yiddish poets, also of Bloomington, via a clandestine plan for a Bloomington-Vilnius consortium that would replace the Yiddish professor in Vilnius with short-term visitors from the Bloomington Borns Jewish Studies Program at Indiana University and others, usually Soviet-origin Israelis, recommended from Bloomington. In the document, the professors of the day mentioned are all called professor except for the one whose disemployment was in train (Freudian slip of the keyboard?). Even as the project was (successfully) identifying Kerler as a potential “PR replacement” for the poet’s former dissertation supervisor, who brought him to Oxford in 1984, the former supervisor was, some say rather naively, publishing lavish tributes to his old student’s accomplishments (part I; part II). Now the Bloomington bard is both tenured professor of Yiddish at Indiana University’s Borns Jewish Studies Program, running a successful Yiddish doctoral program, and bedrock of the Lithuanian nationalists’ jewel-in-the-crown summer course in summer-funtime Vilnius. He is featured on a handsome collectible t-shirt that reads “Lithuania” and “Vilnius” in Yiddish.

THE DOCUMENT THAT WAS NOT SUPPOSED TO LEAVE BLOOMINGTON.

IT ALLEGEDLY MISSTATES THE HISTORY OF THE VILNIUS YIDDISH INSTITUTE IN THE EFFORT TO DISEMPLOY ITS FOUNDING YIDDISH PROFESSOR AND CREATE A SUMMER-IS-FUN STATION FOR BLOOMINGTONERS. BY CASHING IN ON THE NATIONALIST INTRIGUES IN VILNIUS AGAINST THEIR OWN FORMER TEACHERS.

In 2012, the institute, by then bereft of Yiddish for about eleven months a year (outside the summer course) failed to respond to an exhibition by an antisemitic, racist, homophobic, Holocaust-revisionist envelope artist several yards away. Nor was there comment from the Board of Friends or the Honorary Board of Directors. Nine young Lithuanians defied university authorities and came out to protest peacefully at the exhibition’s opening. As noted above, one of the Yiddish institute’s board members, an MEP, is singled out for praise for opposing LGBT rights in one of his creations (samples of his work).

Also in 2012, Professor Liekis (Jr.) was appointed to the Lithuanian’s government’s “red-brown commission” which officially supports the 2008 Prague Declaration (the commission’s full proper name is: The International Commission for the Evaluation of the Crimes of the Nazi and Soviet Occupational Regimes in Lithuania). The Prague Declaration is considered the foundation document of the Double Genocide movement. Professor Liekis told the Lithuanian media that the commission’s purpose is to provide

“a symbolic reply to Russian propaganda attempting to portray Lithuania as an actively fascist state.”

It is not clear if the Yiddish institute’s “Board of Friends” is given a similar spiel. Sir Martin Gilbert, Professor Dov Levin and Professor Konrad Kwiet are among those who have resigned in principle from the commission’s network. The commission is a state-funded body whose existence has caused some pain to Holocaust survivors for a decade and a half. It has been closely involved with underpinning the Prague Declaration, the central document of the Double Genocide movement, for some years. More recently, the commission’s website has called a beloved Vilnius survivor (and speaker of superb Vilna Yiddish) a liar for daring to correct a mistake. Hopefully, this latest victim of state defamation, Professor Pinchos Fridberg, will be introduced to Yiddish students visiting Lithuania.

In November 2013, Liekis used a Philadelphia, PA appearance to tell his audience that this website’s editor, Dovid Katz, had never been professor at the institute. Indeed, the historic staff page of his institute is suitably purged. After his rapid rise in the ranks of the Lithuanian government’s informal Jewish affairs team, Liekis was also appointed dean of the faculty of diplomacy and political science at Vytautas Magnus University (VMU) in Kaunas. VMU continues to feature a lecture hall and bas-relief honoring the 1941 Nazi puppet prime minister who signed documents confirming the orders for Jews of his city to be sent to a “concentration camp” (in fact the Seventh Fort’s murder site), and later, an other order for the remainder to be incarcerated in a ghetto. An international petition on these and other shrines to Nazi collaborators is underway.

Did Soviet-style airbrushing of purged colleagues out of history end with the USSR’s demise? Did someone forget to re-adjust the layout? Was this a misprint in 2004 and 2010?

The use (and abuse) of Yiddish for Baltic nationalist politics remains to be studied, particularly its potential for serving the cause of exporting  — “under cover of Yiddish” —East European Holocaust Obfuscation. The most recent recruit to “summer glories of Vilnius” is the esteemed academic master of older Yiddish literature, Professor Jerold Frakes of the University of New York at Buffalo. Professor Frakes added to a recent Yiddish book on Vilna (titled “Jerusalem of Lithuania”) a single English chapter containing a sanitized and some think skewed version of the history of Yiddish at Vilnius University now cherished by government operatives. The narrative seems carefully monitored to help deconstruct the biography (life) of the colleague who gave a lifetime to build the program in Oxford and then move and rebuild it in Vilnius (including the summer course, from 1998), to ahistorically elevate Bloomington-Borns in the Disneyfied PR tale, while wholly omitting, incredibly, the historic events of recent years that have everything to do with Yiddish, Vilna, the Litvak heritage and its tragic fate. It is not irrelevant that Yiddish studies in a Holocaust-site city is enlisted to cover for Holocaust revisionism, where a major red-brown commission figure is also “director of the Yiddish institute.” There is surprise that a scholar so careful about details of Old Yiddish texts as Professor Frakes could be so rapidly manipulated, without fact checking or obtaining information from diverse parties, or even from his own prior knowledge and writings. Collectors are scrambling to snap up the hard-cover edition of Frakes’s  Jerusalem of Lithuania, which appeared in 2011. It is not to be confused with other books carrying the same main title.

The Buffalo-based professor was this week appointed to the summer course faculty for 2014, though the page about his appointment curiously omits this one book that is in Yiddish and all about the city where he is appointed. It also omits any mention of his first summer at Vilnius, 1998, when he attended as a student. Presumably, as someone who loves Yiddish and the annihilated Yiddish-speaking Jewry of Vilna, he will now speak up publicly about the Prague Declaration, the red-brown Commission, the lingering defamation of Jewish partisan veterans, neo-Nazi independence day marches, the honoring of collaborators and perpetrators in town, and the dismissal of his own former Yiddish teacher (now brushed out of the history of his new summer home).

Purged of teachers of Litvak origin, the Yiddish program promises that “by the end of the course, students will be able to read medieval and early modern Yiddish in both modern text editions and from original manuscript and early printed books.” As for current Yiddish, the institute’s page for that has now been purged too, essentially leaving one living Yiddish author — “Boris Karloff” (D. Kerler).

The nationalist historians running the “Jewish” show are said to be ecstatic about their newest catch. Professor Frakes can expect the red carpet and glittering meetings with high officials. With his compliant history of Yiddish at Vilnius University under his belt, there may be a medal or two down the road.

A wider, and for some intellectually compelling question, concerns the degree to which comfortable, and usually respectful, Western academics can be easily entangled in local East European intrigue by “specialists” who enjoy state financial support. The manipulation of Yiddish by the New Far Right of Eastern Europe in the twenty-first century may itself be memorialized as an ironic footnote to an earlier history of involvement with rather different political orientations.

An employee who asked not be identified, said today: “We lost one fish and found another before Christmas. That is how it goes.”

Map of the Holocaust in Lithuania. Place names. Resources.