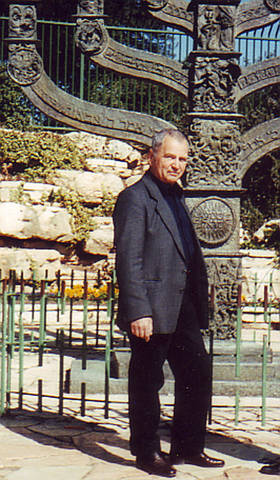 Just before the war between Germany and the USSR began, a part of Yivo’s property had been evacuated to the United States, another part was stolen and removed to Germany by the Nazis during the occupation of Lithuania (and after the war it made its way to the USA), a considerable part of Yivo’s assets was destroyed in Vilnius during the war, and only the smallest part, having survived through the Holocaust, remained in Lithuania. In a sense, Yivo’s destiny reflects the destiny of Lithuanian Jewry: nowadays there are very few Jews living there. According to the Soviet census report of 1959, the Jewish population of Lithuania was 24,672. According to the census report of 2001, it was 4,007, so within 52 years the number of Jews decreased by 84.1%.

As you can see, after the war Yivo could not be revived in Vilnius, and history itself made its New York branch the world’s leading research center for Yiddish language, literature, culture and history, as well as a great monument to a whole generation of Jews exterminated in the cities and towns of Lithuania and other countries, and in the European death camps.

This is the institute that you are in charge of.

The reason why I am writing this Open Letter is that you have invited the minister of foreign affairs of Lithuania, Audronius Ažubalis, to the commemoration of Jewish victims scheduled for 22 September 2011, in New York City.

Last autumn Ažubalis made an antisemitic statement, saying that “everybody knows who needs this law [of Lithuanian citizenship ― M.C.] most of all”. Then the minister went on to explain that the law was being pushed mostly by Jews of Lithuanian origin, because, as he claimed, they hoped to get their property back in this way.

Ažubalis’s words resulted in the Jewish Community of Lithuania appealing to the president of Lithuania, Dalia Grybauskaitė. The community was deeply concerned over the antisemitic tone of the minister’s remark. Jerusalem of Lithuania, the newspaper issued by the Jewish community, published the text of the community’s appeal in Lithuanian, English and Russian (issues 3 and 4 of 2010, p. 6).

The president of Lithuania ignored the appeal. The minister of foreign affairs did not apologize for his words. Instead, he provided the mass media with lame excuses.

Unfortunately, Ažubalis’s statement is not the only manifestation of antisemitic attitudes that transpired in Lithuania since the Seimas (Lithuanian parliament) had passed the resolution to declare the year of 2011 as the Year of Remembrance for the Victims of the Holocaust in Lithuania.

A week after this resolution had been passed, the Seimas passed another resolution: to declare the year of 2011 the Year of Commemoration of the Defense of Freedom and Great Losses. In accordance with this resolution, the anniversary of the uprising of the white armbanders (Lithuanian pro-Nazi “partisans” of 1941) is being celebrated. Among the white armbanders there were many murderers who began robbing and killing Jews in the first hours of the war. They were killing Jews throughout Lithuania. These very Jews, killed by white armbanders on their own initiative or upon the Nazis’ order, were among the owners of the property that must now be returned to their heirs. It is this property, not the redressing of a historical injustice, that the minister of foreign affairs, a member of the Homeland Union ―Lithuanian Christian Democrats faction in the Seimas was worrying about. Is he the only one? Didn’t a senior official from the ministry of justice say: “First we shall return property to the Lithuanians, and then to the Jews”? 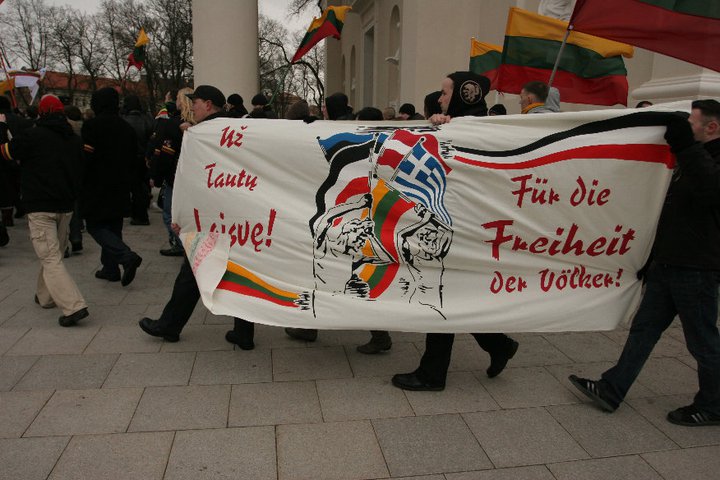 Despite the public protest, Kazimieras Uoka, also a member of Homeland Union ― Lithuanian Christian Democrats managed to get the city council’s permission, once again, to hold the annual march of neo-Nazis along Vilnius’s main boulevard. On Lithuania’s Independence Day more than 500 youngsters marched, holding banners with Nazi and racist symbols. On both sides of the column people were carrying banners with the symbol of the “White Power” racist organization and a German motto that neo-Nazis are so fond of. Among the participants there were not only voluntary participants from the Lithuanian army but even Ričardas Čekutis — a research “specialist” who is an employee of the Genocide and Resistance Research Center of Lithuania. 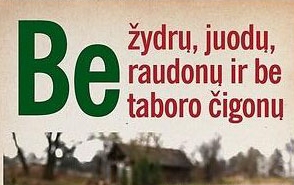 Mr. Brent, just think whom these volunteers will defend and what sort of academic discoveries can be made by a person marching in a column with neo-Nazis and shouting “Lietuva ―Lietuviams” (Lithuania for Lithuanians!) along with them. When he worked as assistant for a candidate member of the Seimas, Čekutis was conducting her election campaign using the following slogan: “Be žydrų, juodų, rauduonų ir be taboro čigonų” (Without the blue [i.e. gay], black, red and without a gypsy camp). The xenophobic sense of the slogan hardly needs to be clarified.

A month before the Vilnius march — on February 16 (the date when The Act of Independence of Lithuania was signed, in 1918), a similar skinhead demonstration took place in Kaunas.

Every year Jewish cemeteries and Holocaust mass-murder sites suffer from numerous acts of vandalism. None of the vandals has ever been found by the police.

It has recently come to be known that the prosecutor general’s office is preparing a new “case” and we learn that this time it is aimed at Joseph Melamed, a respected individual and Holocaust survivor who has been chairman of the Association of Lithuanian Jews in Israel for many years.

Mr. Director, I cannot but remind you that the prosecutor general’s office has already conducted similar campaigns aimed against former World War II Jewish partisans in Lithuania — Yitzhak Arad, Fania Brantsovsky and Rachel Margolis. Significant international protest followed. Those protesting include prominent scholars and specialists in the history of the Second World War. The prosecutor general’s office discontinued the investigation of “crimes committed during the years of World War II by the ‘Vilnius’ Soviet partisan unit […] in connection with the lack of collected evidence to prove initial allegations”.

Yet, discontinuing a case does not mean closing it. It only means that the prosecutors have temporarily stopped the investigation concerning these former Jewish partisans, but they can reopen it “in the light of new circumstances” whenever they want.

Now Lithuanian prosecutors are trying to find grounds to add Melamed’s name to the three names mentioned above. Preliminary steps are being taken. It is possible that the “evidence” might come up, as “strong” as it was in the previous cases.

When the president of the Federal Republic of Germany awarded Fania Brantsovsky the Federal Cross of Merit (that nation’s highest award) in 2009, Kęstutis Masiulis, a member of the Homeland Union ― Lithuanian Christian Democrats’ party faction of the Seimas, called this conferral of the award humiliating and insulting to Lithuanians. “We, Lithuanians, have been very sensitive to these kinds of things — the Soviet terror wound has been bleeding”, said the MP. However, he did not explain what Fania Brantsovsky’s award has to do with the “bleeding wound of Soviet terror”.

People who do not know why Jews had to take weapons into their hands during World War II need an explanation. Under the conditions of Nazi occupation any Jew, regardless of sex, age, social status and political views, faced the choice: either to accept the “final solution of the Jewish question” and patiently wait for death at the hands of Nazi executioners and their local accomplices, or to arm themselves and join anti-Hitler forces to struggle against the Nazis, defending their own lives and the lives of the Jewish people.

Dear Mr. Director, in Lithuania there were 22 armed police battalions equipped by the Nazis. Their main goal was extermination of Jews from ghettos and concentration camps not only in Lithuania but in other countries as well, and of partisans who fought on the side of the anti-Hitler coalition.

On 27 January 2009, during your visit to Vilnius, you spoke at the event dedicated to the memory of Holocaust victims. I remember your words: “The past we are speaking about is the darkest enigma of humanity.”

I cannot agree with you that this past — the killing of six million Jews just because they were Jews — is a “dark enigma”. There is nothing enigmatic about their murder, neither is there anything strange in the fact that the Holocaust might recommence any day if the forces that we don’t need to name get the green light.

Don’t you know that in Lithuania none of the Nazi accomplices was subjected to punishment? Fourteen collaborators were deported from the United States to Lithuania in the 1990s and 2000s. None of them was punished. Due to different reasons, more than ten people suspected of murders of Jews during World War II voluntarily returned to Lithuania after independence, and they were not punished either. Moreover, during the 1990s rehabilitation of victims of Stalin’s political repressions there were also people who were rehabilitated and given considerable monetary compensation for suffering in Stalin’s labor camps — people who had taken direct part in the murder of Jews. Later, due to European and American public protest, the political rehabilitation of these persons was annulled.

Being a citizen of Lithuania, I find it disturbing that antisemitism still exists in Lithuania, and so does sympathy toward Hitler, Nazism and Nazi symbols. Surf the Lithuanian Internet and you will see it: if the word “Jew” is mentioned in any article on any subject, within several hours hundreds, sometimes more than a thousand comments on this word appear, many of them derogatory antisemitic statements. One can easily find ultranationalist and Nazi web pages.

In comparison with the above-mentioned, Mr. Ažubalis’s statement might seem but a small coin thrown to a crowd of antisemites, xenophobes etc. But when the minister of foreign affairs claims in his speech that “it is Jews who need the citizenship law most of all” it sounds as not just an excuse for the state’s unwillingness to pass the law, but also as an encouragement of antisemitic sentiment in Lithuania.

So, for the sake of the memory of more than 200,000 Lithuanian Jews who died during the war, I am asking you to withdraw the invitation sent to the minister of foreign affairs of Lithuania for him to participate in the memorial event. We, Holocaust survivors, and the next generations, are responsible that the Holocaust never happen again — to Jewish or any other people on earth.