Through the good offices of the Borns Jewish Studies program at Indiana University (Bloomington), and its Dr. Alice Field Cohn Chair Yiddish studies professor, D.B. Kerler (“Boris Karloff”), who allegedly knifed his own doctoral supervisor in pursuit of a summer position in Vilnius (despite having a tenured position in the US), a comrade Soviet-Israeli self-publishing Yiddish poet has been announced as visiting professor of Yiddish on the home page of the Vilnius Yiddish Institute. Both have in some views allowed themselves to be instrumentalized by the right-wing Holocaust-revisionist establishment that seeks to cover for state policies including rampant antisemitism and the “Double Genocide” campaign via events and stunts in the field of Yiddish and Jewish studies.

According to the announcement, Dr. Velvl Chernin is now the “visiting professor” of Yiddish at the Vilnius Yiddish Institute, which was purged of full-time Jewish staff in 2010 and has been criticized for being Yiddish-free for eleven months of the year.

That situation has apparently now been remedied by the appointment of Dr. Chernin, who, it is announced,

“joined the VYI in its aim to teach students from Lithuania and around the world who want to study Yiddish and allied subjects in the culture’s native milieu, benefiting from proximity to the human, cultural, architectural and natural environment of Jewish Lithuania. Together with members of the VYI’s core team Dr. Chernin is working to fulfill the international need of joining the profound immersion in the East European Jewish studies with high academic standards.” 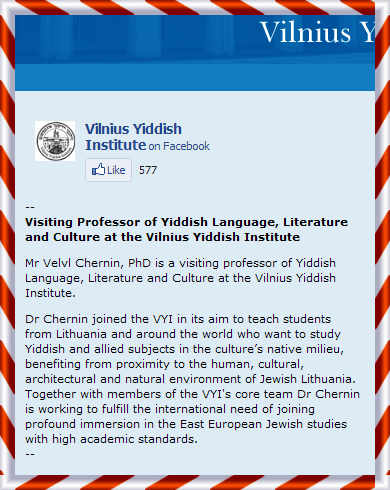 In the meantime, Vilnius University continues to exhibit and provide a permanent home for the “envelope art” of a graphic designer best known for his antisemitic, racist, homophobic and anti-tolerance envelopes, which were on sale for many years at the city’s central post office.

For some years, the Double Genocide movement has allegedly made use of Jewish and Yiddish projects to cover for its efforts to downgrade the Holocaust and its toleration of antisemitism.

Not long ago, nine young Lithuanians demonstrated on the Vilnius University campus against the bigot’s exhibition’s opening. There has to date been no comment from the Yiddish institute, its California based Board of Friends, or the Borns Jewish Studies program that supported the purges of staff. The Borns program is also home to the Institute for the Study of Contemporary Antisemitism, which has yet to issue any public statement on the antisemitic art exhibited at a partner institution of its parent program at Indiana University.

It is not known whether Dr. Chernin, a former executive vice president of the Russian Jewish Congress and Yiddish teacher in Moscow, has issued a statement about the exhibition at his new university. There is no indication yet on the university’s website about which Yiddish Studies courses the new professor is offering, in which semester, in what language, and for how many credits. Yiddish students in Lithuania, in need of professional academic help, have thus far reported failing to find the new professor within the country’s borders. The relevant details will no doubt be made public soon.

Dr. Chernin lists his permanent residence as “Kfar Eldad, Judea and Samaria” and various sites call him “head of the settlement.” It is not known if he is relocating to Vilnius for an academic year or longer to carry out the duties of the new visiting professorship in Yiddish studies at the Vilnius Yiddish Institute, and if so, who will step in as acting head of the Kfar Edad settlement in the West Bank.

Back in 2002, Dr. Chernin blasted what he considered to be a central tenet of the Vilnius Yiddish Institute: its alleged “symbolic significance to non-Zionist Yiddishists in the West of Vilnius as the ‘Jerusalem of Lithuania’ (even some Israelis join in the Yiddishist activities in Vilnius).” He will no doubt in 2013 reveal his carefully reconsidered and reconstructed views on these issues, now that he has joined his own defined category of “even some Israelis” . . .

“Yet there is still some activity, and in Lithuania it has even gained world standing due to the program for Yiddish teaching at the University of Vilnius, headed by the renowned Yiddish linguist Hirshe-Dovid Katz, U.S.-born and former lecturer at Oxford University. This program draws students from outside the borders of the former Soviet Union because of Professor Katz’s personality and the symbolic significance to non-Zionist Yiddishists in the West of Vilnius as the “Jerusalem of Lithuania” (even some Israelis join in the Yiddishist activities in Vilnius).

This is the town in which the famous YIVO Institute was established – the flagship of Yiddishism, now situated in New York. These ideological trends were in accord with the line led by Emmanuel Zingeris, one of the present-day Jewish leaders, formerly connected with the Jewish Historic-Ethnographic Society and among the young writers of Sovietish Heimland. Yet he has always advocated ‘Litvak patriotism’ and a separate Litvak identity. It is typical that already at the end of the 1980s, Emmanuel Zingeris answered my question about his aspirations and the reason for his not wishing to come to Israel: ‘I want to erect a monument on the grave of Lithuanian Jewry.'”

It is also not known whether or to what extent right-wing politics, in Israel, Lithuania, or both, have played a role in the recent instrumentalization of Yiddish and Jewish studies in the cause of Lithuanian government PR. The question arose last month in connection with the “Menachem Begin Jail House Rock” plaque at a Vilnius prison.

Meanwhile, it has been announced that the Yiddish institute’s director, Professor Sarunas Liekis, has been appointed to the Lithuanian government’s  “red-brown commission” which has been a staunch supporter of the 2008 Prague Declaration demanding “equality” of Nazi and Soviet crimes. The commission is formally known as “The International Commission for the Evaluation of the Crimes of the Nazi and Soviet Occupational Regimes in Lithuania.” In an interview with the Lithuanian press, the Yiddish institute’s director recently made clear his views on the commission’s purpose.

Extract from the original 2009-2010 plot to replace the Yiddish professor who spoke out for the accused Jewish partisans (and was discontinued in 2010) with the “Bloomington-Borns plot line.” Entire document here. Report here. 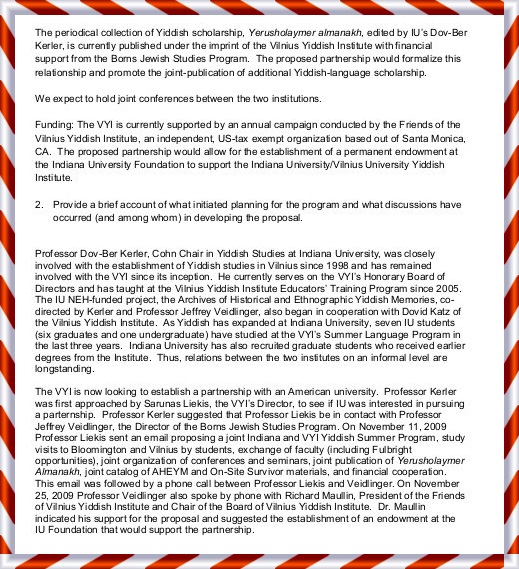