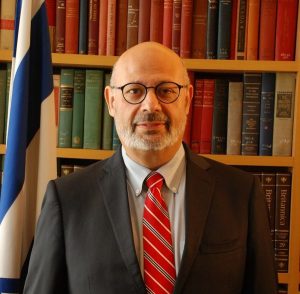 
KIEV—On September 22, Ukraine’s Azov Battalion had a ceremony honoring its fighters who were killed in combat in eastern Ukraine’s Donbass regions. It is natural for any military unit to honor its dead. But it is evident from the images on Azov’s own website that this ceremony used iconography that is disturbingly reminiscent of the 1930s Nuremberg rallies, including the use of searchlights, the banners with Waffen-SS stylized logos and the flames.

Posted on 1 October 2018 by Defending History

In this week’s (30 Sept.) edition of Fareed Zakaria GPS, the CNN host interviewed Ukraine’s president Petro Poroshenko. The conversation stressed Ukraine’s appreciable progress in spite of (in some sense — because of) Vladimir Putin’s aggression, revanchism and incessant mischief-making.

In a website supplement, the CNN host recently posted some tough questions on state corruption that he did indeed put to Ukraine’s leader. But did Fareed miss an opportunity to bring up something else, something that so much of the Western media is keeping under wraps to the point of rendering it strangely unmentionable?

Will a major Western journalist follow up with the Ukrainian president along the lines of:

KIEV—As DH readers know, the government of Ukraine led by Volodymyr Viatrovych’s “Ukrainian Institute of National Memory” (UINP) has been engaged in a breathtaking campaign to whitewash the troubling backgrounds of two major World War Two fascist organizations, the OUN and UPA. While these organizations and their leaders are glorified by Ukraine for their fight against the Soviets, along the way they were also involved in mass atrocities against Jewish and Polish civilians. Moreover the OUN-UPA ideology was deeply antisemitic, and was based on Ukrainian Integral Nationalism (kind of a fancy way of saying: fascism). Viatrovych also seeks to glorify Ukrainian World War One-era nationalist leader Symon Petliura whose troops engaged in mass pogroms during the Russian Civil War which killed between thirty-five and fifty thousand Jews.

While not necessarily directly related to whitewashing agenda of “Historical Memory Commissar” Viatrovych, Ukraine has also seen an upsurge in major antisemitic incidents including the desecration of Holocaust memorial sites and monuments, frequently with the use of swastikas and other Nazi iconography.

After long remaining silent, Western leaders and major Jewish organizations seem to have finally noticed what’s going on. Fifty-seven US Congressmen recently signed an Open Letter condemning Ukraine, noting that much of this Holocaust revisionism is state-sponsored. The US Holocaust Museum also decried anti-Roma violence in Ukraine while noting that “he continuing effort led by the leadership of the government’s Ukrainian Institute of National Memory to praise certain leaders of the Organization of Ukrainian Nationalists (OUN) and the Ukrainian Insurgent Army (UPA) and cleanse their murderous records raises doubts regarding the government’s intentions.” Meanwhile the World Jewish Congress has sharply critiqued Ukraine for the upsurge in desecrations of Holocaust memorials.

The mayor of a town in Western Ukraine says the current government is a “Muscovite-Yid.” What’s striking is how he cites how Vyatrovych’s Institute to embolden and legitimize his views:

KIEV—As the Ukrainian Government continues its increasingly unrestrained state-sponsored Holocaust revisionism campaign led by Volodymyr Viatrovych’s Institute of National Memory (UINP), questions surrounding the Holocaust in Ukrainian education in post-Maidan Ukraine are increasingly coming up. Thanks to new research by the head of the Ukrainian Jewish Committee, Eduard Dolinsky, some clear answers are taking shape. And the signs are, in some critics’ views, a cause for concern.

According to a new book released by Viatrovych’s institute, it appears that the government is determined to present what can only charitably called an alternative view of “history”. Entitled A Compilation of Methodological Recommendations for Commemorative Observances in General Educational Etablishments, UINP’s 220 page book reduces the history of the Holocaust to a mere footnote.

Dolinsky has revealed to the West the contours of the “history” to be provided to millions of Ukraine’s young people in the coming years. Its salient points become evident from a number of sample features:

It sounds like something straight out of the wackiest conspiracy sites on the internet — but it may be true. The US Government — through its main foreign aid agency the US Agency for International Development  (USAID) — may indeed be inadvertently funding the Ukrainian Government’s far-reaching project to whitewash and glorify the Hitlerist World War II era nationalist OUN and UPA organizations, whose hordes were responsible for the murder of hundreds of thousands of Jewish and Polish civilians.

More Fake News, Again from Ukraine and Once More — About the Holocaust

While much is said in some American media outlets  about “fake news” in the US, the smallness of the matters being discussed might come into focus when compared with Ukraine, which is of late producing rather much fake news about the Holocaust and elementary points in World War II history.

Posted in Double Genocide, History, Media Watch, Museums, News & Views, Politics of Memory, Ukraine | Comments Off on More Fake News, Again from Ukraine and Once More — About the Holocaust

Posted on 10 October 2017 by Defending History

As reported on 7 October, the city of Kalush in Western Ukraine has named a street for Hauptsturmführer Dmitro Paliyiv, a key founder of the Ukrainian Waffen-SS Galizien division. The division enjoyed a visit  from Heinrich Himmler during World War II.

Posted on 14 April 2017 by Defending History

Efforts, masquerading as history, patriotism, political science, mainstream media, and even Holocaust studies, are enabled by the current geopolitical backdrop and a Western tendency to silently “give them all a pass”

Telling the Stories of the Forgotten Jewish Refugees of Ukraine

While antisemitism in France and other western European nations generates the headlines, the Jews of Ukraine are facing the greatest humanitarian catastrophe in the Jewish world in 2015. Thousands of Jews have been made homeless by the military conflict that has decimated their communities in Donetsk and Luhansk while both sides of the conflict bandy about casual accusations of antisemitism at their enemies for propaganda purposes, falsely turning the issue into a Jewish one.

Posted in News & Views, Ukraine | Comments Off on Telling the Stories of the Forgotten Jewish Refugees of Ukraine