“The [UINP] project is asking Ukrainians worldwide to add to its database,” the Saskatchewan branch of the Ukrainian Canadian Congress informed its members in December. On Facebook there is in fact an older “Ukrainian Necropolis in Canada,” created in 2015, which may well have inspired the UINP. (The Canadian project’s pictures of Nazi collaborators’ headstones can be found in the UINP’s “virtual necropolis.”) At the top of the Canadian Facebook page is a photo of a controversial cenotaph in Oakville, Ontario memorializing the Ukrainian Waffen-SS veterans buried there. Lev Golinkin wrote about Canada’s Ukrainian nationalist monuments last summer after the cenotaph became the subject of an international news story.

The Jerusalem Post article had little to say about the UINP project coordinator Pavlo Podobed. Last month he was referenced in this author’s Defending History opinion article, although not by name, as the “antisemitic husband” of Olena Podobed-Frankivska, who is the director of youth policy at the USAID-funded Ukrainian Reanimation Package of Reforms Coalition.

The Podobeds are both members of the Kyiv branch of the international Ukrainian Youth Association (CYM). Since its founding in 1946, CYM has served as a youth wing of the clandestine Organization of Ukrainian Nationalists-Bandera (OUN-B), which collaborated with Nazi Germany during World War II and has cooperated with far-right extremists in 21st century Ukraine. A few of the Ukrainian nationalist diaspora’s contributions to Lev Golinkin’s “Nazi Collaborator Monument Project” are located on CYM properties in the US and Canada.

As explained in the above-mentioned Defending History article, the OUN-B practically took over the UINP during Petro Poroshenko’s presidency (2014-19) via the Lviv-based “Center for Research of the Liberation Movement,” an OUN-B front that Olena Podobed-Frankivska used to work for. Pavlo Podobed is the head of the UINP’s Department for the Preservation of Places of Memory. As reported by Newsweek in 2017, since getting the job, he has “accused Jews of being the main perpetrators of Soviet crimes against Ukrainians in the 1920s and 1930s.”

Pavlo Podobed is simultaneously the board chairman of the Heroyika Charitable Foundation, based in Kyiv and Toronto, which partnered with the UINP on the “virtual necropolis” project. Heroyika is largely concerned with the construction and restoration of monuments and memorials in Ukraine dedicated to anti-Soviet veterans of the World Wars, although of course many more Ukrainians joined the Red Army than the Organization of Ukrainian Nationalists or the Waffen-SS. Heroyika has also funnelled several thousands of dollars worth of equipment to the military arm of the neo-Nazi “Azov” movement, including sights for snipers and at least four vehicles. 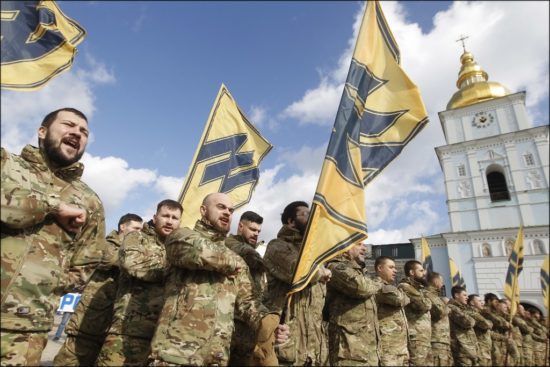 Three years after founding the Heroyika Charitable Foundation in 2010, Podobed was elected the head of CYM in Kyiv. In October 2014, Podobed voted for the neofascist Right Sector in Ukraine’s parliamentary elections. By October 2015 he became a high-level UINP employee and in 2016 signed an anti-LGBT petition championed by the leader of Right Sector. The extremist organization’s media arm interviewed Podobed twice in 2018.

Pavlo Podobed apparently spent several months in the United States in 2017. That spring in Chicago, he appeared at an event alongside Volodymyr Parasiuk, a notoriously violent far-right nationalist and former member of an OUN-B political party. On February 21, 2014, following the bloodiest day of the so-called “Revolution of Dignity” in Ukraine, Parasiuk made a speech on Kyiv’s Independence Square threatening a coup, which is widely believed to have spurred President Viktor Yanukovych to flee the country. At that time Parasiuk was a special militia company commander, according to political scientist Ivan Katchanovski, “whose snipers shot at the police from the Music Conservatory building [in Kyiv] and then at the both the police and the protesters from the Hotel Ukraine.”

Parasiuk and Podobed spoke at the event in Chicago almost three years after Katchanovski first published his explosive research on the “Snipers’ Massacre.” Six months later in Washington, Podobed spoke at a military history conference organized by the Center for US-Ukrainian Relations, a rather obscure but influential organization associated with the OUN-B. He participated in a panel discussion moderated by Lubomyr Hajda of the Harvard Ukrainian Research Institute.

In 2019, Podobed appeared in several videos by the Kyiv-based Prometheus Security Environment Research Center (PSERC). According to its website the Research Center is partnered with the Canadian government. Since late 2018, Poboded’s written all of the articles on the organization’s website, except the most recent one, which announced that the PSERC signed an agreement with the UINP and other entities to create an internet portal about Russian aggression in Ukraine.

The PSERC is chaired by Mykola Balaban. As a visiting fellow at the prestigious Vienna-based Institute for Human Science (IMW)’s “Ukraine in European Dialogue” program in 2018-19, Balaban wrote a short paper about the mass violence witnessed in Lviv in June-July 1941 as Nazi Germany invaded the Soviet Union. Meanwhile, Podobed appeared in two PSERC videos wearing a t-shirt glorifying the Nachtigall Battalion, a Wehrmacht unit staffed by the OUN-B that arrived in Lviv on June 30, 1941, and later that summer became Schutzmannschaft Battalion 201. Both formations were ultimately commanded by the Germans and participated in the Holocaust by Bullets in 1941, the year emblazoned on Podobed’s shirt. 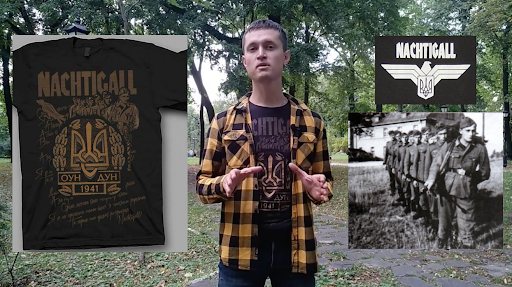 Pavlo Podobed and his Nachtigall shirt

Jeremy Sharon’s recent article in the Jerusalem Post appears to have dashed the hopes of some concerned Ukraine watchers that the far-right memory politics of the UINP might be significantly dialed back by Anton Drobovych, its director since December 2019. “I guess that Anton Drobovych hasn’t succeeded, or hasn’t tried, to tone down the glorification of [Nazi collaborators],” tweeted journalist Sam Sokol, who wrote an optimistic profile of Drobovych last year. In retrospect, by keeping people like Pavlo Podobed close, Drobovych’s failure to turn things around seems inevitable.