In a Facebook post, Ukraine’s Minister of Infrastructure Vladimir Omelyan announced his desire to build a literal “Road to Bandera.” After visiting the village of Ugrinov where Bandera was born and feeling the “insane energy of this place,” Omelyan decided that Bandera — whom he described as the “Great Guide” — should be honored with a new road. Added Omelyan, “We must remember and be with our heroes!”

For in-depth research on the legacy of Stepan Bandera, Defending History recommends Grzegorz Rossoliński-Liebe, Stepan Bandera: The Life and Afterlife of a Ukrainian Nationalist

What else is their to say except that the “insane energy” Omelyan felt in Bandera’s birthplace clearly impelled him to suggest an even more insane idea. (And we are left to wonder what Omelyan might want to build if he ever visits the birthplace of Shukhevych.)

The good minister’s Facebook post in translation (with our comments in [square brackets]), followed by the original:

During talks, we coordinated, argued about, and demanded the repair of more than one road:  Odessa-Reni, Mykolayiv-Dnipro, the Carpathian (Transcarpathia) region, L’viv-Odessa, Kharkiv-Dovzhanskiy…

But for me, the whole time the most important one was the route to Stariy Ugriniv. The road to Bandera.

I first visited the Great Guide’s [title for Bandera among his worshippers, analogous to Mao being called the Great Helmsman] birthplace only this year, although I’ve known about it and seen photographs of that part of the yard which has miraculously survived the upheavals of the 20th century, since childhood.

There’s insane energy — one gets the impression that the whole incredible family which was brutally exterminated by the Communist-Nazi Moloch [Biblical deity which received child sacrifice] still lives there, and will come out from around the corner of the dwelling to bless the visitor.  [He is  describing what it was like for him to visit Bandera’s birthplace].

We’re beginning to rebuild the Road to Bandera.  At the very least, we’ll completely renew 4 kilometers, and, if we can manage, all 8 kilometers to Stariy Ugriniv.

We must remember — and be with — our heroes! 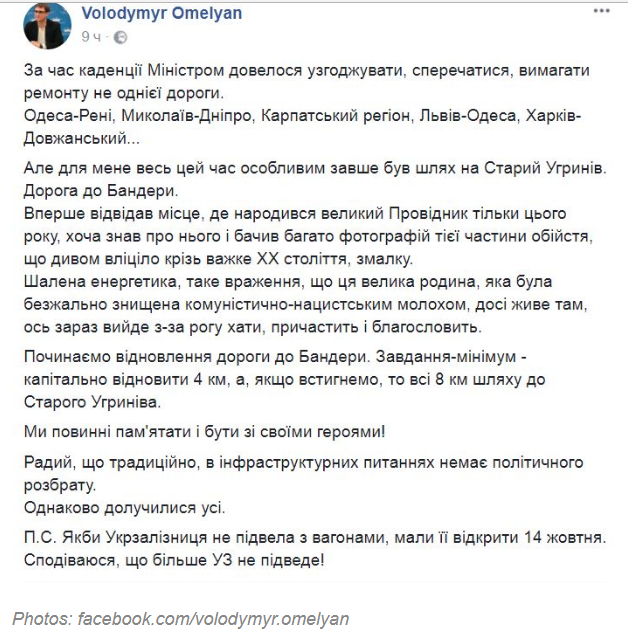