According to Lithuanian media reports, the nation’s parliament (Seimas) will be declaring the year 2021 to be dedicated to the memory of Juozas Lukša (Daumantas).

Let us assume for the sake of argument that the identification of Mr. Lukša (Luksha) as one of the brutal murderers of defenseless Jewish neighbors in an infamous photo of the Kaunas Garage Massacre of June 1941, best known from Joseph Melamed’s 1999 Crime and Punishment, published by the Association of Lithuanian Jews in Israel, is erroneous. Then, that the reference to Mr. Lukša in the text (p. 38) in a listing of perpetrators (known from a half century of testimonies from the survivor community), and a photo with other alleged collaborators (p. 105), are likewise mistaken. And that the information on the Association’s website, posted during Mr. Melamed’s lifetime, is also in error.

Let us even grant that there is no current courtroom-grade proof for the details of the following text from Holocaust survivor Alex (Alter) Faitelson, in his classic memoir The Truth and Nothing But the Truth: Jewish Resistance in Lithuania (Gefen Publishing House 2006, p. 34). It is a text that includes the author’s recollection from after the war: Lukša’s “photograph was found and shown to witnesses who were interrogated. They all confirmed his participation in the torture of Jews in the garage” (Lithuanian translation). Incidentally, in 1993, Mr. Faitelson was awarded a certificate of honor by Lithuanian president Algirdas Brazauskas. He was not some “enemy of Lithuania” who spent his time making up stories about people. He was a Holocaust survivor, heroic member of the resistance and escape, and renowned memoirist. 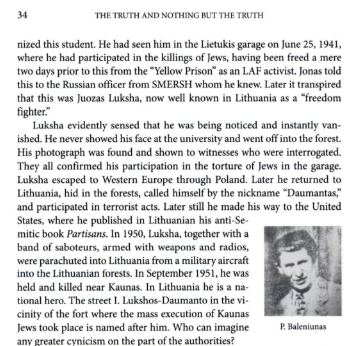 Let us moreover further assume that the 2011 British Parliament’s early day motion on the subject, citing the beheading of Rabbi Zalmen Osovsky, contains unsubstantiated allegations (they are also referred to in a 2012 Yad Vashem publication).

To stretch the chain of thought, let us even posit that Vilnius prosecutors had thoughts of pure justice and uprightness when they sent Interpol agents to disturb (in Tel Aviv) the late Holocaust survivor and elected president of the last association of Lithuanian Holocaust survivors in Israel, attorney Joseph Melamed, then in his high eighties, in 2011, for having “defamed” Lukša (and other alleged collaborators) in his published research.

Incidentally, there is an issue at stake that is at a crossroads of academic research, the law, and wider elementary ethics. Take a  hypothetical case where a number of Holocaust survivors who also spent over half a century documenting the memories of fellow survivors from their own place record that a no-longer living Mr. X participated in a Holocaust atrocity, but there is no convincing corroborating non-survivor source for what they write. Clearly the situation might well result in a Not Guilty legal verdict even in a posthumous trial. But we face a different question here: Are the published memories of Holocaust survivors so utterly useless and slanderous that multiple namings of a perpetator should not even merit mention when a national parliament of a successor state encompassing the scene of the crime decides to name a year glorifying alleged perpetrator (who like many perpetrators, may have done good works before and after the Holocaust)?

Taking it as given that there continues to be disagreement on all the above (and more), the question today, eighty years after the events, is, in fact, neither one of historical detail, nor of any legal status of anyone’s guilt.

It is another question, one of elementary ethics, European values and the cause of reconciliation. It is about the message being sent. It was in that spirit that a number of Western embassies in Vilnius, including those of Germany, Hungary, Norway and Sweden, stayed away from a 2009 event at the Lithuanian parliament honoring the publication of Lukša’s memoirs in English. The then Norwegian ambassador to Lithuania, Steinar Gil, put it this way at the time: “I have decided not to attend the presentation of the book. Whatever is true or false about the allegations, the fact remains that JL was active in the Lithuanian Activist Front, a clearly pro-Nazi, violent, antisemitic Holocaust-era organization.” When the LAF activist was made into a pure hero in another book, British author Peter Jukes responded with force.

And it was in that spirit that Lukša’s name was boldly included in a poem by the late and inspirational Lithuanian poet Aleksandras Bosas (online in English translation). Mr. Bosas, much harassed for his own heroism in standing up for the truth about June 1941, died before his time in 2014.

What message would be sent by the Lithuanian parliament (Seimas) once again honoring an active member of the pro-Nazi Lithuanian Activist Front whose barbarity in the week of 23 June 1941, including the days before the arrival of any Nazi German forces, is an indelible stain on European history?

Do a country’s Jewish Lives Matter, when the discussion is about the Holocaust, or was the genocide some ignorable, irrelevant detail in the perpetrators’ tales of valor and heroism?

This comes in the context of the last decade, including the Lithuanian government’s decisions to rebury with full honors, in 2012, the head of the 1941 Nazi puppet “provisional government” and then, to name 2018 for Adolfas Ramanauskas.  The attempts to erect a monument to Mr. Ramanauskas on public land in his American birthplace, New Britain, Connecticut, were roundly rejected by that town’s city council. Not because of specific evidence of crimes. Because it is is wrong to glorify in the public space participants in the Lithuanian Activist Front’s June 1941 Hitler-allied campaign of death, destruction and humiliation directed against Jewish citizens (see samples of eyewitness testimonies from which it is clear that most perpetrators were “just young men with no leadership positions”). Incidentally, even the Genocide Center’s own pages confirm Mr. Lukša’s participation in the LAF in June 1941 (as PDF).

The current parliamentary announcements come on the heels of the 23 June 2020 appearance by the chief historian of the state-sponsored Genocide Center flanked by large posters of two proven Holocaust collaborators, Jonas Noreika and Kazys Škirpa.

As ever, history will show, looking back on our time, who it was who was the real friend of the real Lithuania, explaining, as we do, that there is no good reason for such a choice in a solid EU democracy with a proud and noble history of a thousand years and innumerable true heroes — not least the inspirational Lithuanian citizens who risked everything to save a defenseless innocent neighbor from the LAF’s murderous hordes whose outbreak of mass murder, injury, pillage and humiliation of their country’s Jewish citizens got underway on 23 June 1941.