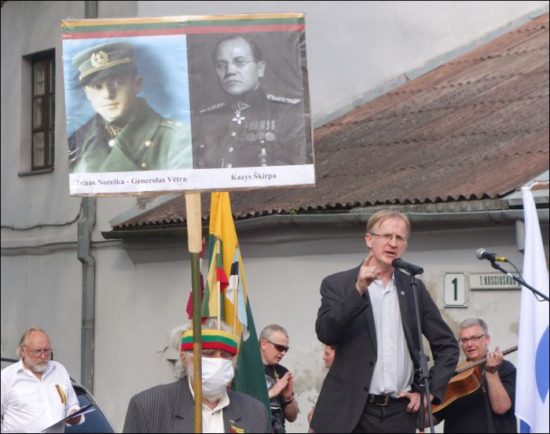 There was a third public event sandwiched between the morning Seimas press conference and the evening street event. In the afternoon, there was the annual distasteful public display of macho power extolling June 23rd in central Vilnius by loud, aggressive, and environmentally unfriendly far-right motorcyclists (reports in 15min.lt and lrt.lt; 2018 DH report).

The bad news is that the events had an imprimatur, of sorts, from the government. The motorcyclists’ celebration boasted a personal appearance by at least five members of parliament, and by Professor Vytautas Landsbergis, the famed founding head of state and retired longtime MEP. The most prestigious speaker at the morning and evening events was Dr. Arūnas Bubnys, the chief historian (formally “director of the genocide and resistance research department”) of the state-sponsored Genocide Center, one of Eastern Europe’s major centers of Holocaust Obfuscation, Double Genocide revisionism, and far-right whitewashing of Nazi collaborators as “anti-Soviet national heroes.” (See DH’s coverage of the Genocide Center over the last dozen years, a review of one of Dr. Bubnys’s books, and a piece on the city-center Genocide Museum which the center operates.)

Dr. Bubnys’s public address at the evening event, which was monitored by two editors at DefendingHistory.com, was held under a large poster glorifying two notorious Holocaust collaborators (see photo), the brutal perpetrator Jonas Noreika, and Kazys Škirpa, a founder of the LAF whose writings advocated the ethnic cleansing of Lithuania’s Jewish citizens.

This came just as higher echelons of the Seimas and Lithuanian government were attempting to “cleanse” the Genocide Center by announcing plans to dismiss its longtime director-general Teresė Birutė Burauskaitė and replace her with Adas Jakubauskas (reports in 15min.lt and LRT). This follows a series of international scandals culminating in the Genocide Center’s 2019 statement on the Holocaust (which the country’s official Jewish community has called institutionalized antisemitism), and its lame defense of Holocaust collaborator Noreika. The Noreika issue, brought to the English speaking world by DH’s Evaldas Balčiūnas in 2012, has in recent years been pursued with force in the Lithuanian courts by financial advisor Grant Gochin of California, and in the media by Noreika’s granddaughter, American author and educator Silvia Foti, whose book on the subject is in preparation. Gochin and Foti were the featured speakers at a virtual Town Hall organized in the United States earlier today. Mr. Gochin produces a Times of Israel blog, and Ms. Foti a well-known website.

Among the unsubstantiated rumors circulating here is one claiming that an attempt will be made by the ultranationalist factions in the Seimas and government to “concede something about Noreika” in order to “save” the national hero status of all the other glorified collaborators. This debate is closely linked to that of June 23rd which is for Lithuanian Holocaust survivors the day the Holocaust broke out and six hundred years of generally peaceful and tolerant coexistence turned to mass violence. Rumor would have it that “some concession” on Noreika — as if history were a negotiable mercantile commodity with bits and pieces of genocide to be “traded off” — might help clear the way for further “codification” of June 23rd, as a kind of national holiday, or become the subject of glorification by an “official year” (presumably 2021, the 80th anniversary), But any such plans were somewhat undermined today by the speeches in the Seimas and at the outdoor event, by Dr. Bubnys, who is also a key member of the state-sponsored “red-brown commission,” at the evening event under the shadow of posters of Noreika and Škirpa. (For the first time in its existence, even part the red-brown commission spoke out last year on one glorified perpetrator, Noreika, once international pressure left no choice). Incidentally, Dr. Bubnys made an ad-hominem attack in his speech this evening on DH’s editor, who was one of the two DH monitors silently observing and recording the event. The other was DH associate editor Julius Norwilla, whose photo gallery of the evening event has now been posted.

The small crowd was well-behaved and civil. The Vilnius police, as usual, did a superb job of keeping order and decorum.