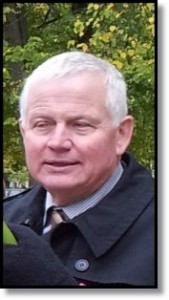 Editor’s note: These nine Lithuanian poems by Aleksandras Bosas (1951—2014) were chosen by Milan Chersonski, translated by Ieva Pukelytė-Mikutienė and edited by Stanley H. Barkan, director of Cross-Cultural Communications Press. Sincerest thanks to them all.

During his last days, Aleksandras Bosas, in addition to writing poems protesting the falsification of the Holocaust in his native land, participated in one demonstration in Ukmergė against a city-square monument that honors a local Holocaust perpetrator as “national hero” and another in Kaunas protesting the glorification of the 1941 “Lithuanian Activist Front” murderers of Jewish civilians across the land.

In his final years, Bosas was harassed by police and prosecutors for the stance he took on Holocaust history (see some of the coverage by Evaldas Balčiūnas). He was posthumously awarded one of Defending History’s seven Prophet Amos Awards for Human Rights in Lithuania for 2014-2015. These nine poems are from his final book of poetry, a collection of Holocaust-themed poems that appeared in Kaunas in 2014.