Marching with the Words: “No to Falsification of History!”

Posted on 2 July 2013 by Defending History

Authorized translation from the Russian by Ludmila Makedonskaya (New York)

In accordance with the law of the Republic of Lithuania for days of commemoration, June 23rd has been declared a national memorial day. It is the day of the 1941 June Uprising. As known, the extermination of the Lithuanian Jewish minority began on the same day as this “uprising.”

Trying to replace the honest historical memory of the Lithuanian people about the extermination of the Jewish community, today’s right and far right politicians are doing everything possible to convince the public that neither gunmen of the Lithuanian Activist Front (LAF), nor the Provisional Government (PG) together with its individual ministers were responsible for the massacre of the Jews. Lithuanian right and far right activists demand that June 23rd 1941 be recognized as a patriotic event directed exclusively against the Soviet occupation and aimed at restoration of Lithuanian independence. That would mean that the Provisional Government of Lithuania proclaimed on June 23rd 1941, was a team of like-minded Lithuanian patriots, who also endeavored to restore the independence of Lithuania.

The very word “patriotism” has become so commonplace that its actual meaning is being lost. Speculating actively over the concept of ​​patriotism has become one of the main methods of suppressing all dissent in the country. The attempts to understand the complex interweaving of historical events in Lithuania in the middle of the last century tend to encounter various sorts of obstacles. The attempts of some historians to determine the actual course of events during the Nazi occupation of Lithuania are becoming a risky proposition. A special article of the Criminal Code of the Republic of Lithuania was adopted in 2010 on how to evaluate very different historical events: “Article 170-2 of the Criminal Code of Lithuania. Public approval of international crimes, crimes of the Soviet Union or Nazi Germany  against the Republic of Lithuania or its people, their denial or gross trivialization.” Some historians even felt they had to abandon altogether the study of the period of Nazi occupation in Lithuanian history.

The right and extreme right-wing parties argue that nobody is responsible for the Holocaust in Lithuania. They say, “Of course, there was a small group of dregs of society in Lithuania, who were engaged in looting and killing Jews, but what country does not have them? The Jews are to blame themselves in their troubles, too,” the right and far right politicians say, directly or indirectly. The politicians from these camps shift all responsibility for the murder of the Jews during the Nazi occupation to the relevant Reich authorities.

But this year on June 23rd a group of young people involved in the international movement Antifa, organized an event. They turned to the municipality of Kaunas for permission to hold a protest against the falsified interpretation of this tragic chapter of the country’s history. They called their event: “No to Falsification of History!”  and determined to hold it in the center of the city, starting on Town Hall Square. They set out to protest against the falsified explanation of the deaths of more than 200,000 Lithuanian Jews during World War II.

The city administration, learning about the protesters’ aims and intentions, gave them the least appropriate day of the weekend, June 23rd, which this year fell on the Sunday coinciding with one of the most popular folk festivals,  Joninės. Traditionally, on these days the towns and cities are empty. But the group agreed to the date provided and invited people to attend on their website Antifa.lt.  The invitation reads as follows:

“The nationalistic organizations active  in Lithuania praise the June 23, 1941 rebels and the Provisional Government of Lithuania that they set up. But is there really something to praise them for? The Lithuanians Activist Front openly spread antisemitic propaganda, which created the myth of ‘Jewish guilt’  identical to the official Nazi line. It was openly declared in their leaflets that all privileges previously granted to the Jews are revoked, they must leave the country if they want to avoid ‘unnecessary victims’. Besides, they were called upon to finish off the ‘traitors’ of the Lithuanian state, taking their own measures.”

When the uprising transpired, the “white arm-banders,”  young Lithuanians, started to do the killing themselves, and the newly set up Provisional Government did not take any measures to block the way for further antisemitic propaganda and massacres that took place in Kaunas in broad daylight and established the Kovno Ghetto. The march “No to Falsification of History!”  will take place on June 23rd at 12 midday. We are gathering in front of Kaunas Town Hall at 11:30 AM. We urge you not to follow nationalistic propaganda blindly and to recognize the unvarnished history  and Lithuanian crimes.”

The same evening another call appeared on Facebook and other social media: “We call upon the Lithuanian people and all those who honor the memory of the ‘heroes’ of the June 23rd 1941 uprising, to gather at Kaunas Town Hall square and silently look into the eyes of the instigators who try to distort the history of Lithuania and deny the actual historic significance of the struggle against Bolshevism and the honest memory of what participants in that struggle then carried out.”

As expected, the streets were not as crowded on Sunday as on weekdays. Antifa marchers gathered at the edge of Kaunas Town Hall square. At the time permitted by the city administration they moved to the middle of the square, unfurled a black-and-red Antifa flag, which is recognized worldwide as the flag of this international movement, and a large banner, black with white lettering: “Real heroes rescued people instead of killing them. Remember the victims of the Holocaust.” 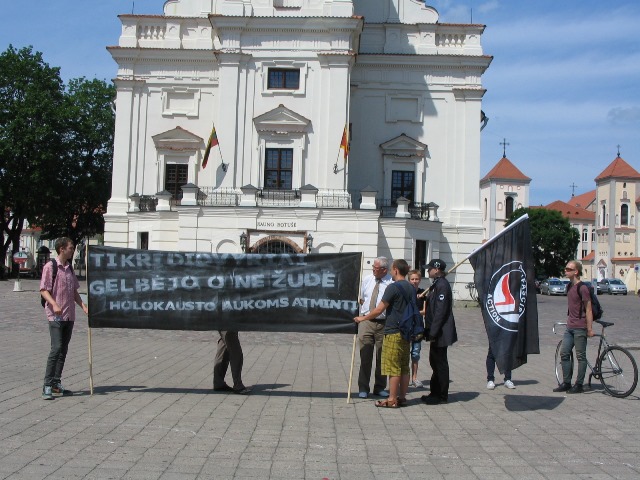 Three people opposed to the event came to Kaunas Town Hall square. The first of the three, a member of the ultranationalist organization “Lithuanian Union of Nationalist Youth,” Juozikijus Vayšvilkas came up to the group, but no one shook his provocatively outstretched hand. While the demonstrators were in the square, J. Vayšvilkas took pictures of them. The intention was obviously not to be able to give these photos as gifts.

Kaunas residents walking about in the square slowed down for a few seconds to read the banner. Some of them stopped to talk to the marchers and ask them questions. Two of them joined the organizers.

The marchers walked along the square and then down the long Vilniaus Street​​, turning into Nepriklasomibės Street. 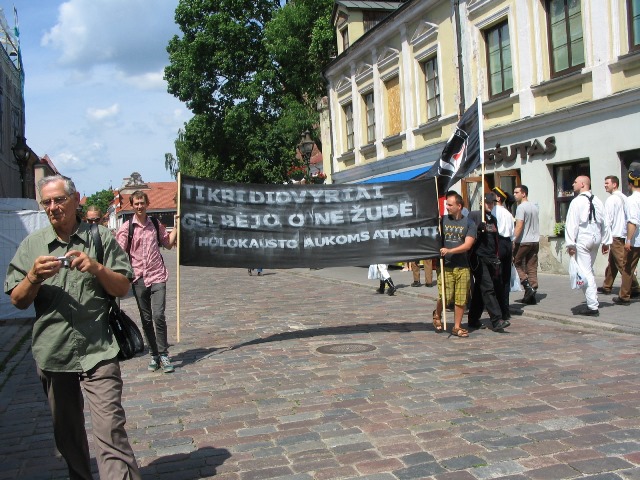 There were few passers-by on the streets. Just outside the outdoor  cafes and restaurants people were sitting at tables and looked with interest at the words on the banner and the Antifa flag.

The police showed keen interest in the march. They asked who had permitted it. Seeing that it was authorized beforehand, they did not hinder the demonstrators. 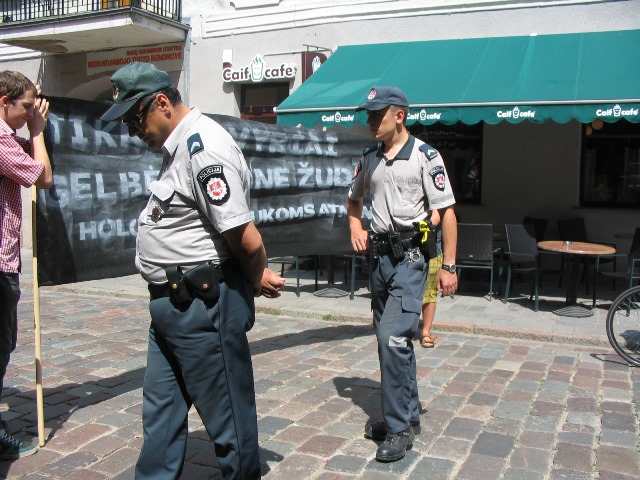 On the way, the procession was twice stopped by passers-by, in both cases married couples. The first were tourists from the United States. 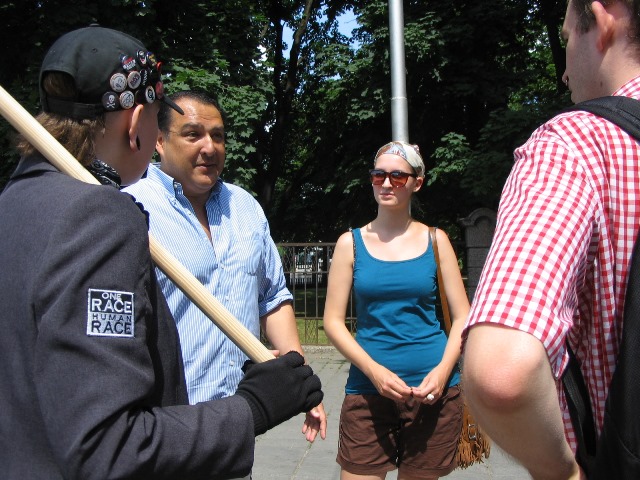 Asking the participants about the meaning of the march and having learned the translation of the Lithuanian words on the banner, they expressed their approval of the Antifa march, then told about themselves and why they had come to Kaunas. The second couple appeared to be native  Kaunas residents. They talked to the marchers about the necessity of such demonstrations and asked them detailed questions. The debate could have gone on and on, but Eva X, the organizer of the march skillfully brought it to an elegant conclusion.

The march ended at the site of the Lietukis garage, where, according to contemporary  testimonies, and an infamous photograph, one of the so-called “rebels” was killing Jewish civilians with a crowbar.

The crowd that had gathered applauded the killer. Testimony exists that when the last Jew was murdered, the killer walked atop the pile of corpses, and sang the Lithuanian national anthem accompanying himself on an accordion. The offices of Lithuanian prosecutors never managed to find out who the killers of innocent  civilians were. 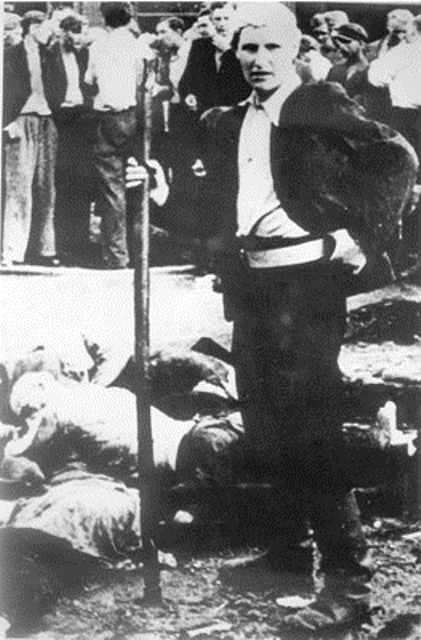 Two older people walked the entire way along with the young people from Antifa. One of them is the vice-chairman of a human rights organization called Lithuania Without Nazism. The second was the poet Aleksandras Bosas (Alexander Bos). He read some of his short poems written in Lithuanian, full of profound feelings for the Holocaust victims and scathing irony toward those who are trying to justify the killers today. 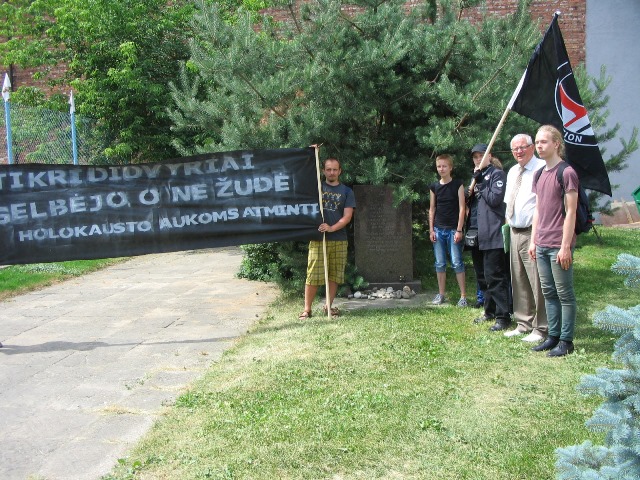 The 65th anniversary of the liquidation of the Minsk Ghetto was marked in Minsk on October 21, 2008. Speaking at the memorial known as “The Pit,”  the ambassador extraordinary and plenipotentiary of Germany to Belarus at that time, Gebhardt Weiss, said:

“It is not easy for me to speak to you at this memorial, not only as a representative of Germany, but also as a representative of the generation that asked our fathers, grandfathers, uncles and neighbors this main question for a long time and in vain, “Where were you back then?” and we did not receive any response for a very long time. There was more silence than answers. Only in the 1960s did we step-by-step begin to understand what happened.

“We must look straight into the particular face of this horror. They say those were the SS, Wehrmacht men, Gestapo, etc. But the harsh truth is different: those were our fathers, grandfathers, uncles and neighbors. We have to think about this if we remember. We must remember.”