Not surprisingly, quite a few Ukrainian Jews objected to the Petliura statue, especially as it was erected within a short distance of a still functioning Jewish synagogue. While it seems perfectly reasonable that many Jews might have an issue with a statue to Petliura, not everyone appreciated Ukrainian Jews’ expressing their objections.

In a Facebook rant, a regional leader of the extremist Svoboda party, whose leader was once photographed making the Nazi salute,  issued a bloodcurdling Facebook threat to Ukraine’s Jews, telling them to fall in line or face the consequences. Below is the Svoboda leader’s post in English translation with our comments, followed by a screen-shot of the original. Jewish activists plan to complain to the police, but given recent precedent it is considered doubtful that any serious action will be taken.

Translation of the Svoboda post with commentary added in square brackets [ ]:

“Again, these people are interfering with our country!!!  “Peacefully coexisted” — Is that when they organized the Holodomor?!!!  [the charge that “the Jews” caused the early 1930s Holodomor famine in Ukraine is a recurring antisemitic trope in Ukraine].  And now Israel won’t acknowledge the massive killing of Ukrainians [in the Holodomor] as genocide!???

“The only time we comfortably coexisted with kikes is in Kolivshina [an 18th century pogrom in which Ukrainians butchered Jews — he is saying that this massacre was the only time Ukrainians and Jews coexisted happily].

“I hope Ukrainians will remember who is in charge of their land, and put all minorities in their place!!!  Do not tell us how to live and to whom to put up monuments in our land. Do not tell us which language to speak and in which language to educate our children!!!  We are Ukrainians!  That’s all you need to know — you are guests.  If you want to live next to us, then get used to our rules; if not, go to your places [go to other nations], or else you’ll be punished.” 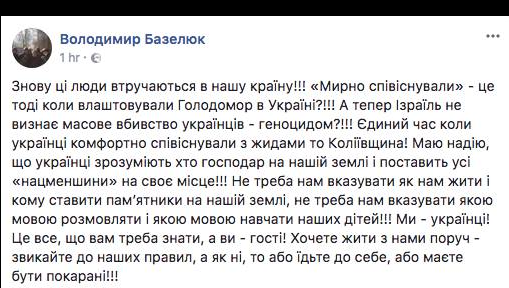