Instead of Removing Honors for Holocaust Collaborators, New Petition is Launched to Ask for Yet Another

In a 2012 article in Defending History, I asked why Holocaust perpetrator Jonas Noreika is made into a “national hero” here in Lithuania, one honored by street names and public plaques. Since then protests have come, among others, from a somewhat obscured  petition by Lithuanian intellectuals,  an appeal from journalist and Declaration of Independence signatory Rimvydas Valatka, Lithuania’s official Jewish community, Grant Gochin, a South African born author resident in the United States, and others. These appeals, all from 2015, were crowned by a rare protest by Jewish students at a Noreika shrine in central Vilnius (see Defending History’s guide for English readers to the links in the 2015 debate).

Testimonies document Noreika taking part in the massacre of the Jews of Plungė (Yiddish: Plungyán), as well as in “court proceedings” of the LAF (“Lithuanian Activist Front) fascists in Telšiai (Telz). There are decrees signed by him, as Šiauliai (Shavl) County Chief, to banish and isolate the Jews to the  Žagarė (Zháger) ghetto.

But at present, there are still streets named after him in the district of Pakruojis (Pokróy), Radviliškis (Radvíleshik), and Kaunas (Kovno). There are memorial plaques for him in Vilnius and Šiauliai. In the catal0gue of state-financed public-space honors he is referred to either as Jonas Noreika or as “General Vėtra” or both… 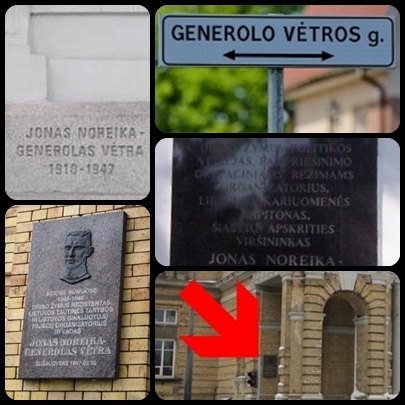 And now, in late 2017, instead of progress on the actual removal of street names and public plaques honoring the Holocaust perpetrator, we have seen a brand new petition to rename a high school in Siauliai as Jonas Noreika High School, one embraced by far-right websites such as Pro Patria. One critique of the planned renaming appeared in a Russian language publication, and another on the Facebook page of the Vilnius Jewish Community.

In the meantime, I wrote a letter to the Šiauliai City Council’s Deputy Mayor Domas Griškevičius on the petition that suggests changing the name of the high school to glorify Noreika. I received a rather calm response:

“I have seen the petition of that obscure citizen, and I have seen the corresponding article in a Russian news portal. The initiative will not be considered by the City Council, as it was published in a portal that does not meet the requirements of the Petitions’ Law. Of course, those citizens could arrange the formalities in due time. At the moment, there are no plans to change the historical name of the school. Many famous people graduated from the school and it is hard to choose now, as commemorating one means forgetting  others. To count only the signatories of the Independence Act of February 16, 1918, four of them were students in the school; by the way, we are planning to build a monument to them by the school, the procurement process is already over. I have serious doubts whether the name of Noreika is suitable to that school. Naming it after Noreika is not the only proposal, some want to see it named after the Sixteenth of February. We live in a free country. People  can propose various things.”

The petition on naming the school after the Sixteenth of February was initiated by an advisor to the Mayor, right after the initiative to name it after Noreika (which itself must have been unpleasant news to the City Council). One can read about the latter initiative here.

I was unable to reach the author of the petition on naming the school after Noreika. However, Mindaugas Stakutis, the author, has expressed his views quite openly on his Facebook page. His status update is exceptional in its simplicity:

“[…] How I discovered Jonas Noreika: It happened last year, when I was looking for historical places for my journey, when I was planning to travel in Pakruojis District to visit windmills […] I started researching Jonas Noreika. Later on, I bought a book about him […] A little while ago, I came up with the idea to rename the Šiauliai Julius Janonis Gymnasium after Noreika. Why? Well, because Noreika was accepted into the Šiauliai Gymnasium in 1921 and graduated from it in 1929.”

It is only human to find a pebble left by someone by accident or with evil intent, to read one or two one-sided books, and to decide that the name is suitable for a school that is over 150 years old and has seen many famous people graduating from it. We need to be glad that there are not that many people who make decisions based on such shallow researches, as, in thirteen days, the petition was signed by only 114 internet people, including six (!) from Šiauliai. It seems like such a superficial ruse will not prevail. However, the very fact that initiatives like this one arise is worrying. And they should mobilize those who are trying to remove the name of an unworthy person from public spaces.

As Vilnius Jewish Community chairman Simon Gurevich (Simonas Gurevičius) has put it on the community’s Facebook page on 22 October:

“Naming one of the schools in Šiauliai after Jonas Noreika would undoubtedly harm the city. This person signed decrees that enabled persecution of Lithuanian citizens. I think this fact is enough to say that he is not worthy of having a school named after him. Jonas Noreika’s collaboration with the Nazis is directly proven by an August 22, 1941, document, signed by him, according to which, the Jews of Šiauliai County were to be removed to ghettos and their property expropriated. He was an active participant in organizing the slaughter of Plungė Jews. Whatever the merits of this person, naming a school after him and honoring him would be simply immoral.”

“A school, named after Jonas Noreika, would provide an opportunity for the enemies of our state to negate the immense work done to restore historical justice. We have to see our history as it was. Why are we looking for heroes among the unworthy and forget the real heroes? Šiauliai has more than a few saviors of Jews, who risked their lives to save people. Why are no schools named after them? We are following the path of mature and open society based on humanist values, so let us not go astray. I hope the day when both society and courts will come up with verdicts for the crimes committed by some actors of the 1941 Hitlerist Provisional Government, as well as the activity of the Provisional Government per se; there is no legal limitation for these crimes, and there can be none; when that moment comes, we will be able to pride ourselves of our mature society that is not afraid of the shadows of its own past.”

Let us together hope that this saga will end up adding to the efforts to clean up the public spaces of Vilnius, Kaunas, Šiauliai, Pakruojis District, and Radviliškis from the macabre enterprise of glorifying Hitlerist collaborators and Holocaust perpetrators.