The Baltic Times, in the spirit of its increasing pattern of delivering up far-right views dressed up as impartial news coverage, did it again today. The front page banner headline reads ‘Riga Council in Civil Rights Attack’ with the caption to the large front page photo that condemns the city council for trying to block ‘war veterans and others’, as the anonymous authors put it (the article is signed by ‘Staff and wire reports, Riga), from being able to ‘exercise their rights in commemorating wartime duties and efforts’.

There was no mention that these are Waffen SS veterans and that the annual ceremony in the capital’s center is an affront to free Europe and Holocaust victims and survivors.

That an allegedly impartial newspaper would regard a noble attempt to legally block a  pro-Nazi march, on the part of elected officials in a European Union country, as a ‘civil rights attack’ in a news headline is shocking. PDF of the article here. 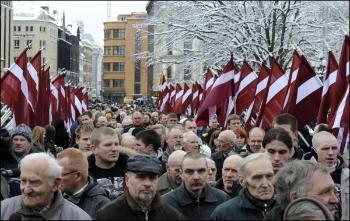 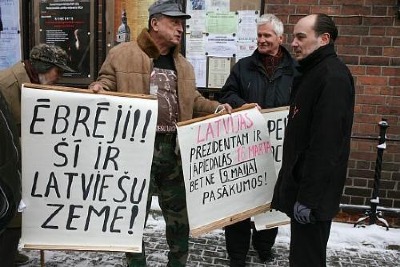 Posted on 1 July 2010 by Defending History

The organization Latvian National Front has sent to the email address of the Embassy of the USA, as well as other embassies, including the Embassy of Israel, a letter with the following content (translated from Latvian):

Posted on 1 March 2011 by Defending History

Increased Turnout for This Year’s Waffen-SS March in Riga

Posted in Boxes, Celebrations of Fascism, Neo-Nazi & Fascist Marches, Riga's Waffen SS Marches | Comments Off on Latvia (back in 2011): 2,500 Turn Out to Hail Country’s Waffen-SS

A wreath for Holocaust survivors was covered by the Waffen SS logo by the event’s organizers. Two anti-Nazi activists exposed the wreath again for a short time, before they were removed by police.

Posted on 1 January 2012 by Defending History

“As long as I am prime minister of this great nation, there will be no neo-Nazi marches, no parades or events glorifying Nazi collaborators, no racist marches offensive to any citizens of our country of whatever background or belief, in the center of our cherished capital city, least of all on our national independence day or other holidays, when we celebrate independence, freedom, equality of all people, respect between all our communities, democracy and hope for our future. I will not stand idly by as our country’s proud name is defamed in the four corners of the earth by those who espouse fascism, racism, antisemitism, xenophobia, homophobia and other forms of hatred. Period.”

Some of the shameful city center pro-Nazi events that went ahead in 2011 in Baltic capitals with legal permits (and support of some political elites):

Posted in Estonia, News & Views, Riga's Waffen SS Marches | Comments Off on 2012 New Year’s Resolution for the Prime Ministers of the Baltic States

Posted on 21 February 2012 by Defending History

The Council of Europe’s Commission against Racism and Intolerance today published online its 9 December report ECRI Report on Latvia (fourth monitoring cycle). In the 67 page report, the ECRI (European Commission against Racism and Intolerance) explicitly condemns the Waffen SS marches enabled and supported for many years by some of the highest echelons of Latvian government and society. There is also reference to the more recent case of celebrating the day of Hitler’s invasion in 1941.

In an escalation of high level pro-Nazi rhetoric in Riga, the nation’s president, Andris Bērziņš, said today that the international community needs to have it explained.

Have what explained? Why those who served in Nazi Germany’s Latvian Waffen SS divisions are honored in the country’s capital on March 16th each year.

The president of Latvia went on to say that “It’s crazy to think they’re war criminals.”

Posted on 20 September 2012 by Defending History

To the President of the Republic of Latvia Mr. Berzins
Copy to: Minister for Environmental Protection and Regional Development Mr. Sprudzhs

Posted on 22 March 2013 by Defending History