Another ‘Fake Litvak Congress’? Litvaks of Lithuania are Excluded on Orders of Election-coup ‘Pylimo 4 Bosses’; Photo-op Foreigners In Town for Gov. Hosted Event

Most Lithuanian government officials in diverse branches of its democratic government, including so many in its Culture and Education ministries, its local museums and libraries, its schools and cultural centers, have a warm and healthy attitude toward both the historic weight and tragic fate of the nation’s Jewish minority. This is important to keep in mind as we come yet again to provide a voice for the voiceless: the manipulation of the fragile Litvak and Yiddish culture, of the last survivors and their families, and of Holocaust history by some small and lavishly financed “Jewish fix-it units” including the Genocide Center, Genocide Museum, Red-Brown Commission, and a scattering of “Jewish, Yiddish and Litvak” centers in central Vilnius, a good part of which exclude from all professional participation people — including top specialists in the relevant field — who dare disagree with state revisionism on the Holocaust. In some cases, this policy brings about the succeeding phase of “Jewish” addresses without a single Jewish member of staff (think African American Cultural Center in Alabama, staffed by pure lily-whites who won’t mess up and peradventure say something contrary to local “patriotic” history-book narratives demanded by nationalists). 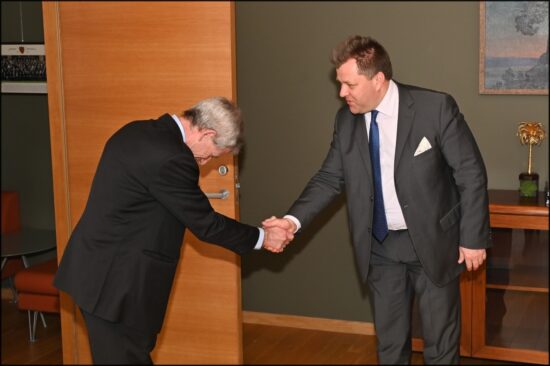 ♦ To the outgoing Israeli ambassador, HE Amir Maimon, after he posed with a portrait of an alleged Nazi collaborator Adolfas Ramanauskas (Vanagas) in support of the collaborator’s glorification. Defending History’s Evaldas Balčiūnas has reported for years on the collaborator, who is also featured on the front banner of neo-Nazi torchlit parades. The Wiesenthal Center had spoken out in good time.

♦ To the “fudged election” government-backed head of the state-supported Jewish community, eminent attorney Faina Kukliansky, after she granted “legitimacy” to the erection of a statue in Chicago to the same alleged Nazi collaborator, the first on American soil. The same monument was soundly rejected a year earlier by the democratically elected town council of New Britain, Connecticut. Head of the Jewish Agency now calling for monument’s urgent removal.

♦ To the current head of New York’s Yivo, Dr. Jonathan Brent, after a decade of intimate collusion in Holocaust obfuscation, glib betrayal of Holocaust victims and survivors and defamation of Yiddish scholars who disagree with far-right instrumentalization of this fragile language and literature and are loyal to the survivors and their families. See the plea by Vilnius’s last Vilna-born survivor, Prof. Pinchos Fridberg.

Posted on 12 October 2010 by Defending History

Readers recall that the Lithuanian parliament’s 21 September proclamation of 2011 as the ‘Year of Remembrance for the Victims of the Holocaust in Lithuania’ (text here) was mysteriously reincarnated one week later, on 28 September, as the ‘Year of Commemoration of the Defense of Freedom and of Great Losses’ (text here) with accompanying press explanations restricting the 1941 aspect to Soviet deportations to Siberia and no mention of the Holocaust among the ‘great losses’ (text here).

The text and press releases gave rise to fears that plans were still underway to sanitize, revise and glorify the memory of the 1941 LAF and Provisional Government collaborators of the Nazis. This painful subject was dealt with in a recent statement from the Jewish Community of Lithuania.

The ensuing History Apartheid, as this journal called it (2011 dedicated to one thing for foreigners and Jews and another for the country itself, in effect)  led to a letter to the chair of the Seimas from the head of Lithuania’s tiny but proud Jewish community (text here).

A check today of the official website of Lithuanian parliament (the Seimas) added a further curious aspect to the parliamentarians’ thinking. The English version of the website explains that 2011 has been proclaimed as the ‘Year of Remembrance for the Victims of the Holocaust in Lithuania’. 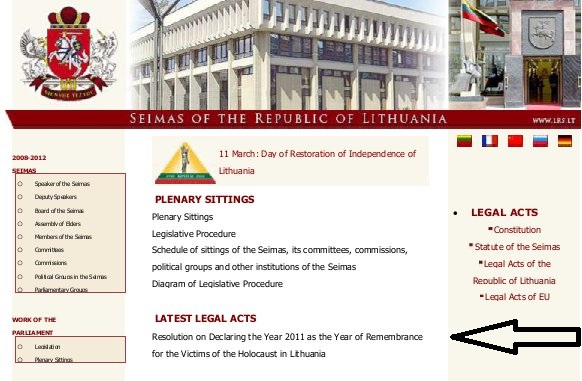 The corresponding sentence on the home page of the Lithuanian version of the official Seimas website indicates however that 2011 is the designated ‘Year of Commemoration of the Defense of Freedom and of Great Losses’.

One Western diplomat who requested anonymity commented to this journal: ‘You see, if you live long enough, you live to see everything’.

Posted on 7 November 2009 by Defending History

The Lithuanian parliament (Seimas)will host a reception on 12 November  in honor of the appearance of the English translation of the book of memoirs by Juozas Lukša-Daumantas, a postwar hero of the ‘Forest Brothers’ resistance movement against Soviet occupation. There is lively argument among scholars about whether Lukša is or is not the person on an infamous photograph of LAF butchers at the Lietukis Garage. But there is no dispute that he was an active member of the LAF and that he never expressed a word of regret about the LAF’s principal ‘accomplishment’: premeditated announcement, launch and intense participation in the actual butchery of Lithuanian Jewry.

The diplomatic corps in Vilnius was invited to the 12 November reception (invitation here). The ambassadors of France, Germany, Ireland, Norway, and others informed Defending History that they would not attend.