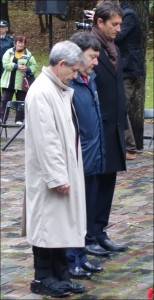 My mother Chana graduated from the Vilna Yiddish Reál-gimnàzye. Her literature teacher was [the famous Yiddish poet] Moyshe Kulbak. My father Shaye was a teacher in a Yiddish school and was connected to the Yivo here in Vilna. In our home only Yiddish was spoken. If it is of interest to you, please read my article about the Vilna Yiddish Reál-gimnàzye, where I include some unique images of documents, including some showing that in the worst times of Stalin, my father would always list Yiddish as his mother tongue in official documents.

Why am I telling you all this? Because I would wish you to understand, truly, that I have a moral right to share my thoughts with you.

Yivo is an academic institute dedicated to the Yiddish language and its literature and culture. In my opinion, it should not be mixed up with politics. I would therefore wish to ask you, why you agreed to join a political commission of the Lithuanian government [i.e. the International Commission for the Evaluation of the Crimes of the Nazi and Soviet Occupational Regimes in Lithuania]. Are you lacking in honors?

It seems to me you need to truly comprehend with whom you are dealing here. So I shall share just a few things.

My wife Anita spent nearly the entire war incarcerated in the Kovno Ghetto. Her registry number was 4426. That is also the ghetto where the mother of Emanuelis Zingeris was to be found. Wherever it is in place and it is not in place he tells about it and begins to weep. But in 2012 the Lithuanian government repatriated from America with colossal pomp, for reburial with full honors, the remains of Juozas Ambrazevičius-Brazaitis [the Nazi-puppet prime minister in Kaunas in 1941] who confirmed in writing with his own signature the [Nazi] order that all Jews of Kaunas must relocate to the ghetto. Before that he signed the order for a group of Jews to be sent to the Seventh Fort [near Kaunas] where they were brutally murdered.

Do you know how your acquaintance, the politician Mr. Zingeris reacted? No? I will tell you. He maintained a perfect silence vis-à-vis the constituency of Lithuanian citizens whose representative he is in the Lithuanian parliament [Seimas]. Not one critical word did he utter here in Lithuania. I published a comment about that in the magazine Tablet. Moreover, you must know that Emanuelis Zingeris was the only Jew in the European Union to sign the Prague Declaration (in 2008), which is the central document of the movement to falsify the history [of the Holocaust] by means of the theory of “Double Genocide.”

And now a few words about Ronaldas Račinskas. In November of 2012 a European forum on the announced topic “United Europe — United History” was held in Vilnius. From the podium of the Forum, one of the leaders of the Commission told an unheard-of tale about four people in Telz [Telšiai] who with a shovel dug a large pit in which for three years they hid forty-four Jews. Forty-four! And when I published an article simply correcting the facts, Mr. Račinskas sent far and side a letter in which he personally smears me from top to bottom. (By the way, I have posted the entire lecture at that Forum [English translation here], together with my own reply in Yiddish). To this very day, the website of the Commission posts personal insults about me, the Commission in which the director of Yivo is a member…

In my opinion the director of Yivo should not be a member of such a commission and for the honor of Yivo it would be important to resign from it as soon as possible. Otherwise the impression is given that Yivo is legitimizing everything that the Commission does, including its political work in support of the Prague Declaration and Double Genocide, and the whole politics of Zingeris and Račinskas, that causes so much pain to me, my wife, and all of our friends who are similarly among the remaining Jews here. As well as injury to the historic truth.

Be well and strong.

I joined the Commission, because I wish to help establish a foundation of historical truth regarding the terrible period of the Holocaust in Lithuania, which will help lead to discussions about the relations between Jews and Lithuanians; and because it seemed to me, that this Historical Commission is the most suitable way of doing this. I would not have done this without the participation of prominent historians and community leaders from Yad Vashem, the U.S. Holocaust Museum, the American Jewish Committee, whose presence bears witness to the importance of the Commission’s work for Jewish society.

I propose that you send your worries to all the members of the Commission, so that they can be discussed, and a conclusion reached about the veracity of the Commission’s work and the manner in which its deliberations are conducted. I would be prepared to help carry through this discussion.