Some Family Relics of Jewish Vilna

Posted on 15 January 2015 by Defending History

Coming across the Jewish Life in Poland section of Yivo’s website, I decided to write this short memoir. This photograph shows the teachers and graduates of the Vilner Yiddish Real-Gymnasium (Vílner yídishe reál-gimnázye) in 1930. The school’s principal was Leyb Turbowich, and the literature teacher (until his migration to Minsk in 1928) was the great Jewish poet Moyshe Kulbak, the author of  a well-known Yiddish poem Vílne, among many others. 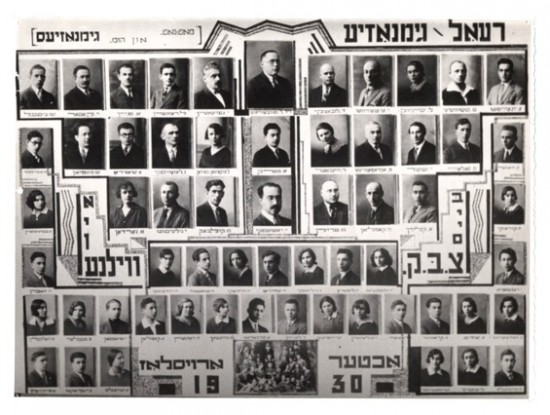 Here is the image of my mother’s diploma certificate, with her maiden name (Kháne Zlatkóvitsh). 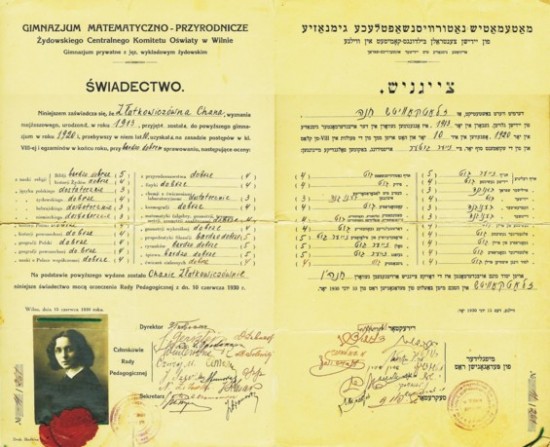 Versions of the image of my mother at the time, with and without the red diploma wax seal: 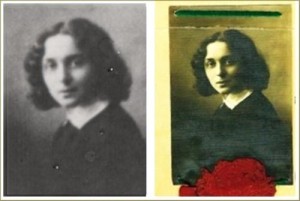 This next image is of the form filled out by my father, Schaje Friedberg, blessed be his memory. Dated January 12, 1954 (i.e., one year after Stalin’s death) it was submitted to get a work clearance. The applicant’s native language indicated on the form is:  Yiddish. Moreover, as journalist Vladimir Vachman commented (see August 29th comments to my note), indicating Yiddish as one’s native language “was a very brave step for the time, even after Stalin’s death.” 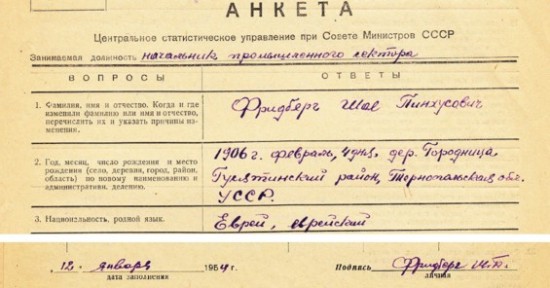 Vachman’s comments led me to study our family archives more scrupulously. Here are the fragments of two additional forms that I found, both filled out by my father. The first one, filled out in March, 1950 (at the height of Stalinism in the USSR) indicates that his native language is Yiddish. But I was most impressed by the second form, the “Personnel Department Application” which my father filled out while applying for his job. In December, 1948 (the year when Solomon Michoels was assassinated and when Stalin’s campaign against “rootless cosmopolitans” began), my father indicated that, besides Yiddish, he has a good command of Hebrew.

A fragment of the application form: 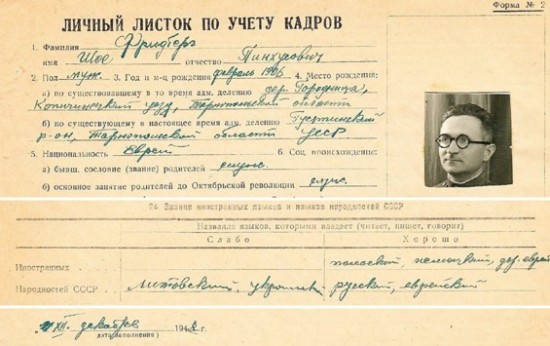 Original of this memoir (in Russian)