Leading Lithuanian Daily Finally Exposes Genocide Center ‘Chief Specialist’ who is a Neo-Nazi Leader; He tells the paper: ‘There was no Holocaust!’

Posted on 9 August 2011 by Defending History

Lithuania’s major daily newspaper, Lietuvos rytas — Lrytas.lt — made some local journalistic history today with an extensive article by Dovilė Tuskenytė on the dangerous mainstreaming of neo-Nazism in the country that succeeded in its principal interview in eliciting the unvarnished tone of the movement. The article’s title in translation: ‘Lithuanian Neo-Nazis, who use paganism for cover, work in state institutions and claim the swastika is only a historical symbol’. There was general agreement in the human rights community that the article represented an important advance and that its author is to be congratulated. An English translation is available here.

The article is accompanied by a series of 23 photographs making very clear the nature of ‘national patriots’ involved in neo-Nazi activity, as well as the intent of the ‘recycled pagan symbols’ used nowadays by neo-Nazi groups. It follows the recent Delfi.lt article exposing government financial support for such groups.

Ms. Tuskenytė’s article contains an interview with the state-sponsored Genocide Center’s Ričardas Čekutis, who continues to be listed as a ‘chief specialist’ by the Center, some five months after serving as one of the organizers and leaders of a neo-Nazi march through the center of the nation’s capital, Vilnius on 11 March. His statements to Ms. Tuskenytė include the following:

“Čekutis says that the world visions of the EU and Adolf Hitler are identical. Čekutis agrees with neo-Nazis on another issue: that there was no Holocaust. The Lithuanian Nationalist Center chairman says that the victims from all countries in World War II need to be counted, and that most of them lost the same amount of people as the Jews who were murdered. He also explains that the figure of victims in the millions is nothing more than a myth created for contemporary Jews to receive different kinds of compensation from different countries.” 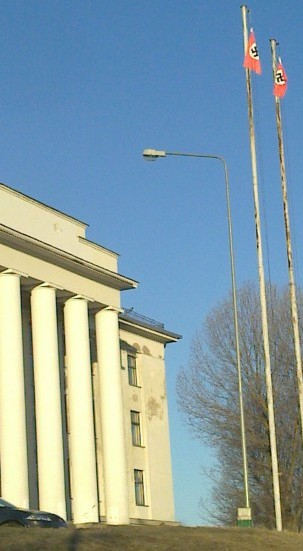