Posted on 27 April 2011 by Defending History


Ričardas Čekutis, the Chief Public Relations Specialist at the state-funded Genocide Research Center who was a leader of the March 11th 2011 neo-Nazi march on the main boulevard of the Lithuanian capital, and was formerly a top parliamentary aide to a Liberal (!) MP, gave a further ‘charming interview’ on April 24th  to Diena.lt.

The Genocide Research Center ‘public relations specialist’ who has publicly defended the neo-Nazi march on the capital city’s main boulevard last month, told the Diena.lt reporter: ‘I think the Jews themselves organize all these provocations. The Lithuanian Polish Electoral Action [Party], who despise other nationalities, should also be outlawed.’ By ‘provocations’, he was referring to the recent spate of neo-Nazi outrages in Lithuania, including the hoisting of Hitler’s flag high above Vilnius’s city center and the placing of the sign ‘Hitler was right. Juden raus’ by the gate of the synagogue in Kaunas (see on page 1). The Lithuanian mass media has been headlining the ‘theory’ that these acts were actually orchestrated by the country’s tiny Jewish community (Delfi.lt, Kauno diena, Respublika, etc). 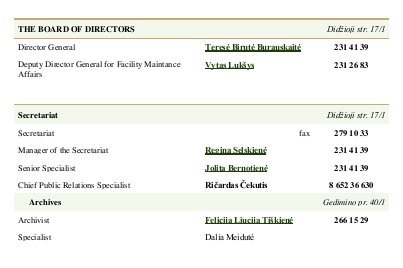 He also called Jews liars who, he said, are constantly squabbling and bickering among themselves, make a business out of the Holocaust and are always wailing how they are the targets of complaints. He called these actions by Jews “playing with matches on top of a barrel of gunpowder.The nerves of the citizens might not hold up, and then blood will be spilled. After that it will be hard to stop. It’s just a matter of the formation of a critical mass. If the government doesn’t do something, the citizens will.”

The text of the Diena.lt article is here.  English translation is available here.

Moreover, one of Lithuania’s main anti-fascist sites, Antifa—Lietuva, reproduces a photograph of Mr Čekutis with a megaphone at the March 11th neo-Nazi march, and produces from his Facebook materials an image of a battalion of Holocaust-era perpetrators in Lithuania, with the caption: ‘They fought for us’. Numerous racist comments and remarks glorifying the Third Reich are cited. The screen-captures include a war-time list of what Mr Čekutis calls ‘retards and traitors’, apparently a list of people to be executed.  In comments to fellow neo-Nazis, he calls for checking the genealogy of ‘political party’ candidates back to three generations. In another set of comments, Cekutis coins a neo-Nazi neologism from the current Lithuanian word for media, žiniasklaida: he replaces the žinia- (news) with žyda- (Jews) to form žydasklaida. He comments to the effect that Jews control the Lithuanian media.

The Genocide Research Center has oversight over the state-funded Genocide Museum in central Vilnius.

Mr Čekutis was cited in a 15 March 2011 report by the Society for the Promotion of the European Human Rights Model as an example of neo-Nazi infiltration into Lithuanian state bodies (French text here).

The Genocide Research Center, whose public displays in its street-front windows in the Old Town city center make no mention of its building’s history during the Holocaust (see here), is also an official partner of the ‘International Commission for the Evaluation of the Crimes of the Nazi and Soviet Occupation Regimes in Lithuania’ (informally the ‘red-brown commission’), whose political work supports red-brown equality resolutions in Europe (examples cited here).

Unaware of realities on the ground and with no ill intent, the United States Embassy in Vilnius and the U.S. Holocaust Memorial Museum naively participated in a December 2010 ‘closed conference’ that included participation of the Genocide Center (comment here), which for its own part, continues to proudly list Ričardas Čekutis on its website as ‘Chief Public Relations Specialist’. Each time that a foreign entity or scholar lends legitimacy to the academic component, the antisemitic sentiments of the political and societal components are likewise legitimized. Concerned scholars in the field of Holocaust Studies increasingly express the view that caution is in order.