◊
Saturday February 16, 2019 will celebrated as Independence Day in Lithuania (marking the 1918 rise of the state; a second independence day, March 11th, marks its 1990 reestablishment). The far-right-nationalists of Lithuania have once again been permitted to march through the central Old Town streets of the country’s capital to praise their so-called heroes. These views on “heroes” held by the Vilnius marchers are pretty much shared by much of the present and past government establishments, as evidenced, for example, by street names and  public plaques and many episodes of glorification of collaborators, including the infamous 2012 reburial with full honors of the 1941 Nazi puppet prime minister.

Posted on 9 March 2015 by Defending History

REYKJAVIK—Dr. Vilhjálmur Örn Vilhjálmsson, an historian, archaeologist and human rights specialist in Iceland and Denmark, who has in recent years contributed to Defending History, today released to the media his letter to the Human Rights Monitoring Institute asking if the HRMI will again this week maintain its perennial silence about the capital’s annual neo-Nazi marches on the March 11th independence day. The municipality of Vilnius, Lithuania’s capital, has been granting the city center on independence day to neo-Nazis and other far-right extremists who have since 2008 been chanting each year exclusivist and exclusionary slogans as well as sporting racist and Nazi signs and symbols. In recent years, they have also featured huge banners honoring a local 1941 Nazi collaborator in the Holocaust who was in 2012 reburied with full honors by the state.

The neo-Nazi marches in central Vilnius on independence day got underway in 2008.

Emanuelis Zingeris, Star of the Red-Brown Road Show, Turns Up in Reykjavík on the Jewish New Year 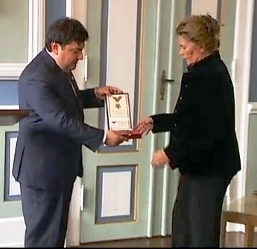 REYKAVÍK—On the first day of Rosh Hashona, the Jewish New Year (yesterday, 17 September 2012), Mr. Emanuelis Zingeris came to perform an official duty here in Iceland as chairman of the Lithuanian Parliament’s foreign affairs committee. He presented the Lithuanian Foreign Ministry’s Millennium Star to Steingrímur Hermannsson, a former prime minister of Iceland who passed away in 2010. Hermannsson‘s widow received the posthumous medal from Mr. Zingeris at a ceremony in the Icelandic Parliament, which was attended by an exceptionally small number of people.

Posted in Collaborators Glorified, Human Rights, News & Views, Opinion, Politics of Memory, Vilhjálmur Vilhjálmsson | Comments Off on “Take off your hat. This is not the synagogue.”