I had  first visited Lithuania in 2001, when I was a senior researcher at the Copenhagen based Danish Center for Holocaust and Genocide Studies. At the time I attended the opening of the Tolerance Center in the building of an old Vilna Yiddish theatre and other ceremonies. For instance, I dropped by a rather lavish reception at the French Embassy in Vilnius, with tables bending under the loads of canapés, hors d’oeuvres, champagne and cakes. The French Embassy, which officially joined in the commemoration, invited the official guests to enjoy such delicacies after attending the ceremonies in the Ponár (Paneriai) Forest honoring the memory of the 100,000 people who were murdered there during World War II.

My third visit to Lithuania in 2006 was to commemorate a most intriguing personage, Aage Meyer Benedictsen (1866-1927). He was a Danish ethnographer and globetrotter of Icelandic and Jewish descent, a true philanthropist, humanist and the first Danish spokesperson for minorities and suppressed people. In 1895 Meyer Benedictsen published a book on Lithuania, which was later translated into English in 1925, entitled Lithuania; The Awakening of a Nation. Much later, in 1997, the book was translated into Lithuanian. A small group of mostly elderly academics, who are interested in Danish and Nordic cultural exchange as well as in Aage Meyer Benedictsen’s work, try to keep up some activities in his name, acknowledging him historically speaking as one of the greatest foreign friends of Lithuania. Their aim is to introduce this interesting man to the Lithuanian people.

This time around, I had been invited to Kaunas by the Friends of Aage Meyer Benedictsen to give a talk about the family of his Icelandic mother and his Jewish father.

Just recently, I had learned that another conference would be held in Kaunas on the very same day as the Meyer Benedictsen-conference.

That was the Ambrazevičius-Brazaitis conference.

By following the information on www.DefendingHistory.com, I saw that the conference had been relocated to Kaunas City Hall after the Rector and Vice-Rector of Vytautas Magnus University disallowed the conference on the premises of the university as originally announced. The conference I was invited to speak at started at 2 PM, so I decided to pay the Juozas Ambrazevičius-Brazaitis conference a short visit before noon.

Despite not having any knowledge of Lithuanian, I wanted to see how many people attended a glorification of a Nazi collaborator. 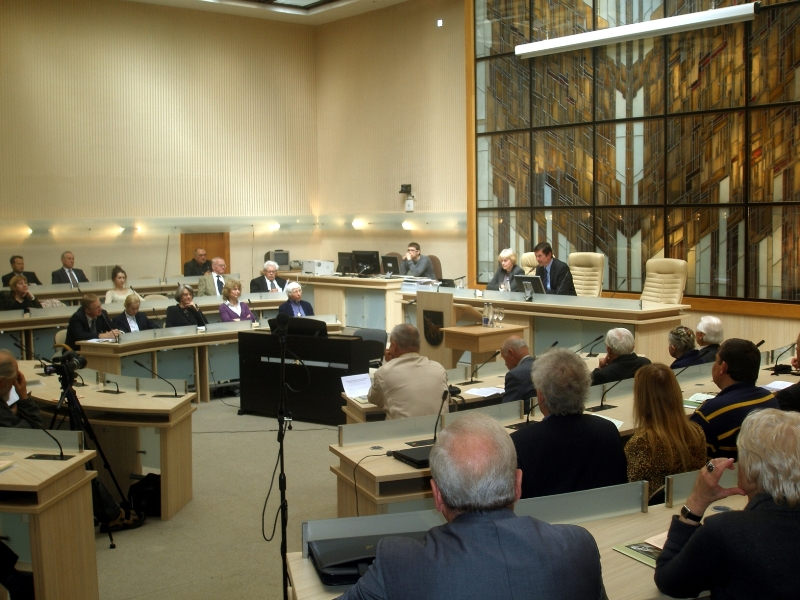 When I arrived at Kaunas City Hall, every seat in the room was occupied. I counted about 60-70 people there.

When I entered the hall, a Roman Catholic clergyman, possibly a bishop, was addressing the conference. I took some photographs of the first speakers and some of the participants. 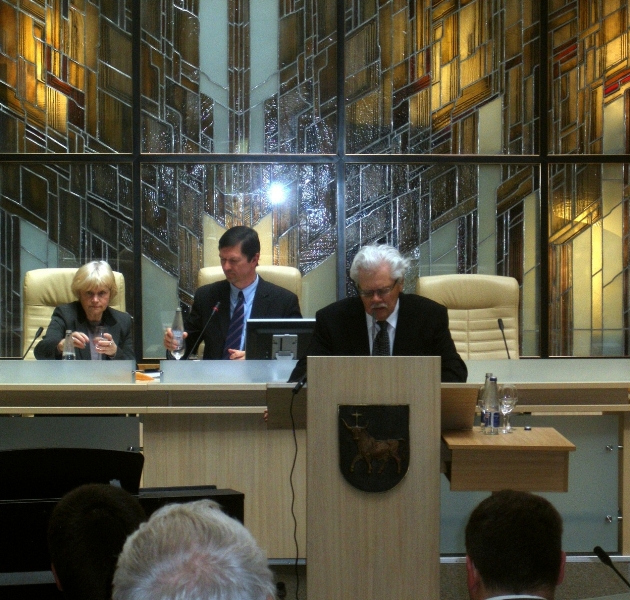 After about fifteen minutes, an elderly and robust gentleman on the left side of the hall all of a sudden stands up and walks toward the entrance and straight up to me. In a very intimidating way, raising his voice, he said something I didn’t hear, because people started applauding one of the speakers. I gave the elderly man a sign to come with me outside the entrance, where he repeated his message. I understood enough to realize that what he was shouting in my face included the word synagogue.  Nėra sinagoga, as I heard it. He was telling me that this is not a synagogue, and he simultaneously pointed with two fingers at my hat. According to bystanders who were kindly interpreting his instructions,  he was telling me that this was not a synagogue, and that I should take off my hat.

Then I asked the old man, whether he understood German or English, and in both languages I said “this is not a church, and hats are not forbidden in the EU.” A reporter and a cameraman from Lithuanian State Television were sitting outside the hall and I could see the cameraman turning on the camera so he might have shot footage of the incident. He and the reporter were apparently shocked by the conduct of the thuggish man.

I was also quite shocked, to say the least, and turned to a young guard in the entrance hall, and asked him whether hats were forbidden in the City Hall. I also asked him to phone the police because I felt quite intimidated by the conduct of the old man, who was getting more and more violent in his body language. The guard said he would call the police if the man continued, after which the old fellow walked back into the hall. He walked over to two other participants in the hall and whispered something into their ears and pointed at me, where I was standing at the rear of the hall.

Then a heavily built man stomped back to his seat and started photographing me.

After a further few minutes, I decided to get fresh air for a few minutes, and then again went back into the hall for further ten minutes.

When I finally left the City Hall of Kaunas, still in a state of shock, and with my adrenaline still pumping, it was difficult to enjoy the beautiful morning, the streets filled with happy people so very different from the grey eminences and hateful glances in the Kaunas City Hall.

I decided to walk over to the Kaunas synagogue, which is only around two hundred meters around the corner from City Hall. On my way there, the only thing I could think about was how a stylish Irish “newsboy” eight cornered tweed cap could create antisemitic sentiments in modern Lithuania. Were people stereotyped because of their appearance in this country? Was there a hat-Verbot in Lithuania? I must admit, I am a hat-person (i.e. I am bold), but I have never experienced anything like this, due to my hats or caps. But then again, where people gather to praise a man who signed laws which removed all the rights of Jews in Lithuania, one should probably not expect to meet normal people.

When I reached the synagogue, I met a group of French Jewish tourists, who had been visiting the synagogue. I told a few of them about my experience in the City Hall. They were shocked to hear about it. Then I spoke to the gabay of the synagogue and his young son in a mixture of Yiddish and English. When I told him about my experience, he said that he knew about the Ambrazevičius-Brazaitis conference, but underlined that the Jewish community was not engaging in politics. I fully respect his attitude. There are no more than 200 Jews living in Kaunas, and in a city where a quisling gets a saintly burial, with the participation of the mayor of the city and the funding of the Lithuanian State, I would not expect Jews to be comfortable in public debate or a protest. After a quick glance at the interior of the beautiful synagogue, I thanked the man and his son, both of whom had welcomed me so warmly.

Sunday morning May 20th was another beautiful and sunny day in Lithuania. Before I left Kaunas I called a taxi and went for a 45 minute sightseeing tour around the old city beginning the trip at the desolate and desecrated old Jewish cemetery. I had read the following in the latest issue of Kaunas in your Pocket: “The old Jewish cemetery to the north of Azuolyas, now a popular place for local drunk youths, comes complete with swastikas painted on the walls and a forlorn selection of broken gravestones.”

Kaunas in your Pocket  also informs the reader that the great-grandfather of Sasha Baron Cohen (Borat, Brüno, Ali G etc.) was born right here in Kóvne. I bet he went around wearing a hat. The ridiculous attitude of the present government in Lithuania to the country’s past is rather “Boratish.” How can the Lithuanian government justify a conference to commemorate a cosignatory of the laws for ghettos and concentration camps in Lithuania, a conference where thuggish old antisemitic people intimidate people wearing hats? Isn’t Lithuania a member of the EU? Are we back to the times of Nazi-puppet Juozas Ambrazevičius and his colleagues who annulled the ancient rights that Vytautas the Great gave to the Jews of Lithuania in the fourteenth century, and now these Nazi puppets were confirming  the German demands that all Jews should be forcibly moved into the ghetto in Viljampolė within four weeks…

My interest in Lithuania and the Lithuanian people has not changed because of a single man’s animosity toward me and my hat in Kaunas. I presume that people who gathered at the ceremonies glorifying the 1941 Nazi puppet “prime minister” in Kaunas is a very small minority of extremists, and that an even smaller faction of the extremists become aggressive when they see people with hats or who seem to remind them of all the victims they so want to forget. Such Lithuanians must face the fact that their country was a slaughterhouse, where close to a quarter million Jews from Lithuania and other countries were killed by the Germans occupiers along with their Lithuanian collaborators. Praising a person who helped facilitate or validate that carnage, is perverse.

The €8,700 which the Lithuanian government spent on the Ambrazevičius-Brazaitis glorification ceremonies would have been better spent on restoration or cleaning up of the rubbish at the old Jewish cemetery in Kaunas, or even supporting the activities of the Friends of Aage Meyer Benedictsen, a Dane of Jewish-Icelandic heritage whose main interest was for suppressed nations and minorities.

The conference at the City Hall of Kaunas on 19 May 2012 was an insult to millions of people as well as to human rights. The government of an EU state added insult to injury by promoting and financing such an event.

Dr. Vilhjálmur Örn Vilhjálmsson was born in Reykjavík, Iceland in 1960. He received a PhD in archaeology from the University of Aarhus (Denmark) in 1992. He has worked as an archaeologist and a curator at the National Museum of Iceland; senior researcher at the Danish Center for Holocaust and Genocide Studies; and editor of RAMBAM, the annual of the Society for Danish Jewish History (2008-2011).

He is the author of Medaljens Bagside (The other Side of the Coin, 2005), which concerns the unknown story of the “Stateless Jews” which the Danish authorities expelled to their deaths between 1940 and 1943. Dr. Vilhjálmsson is presently at work on a book based on the letters and diaries of Polish historian Dr. Stefan Gluecksman and his family in the Warsaw Ghetto. Gluecksman was expelled by the Danish authorities from Denmark in 1941 and perished in the Gross-Rosen Concentration Camp.