VMU in Kaunas Sinking Further into Ambrazevičius-Brazaitis Morass, as Historians Join Glorifiers for Yet Another Event


[Updates inserted in square brackets.] According to the website of Vytautas Magnus Univeristy, another event on Juozas Ambrazevičius-Brazaitis, the Nazi puppet “prime minister” of Lithuania who presided over the onset of the genocide of Lithuanian Jewry, will be held tomorrow, 24 May 2012, in the same VMU building (at Donelaičio Street 52) which is reputed to house both a lecture hall (room no. 608) and a bas-relief honoring the wartime fascist. Tomorrow’s event has also been announced on Bernardinai.lt. [Editor’s note of 24 May 2012: Shortly after the appearance of this article, the VMU website program was withdrawn; a screen shot appears below toward the end of this article.]

It is only a week since Vytautas Magnus University (VMU) withdrew from hosting a conference to honor the memory of the wartime collaborator in circumstances that have led to substantial confusion and conflict.

Of all the professors and leaders of VMU, only former professor and current MEP Leonidas Donskis issued an unambiguous protest on moral and ethical grounds, first published on 15 May in DefendingHistory.com. In the end, the 19 May 2012 conference was moved to Kaunas City Hall (eyewitness report).

An extract containing the signature of the "prime minister" and the item about setting up the ghetto: "By German order a ghetto for Jews will be established in Vilijampolė, to which all the Jews of the city of Kaunas must be moved within 4 weeks."

Ambrazevičius, who changed his name to Brazaitis after his stint as “prime minister” in the pro-Nazi “provisional government” of 1941, personally signed protocols confirming that “all means” be taken against Jews though avoiding “public executions” (27 June 1941); that a concentration camp for Jews be set up (30 June 1941); and that all of the Jews of Kaunas be herded into a ghetto within four weeks (7 July 1941 [English translation here]). It is thanks to major Lithuanian historians working in the modern period of free and independent Lithuania that these protocols have become widely known.

According to the program for tomorrow’s conference, which is an open discussion between participants with differing views (unlike last Saturday’s commemorative event), the leading glorifiers of the wartime fascist from Saturday’s conference will be there too.

The fact this is occurring with the participation of major academics and at a respectable university means that the “glorifiers” recycled from last Saturday’s conference, some say, are receiving the stamp of legitimacy from the participating historians and the imprimatur of the university per se, no matter what view the serious historians propound at the event itself. It is feared that it is another stepping stone on the road toward legitimization of the glorifiers, and by extension, the glorified.

The conference program includes no representative from the Jewish community. One observer asked: Would it be prudent, for example in North America, for a university conference on an issue of acute and painful concern to Native Americans, for there not to be at least one representative from the Native American community on the conference program? [Editor’s note of 24 May 2012: The published program, of which a screen shot appears below, did not include any Jewish community representatives but this was made good at the actual event by the inclusion of the Kaunas Jewish historian and roots guide Chaim Bargman whose appearance changed the entire event for the better.]

Moreover, this VMU conference is held at a juncture in history that verily represents the last moment when VMU could include a Holocaust survivor on the panel.

Of the historians in attendance, only one, US born political scientist Darius Udrys has published a morally unequivocal rejection of the entire charade, including the already unforgettable line:

“If there’s one thing civilized people should all be able to agree upon, one would think that it would be not to make heroes out of Nazi collaborators.”

By contrast, a major Kaunas professor long known for progressive and tolerant views, in an interview with Lietuvos rytas earlier this week, went the route of complaining about the Jews’ “simplistic” views of something that is really very “complicated,” invoking the usual lexicon of obfuscationism.

It is widely considered a further politicization of history in the slide toward sanitization, heroization and glorification of local Nazi collaborators because of whom Lithuania had the highest rate of murder in all Holocaust-era Europe, recently reconfirmed in David Bankier’s posthumously published Expulsion and Extermination: Holocaust Testimonials from Provincial Lithuania (Yad Vashem: Jerusalem 2011).

Speakers include the director of the Vilnius Yiddish [!] Institute, who is also the current dean of VMU’s Faculty of Diplomacy and Political Science. For lovers of Yiddish language, literature and culture internationally, it is a further rude shock in the recent legacy of  abuse of the tragic Yiddish culture of Eastern Europe. “Yiddishless Yiddish” has become a front, according to some observers, for ongoing government PR for naive foreigners for much of the year. Last year the same professor, who has yet to learn Yiddish, likened survivors’ views of the Holocaust to one of two “Talibans” in an interview with the Economist which declared him to be a “Yiddish studies professor.”

International protests against the honoring of a major Nazi collaborator have been issued publicly by the Jewish Community of Lithuania, B’nai B’rith, the Simon Wiesenthal Center, the International Christian Embassy Jerusalem and two members of the Lithuanian parliament, Vytenis Povilas Andriukaitis and Algirdas Sysas, one of whom, MP Andriukaitis, went on to challenge the foreign minister on the floor of the Lithuanian parliament on 17 May 2012.

One VMU student of philosophy, who asked not to be identified by name, told DefendingHistory today, speaking from Kaunas:

“That the title of tomorrow’s conference has only the family name of the postwar American academic Brazaitis, and not his earlier Nazi-collaborator-era original family name Ambrazevičius, really tells you everything. With ins-and-outs and ups-and-downs, foolish people very high up are working to make a big hero out of someone our country should be deeply ashamed of.” 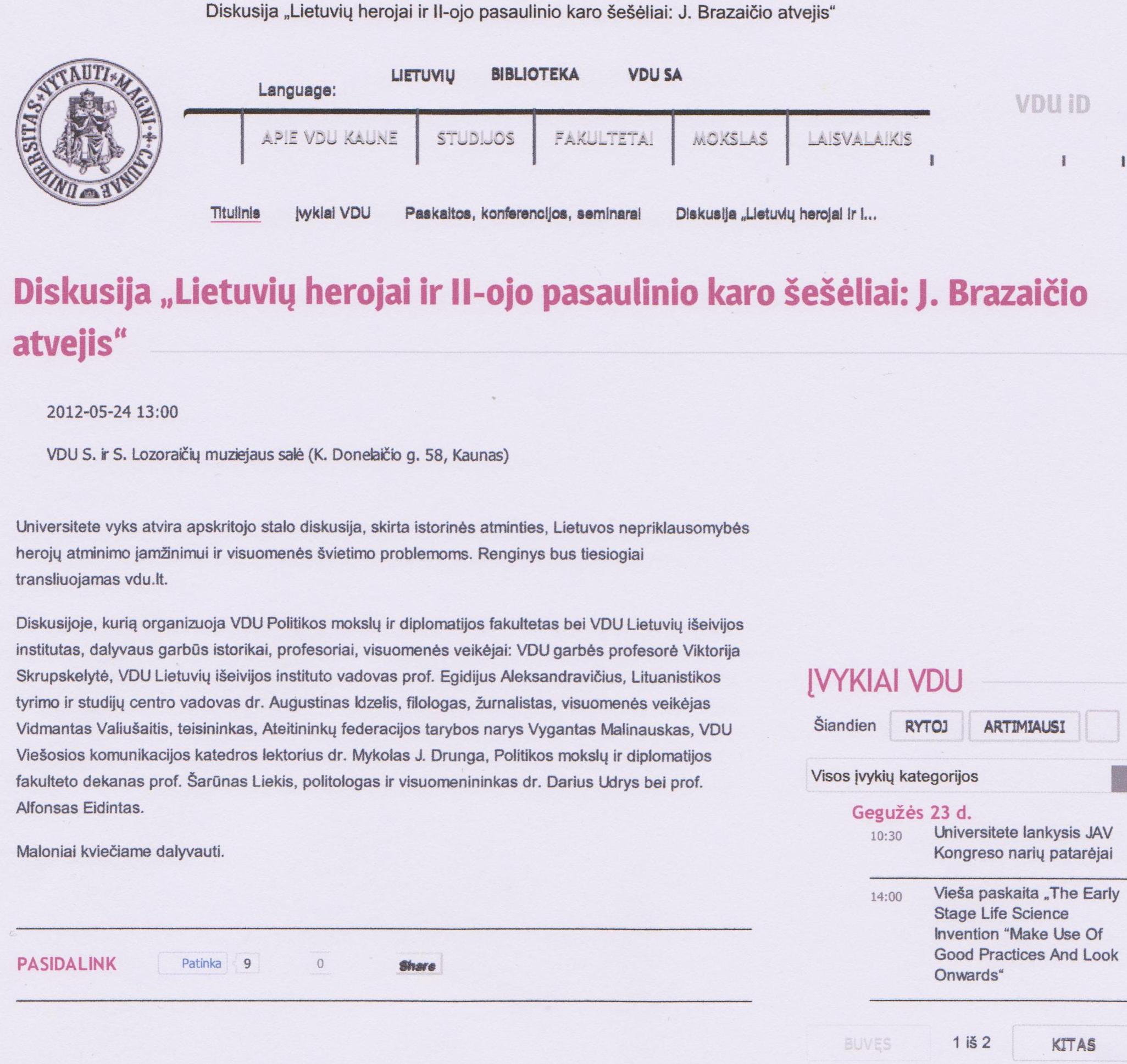 It was revealed last week that the prime minister and culture minister of the country personally signed off on the budget allocating 30,000 litas (around €8,700 / US $11,000) for the repatriation and honoring of Ambrazevičius-Brazaitis. It is not known if tomorrow’s Kaunas event is or is not part of the same budget.

DefendingHistory has editorialized as follows on the saga:

To this we might now add: bas-reliefs and VMU lecture halls too.

But at least the bas-relief, inaugurated in 2009 in the VMU building where tomorrow’s conference is scheduled, is honest enough to use the man’s original name: Ambrazevičius.