The following is a translation of the statement submitted to the Lithuanian parliament (the Seimas) on 17 May 2012 by MPs Vytenis Povilas Andriukaitis and Algirdas Sysas. The original is available here. 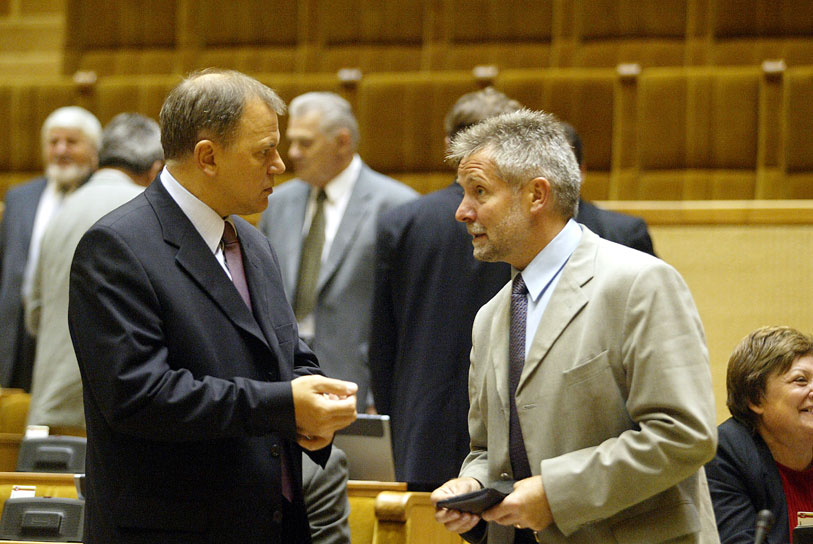 MPs Andriukaitis and Sysas in the Seimas (foreground). Photo courtesy Image Archive of the Seimas.

Several days ago we received an invitation to a ceremony for the reburial of the remains of Juozas Brazaitis Ambrazevičius (1903–1974) in the churchyard of the Kaunas Church of the Resurrection of Christ. A booklet was included with the invitation recounting the life and deeds of Juozas Brazaitis Ambrazevičius. It included his academic and pedagogical activity and his participation in the anti-Nazi and anti-Soviet resistance. It also presented an excerpt from a letter by Joshua Eilberg, chairman of the Immigration, Citizenship and International Law Sub-Committee of the Judiciary Committee of the US House of Representatives, saying that an investigation into the Juozas Brazaitis Ambrazevičius’s collaboration with the Nazis during World War II had been stopped.

The description of his activity as leader of the Provisional Government, however, appeared completely altered. Here there was a tendency observed to omit and distort the historical facts. The text claims the Provisional Government declared the restoration of the independent state of Lithuania, but doesn’t mention that in the very first declaration read by Leonas Prapuolenis over the Radiofonas radio station on 23 June 1941, on the restoration of the independent state of Lithuania, some of the country’s citizens became separated from the state being reborn. Jews are named specifically as traitors to Lithuania, and there is even a call to revoke the rights granted to the Jews by the decree of Vytautas the Great. The text of the booklet says the Provisional Government restored to its owners property nationalized by the Soviets. What it doesn’t say is that this restitution didn’t apply to property nationalized from Jews. On the contrary, the seizure of Jewish assets was left intact, and even expanded.

The booklet says “the Nazis didn’t succeed in legalizing their actions regarding the Jews through the ‘Lithuanian administration’.” Surviving Lithuanian Provisional Government documents, however, tell a different story. I will quote an extract from the minutes of the meeting of 27 June 1941: “Minister Žemkalnis reported on the extraordinarily brutal torture of Jews at the Lietūkis Garage in Kaunas. It is resolved: that despite all the measures which need to be taken against the Jews because of their Communist activities and harm done to the German military, the partisans and individual citizens, are to avoid public executions of Jews. It had been found  that these actions are being carried out by people who have nothing to do with Activist Headquarters, Partisan Headquarters or the Provisional Government.” As we see, there is not a word in these minutes indicating that the Provisional Government condemned the mass murder of innocent people, that they stood up to protect them, or that they called upon citizens of the Republic of Lithuania to defend civilians.

“to approve the establishment of the Jewish concentration camp and to place responsibility for its establishment with public works minister Švipa, in tandem with colonel Bobelis.”

In the record for 7 July there is the text:

“According to the statement by German general Stahlecker, the mass liquidation of the Jews will no longer be carried out. On German orders a ghetto is now being set up for Jews in Vilijampolė, to which all Jews of Kaunas must be moved within four weeks.”

One could also quote from the legislation called “Regulations on the Status of the Jews” of 1 August 1941, on the isolation of Jews and the confiscation of their property. The documents testify to clear collaboration by the Provisional Government with the Nazis. All of these records, minutes and protocols are signed by the temporary acting prime minister who is now being commemorated ― Juozas Ambrazevičius.

Should the Republic of Lithuania, as a member of NATO and the European Union that celebrates democracy, contribute as a state to the honoring of people whose biographies and the surviving relevant factual documents greatly complicate the status of the state of Lithuania?

Should the Lithuanian state really be financing events which are connected with the commemoration of controversial figures, and thus risk diminishing the authority of the state and society in the eyes of the international democratic community?

We understand very well that the roles of Knut Hamsun, Justas Paleckis and Marshall Philippe Pétain in their respective historical situations were tragic and that they chose this complicated path as puppets. Unfortunately, the Provisional Government was also a puppet, a government ruled by the Nazis, which assumed partial responsibility for what the Nazis did in Lithuania. There would have been a brighter page in the biography of J. Brazaitis (Ambrazevičius) if he had, as a participant in the anti-Nazi underground, saved Jewish families from Nazi persecution or murder. And many enlightened Lithuanians did do that, including Elena and Viktoras Kutorga, Jackus Sonda-Sondeckis, V. Landsbergis-Žemalnis, Steponas Kairys, and many other noble people. Sadly, we have no such facts about the life of J. Brazaitis (Ambrazevičius).

Antisemitic attitudes were characteristic of many Lithuanian intellectuals representing the LAF at that time. In this context, the memorandum by M. Krupavičius, K. Grinius and J. Aleksa concerning the mass murder of the Jews that was presented to the Nazi administration is all the more remarkable.

But the activity of the Provisional Government is not remarkable.

So it is worth asking openly today:

Should Lithuanian society, upholding democratic values, give honor in the name of the state to the head of a puppet government that served the Nazis, a government which remained deaf to the murder of its own citizens, which did nothing to save innocent people from extermination, which established a concentration camp and contributed to the setting up of a ghetto and the murder of civilians?

This entry was posted in Bold Citizens Speak Out, Collaborators Glorified, It Pays to Defend History: Success Over the Years..., Legacy of 23 June 1941, Lithuania, News & Views, Opinion, Politics of Memory, Vytenis Andriukaitis. Bookmark the permalink.
↑ Return to Top