In January 2014 the Prague-based EU-financed Platform of European Memory and Conscience suspended the membership of the Czech Institute for the Study of Totalitarian Regimes (ÚSTR). The fracas attracted press coverage through late February.

The reason given for the publicly divisive suspension was that the Institute was  “not willing to dispel a suspicion of violating the code of ethics of the Platform on two counts.” The president of the Platform, Göran Lindblad of Sweden, said: “It is painful to suspend the membership of one of the founding members of the Platform; however the Institute has been infiltrated by Communist collaborators, and it is therefore our duty to act firmly.”

The director of ÚSTR, whose personal financial affairs of the 1990s were also pulled into the discussion, fought back and on June 12-13 the Prague Institute and the Platform of European Memory and Conscience are holding a joint conference as if nothing had happened. Double Genocide is still the main issue and some member states of the Prague Platform are actively honoring Nazi collaborators and killers of Jews as national heroes, while the EU and the European Parliament pay for the show.

Exclusion from a European platform based on allegations about “Communist collaboration” in 2014 sound like something out of the McCarthy era or J. Edgar Hoover’s notes. But this is in fact the vocabulary of the organization which leads the way in systematic Holocaust obfuscation and Double Genocide propaganda in Europe today. Defending History has characterized it nicely:

Among the June 2014 Participants in Prague

Among the participants in the reunion of the Platform and the ÚSTR you find Tunne Kelam of Estonia.  Mr.  Kelam is a member of the European Parliament. On his web-page on the European Parliament’s site Mr. Kelam presents an overview over the history of the the Estonian people in the 20th century.   Although Estonian nationalists killed nearly 1000 Estonian Jews before the Nazis invaded the country in 1941, Mr. Kelam only has one sentence about the Estonian Jews in his historical account for the 20th century: “The 1941 deportees included about 10% of the Estonian Jewish community,” where Mr. Kelam refers to the Jews deported by the Soviets.

The European Parliament member deliberately leaves out the fact that more than 75% of Estonia’s Jewish community, aware of the fate that otherwise awaited them, managed to escape to the Soviet Union thanks to which they survived; virtually all the remainder (between 950 and 1000 men, women and children) had been killed by the end of 1941.

An appreciable number of the Forest Brothers reestablished the Estonian militia Omakaitse even before the invasion of the German Nazi forces. Of the Jews who remained in Estonia after the outbreak of war, fewer than a dozen are known to have survived. Together with Holocaust obfuscationist Tunne Kelam, University of Iceland Professor Hannes Hólmsteinn Gissurarson is featured at the conference in Prague. Professor Gissurarson, who is not known for Holocaust Obfuscation, would do Mr. Kelam a favor by telling him about Estonian Nazi collaborators like Evald Mikson, who later became an Icelandic national Eðvald Hinriksson. Mikson was a central figure in the annihilation of the remaining Jewish population in Estonia in 1941.

The Simon Wiesenthal Center’s Israel office director Efraim Zuroff fought a fierce battle to get Mikson’s case investigated. Mikson, however, died before any important legal measures were taken against him by the Icelandic or Estonian governments, who worked closely to delay judicial measures against him until it was too late. 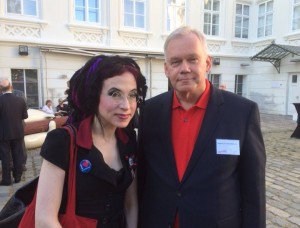 Among the participants in Prague were Professor Gissurarson of Iceland and Finish author Sofi Oksanen. She  gave the key-note speech on 13 June. Oksanen has been quite active in historical distortion in her novels, as pointed out by Finish journalist Leena Hietanen. On his Facebook page, Professor Gissurson comments on the photograph and tells us about some colorful exchange of views between him and Sofi Oksanen:

She: “Our colours match.”

I: “Red is far too good a color to hand over to the left.”

Seeing this nice double portrait, I am inclined to believe that Oksanen was actually referring to their pale complexion rather than the color red. We have come to the point where Double Genocide politics makes for literary sensations in Finland, and their authors become political sensations for the right-wing Holocaust-revisionist politicians and their “platform of Prague” that receives its funding from Brussels and Strasbourg. . . 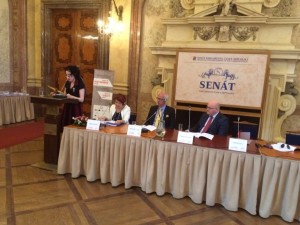 A Finnish fiction writer is hero for an EU funded double genocide conference in Prague.

Defending History hosts a section on the Prague “Platform” and another on Double Genocide more generally.