This week has seen a further public and, in most assessments, vitriolic attack, from the president of the (Prague-based) “Platform of European Memory and Conscience,” the European Union financed body responsible for “enacting” the 2008 Prague Declaration, against one of its own founding constituent members, the (Prague-based) “Institute for the Study of Totalitarian Regimes.”

This week’s attack on a Prague-based institute by a Prague-based platform, featured on the Platform’s website, and in a PDF posted on the site, follows by around half a year an earlier broadside, around a half year ago, in August 2013, in which the institute was accused of including members who were once involved with Communist rule in Czechoslovakia, a situation called “analogous” — in classic Double Genocide parlance — to inclusion of former members of a “Nazi party.” In other words, the assumed ethical identity of a Holocaust-era Nazi to even a late 1980s Communist in the days of Gorbachov is taken as a kind of sacred given. While academic studies of Nazism and Stalinism have long been legitimate, the Prague Declaration declares the equivalence of Hitler’s Third Reich to communism in general.

The Platform’s home page still features (at bottom right) the 2008 Prague Declaration itself, which features the word “same” five times in its demands for red-brown absolute equality in the history of Europe.

The Platform’s constituent members include the Vilnius-based “International Commission for the Evaluation of the Crimes of the Nazi and Soviet Occupational Regimes in Lithuania.” The red-brown commission, as it is known for short, regularly denies any adherence to “Double Genocide” though it features the Prague Declaration on its own website and is involved in ongoing disparagement of Holocaust survivors who dare speak up with opinions rejecting the equalization of Nazi and Soviet crimes. In late 2013, Defending History issued an appeal to conscience to the commission’s members, now including prominent Israeli and American members who may not be fully informed of the network of Double Genocide institutions in which the commission plays a prominent role.

In some instances, the Platform’s partners and members have been involved in glorifying Nazi collaborators on the grounds that they were actually “anti-Soviet heroes.” In Lithuania matters reached the converse: the branding of anti-Nazi resistance fighters (in practice only Jewish Holocaust Survivors) as supposed suspects of war crimes.

The platform also includes allegedly antisemitic partners, such as the Genocide Center in Vilnius, which provides the texts for museums and theme parks that feature blatantly antisemitic materials. 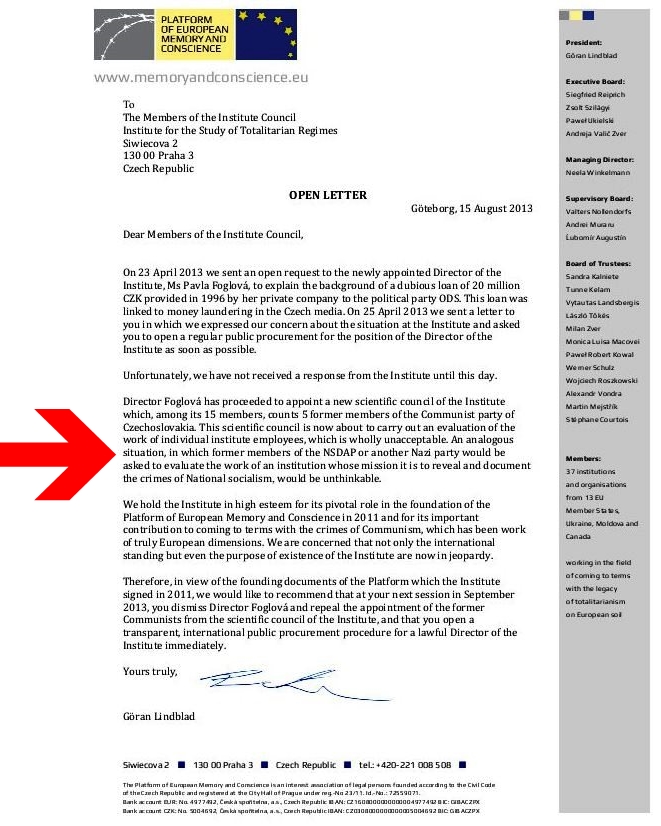