Gruto Parkas (situated at Grutas, near Druskininkai and often popularly called ‘the Lenin Park’) is a private enterprise, but a large sign near the entrance boasts that the historical inscriptions were donated by the state-sponsored ‘Genocide and Resistance Research Centre of Lithuania’.

THE QUESTION: Can you imagine a major theme park dedicated to the history of the Soviet period, in a member state of the European Union and NATO, that tries its best to present Soviet Communism as a largely Jewish enterprise? With a presentation in the spirit of a most infamous brand of 20th century antisemitism? That singles out by nationality only Jews among the many ‘rogues’ featured in its exhibits? That defames the memory of Holocaust Survivors who escaped Nazi ghettos to join the anti-Nazi partisans in the forests of Lithuania? And all this, without once mentioning the Holocaust . . .

THE ANSWER: As in the case of the Genocide Museum in the center of Vilnius, the Double Genocide Industry’s lamentable Double Game is in play here. While trying to convince the European Parliament to adopt the 2008 Prague Declaration and other legislation that would ‘equalize’ Nazi and Soviet crimes as a matter of European law, the domestic agenda in the Baltics stresses Soviet crimes alone. This in turn is pursued in conjunction with the perpetuation of old antisemitic canards about a Jewish-Bolshevik nexus. Along the way, there is a  wholesale deletion of the Holocaust from history. This is accompanied by attacks on Holocaust Survivors: the tiny percentage of Jewish citizens who escaped the ghettos to join the anti-Nazi partisans in the forests of Lithuania. Heroes of the free world, they are reviled by the local antisemitic establishment.

The state-sponsored smear campaign against Jewish partisans (which has grown to include attempts by state prosecutors to prosecute Holocaust survivors who joined the partisans to fight the Nazis), is evident in the historical placards provided to the theme park over a decade ago by the Genocide Research Center. It is stated incorrectly that most of the Soviet partisans were Jewish. There is moreover no mention that the Soviet partisans were the only local force effectively fighting the vast Nazi military machine (there were no American or British forces in this part of the world). Those who did fight the Nazis are collectively called saboteurs. Moreover, it is nowhere mentioned that the Jewish partisans were Holocaust survivors who had escaped the Nazi ghettos (and certain death), and whose families perished at the hands of the Nazis and their enthusiastic local killing squads. In fact, the Holocaust is not once mentioned on the premises.

The placard entitled ‘Underground Soviet Partisans’, which fails to make clear even that the partisans were fighting Hitler and the Nazi army, contains the following summary of the partisans’ composition: ‘Soviet activists, Red Army men, escaped prisoners of war and some inhabitants of Lithuania (mostly of  Jewish nationality) formed groups of saboteurs. Half of the members of groups were people sent by the “center”. Native people didn’t support Soviet partisans […]’ 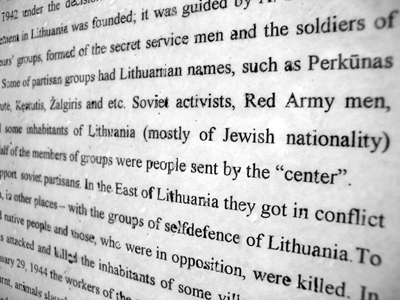 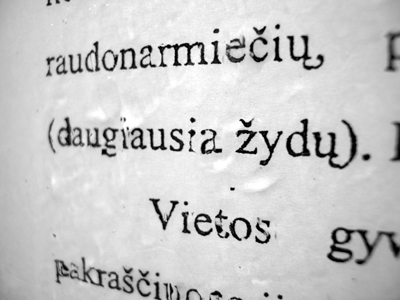 ‘THE TRADITIONAL JEWISH COMMUNISTS’ INFLUENCE UPON THE LITHUANIAN COMMUNIST PARTY’: The placard dedicated to one Icikas Meskupas-Adomas includes the text: ‘After LCP [Lithuanian Communist Party] became the support of occupational regime during the occupation of Lithuania, he worked as the Second Secretary of LCP CC. In 1940-1941 he guided the Lithuanian officials clearing (cleaning), seeked to keep the traditional jewish communists influence upon LCP [sic]’

Where the nationality or ethnic origin of a ‘bad guy’ in the theme park’s narrative might be in doubt (i.e. not immediately evident from the surname), it is generously supplied for the convenience of the families visiting the tourist park’s facilities. Here, the text starts: ‘R. Čarnas was born in Kaunas. Nationality – Jewish’ . . . 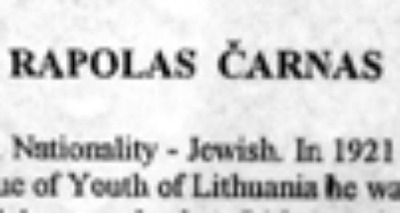 Another example is the duly weathered placard on Icikas Meskupas-Adomas (who ‘finished the Jewish high school in Ukmerge’ ).

The perceived need to impart to the fun park’s visitors the ethnicity of ‘bad guys’ featured does not extend to cases involving non-Jewish persons, even when their surnames betray non-Lithuanian origins. For example, J. Greifenbergeris who simply ‘finished a high school in Smolensk’ . . .

One of the ideological posters (done in a rather Soviet style) that welcomes visitors to the theme park makes clear the enterprise’s view of itself: The poster equates this theme park’s exhibition of 2000 with the Nuremberg Tribunal of 1946. This curious obsession also eventually worked its way into the 2008 Prague Declaration which demands that Communist crimes be judged by the European Union ‘in the same way Nazi crimes were assessed by the Nuremberg Tribunal’. 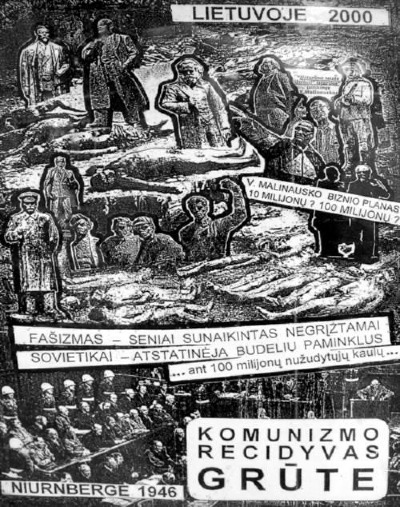 Gruto Parkas signs and placards were contributed by the Genocide and Resistance Research Center of Lithuania in Vilnius. Its Vilnius headquarters stands at the corner of one of the gates of the (‘small’) Vilna Ghetto, where thousands of the city’s Jewish citizens were incarcerated in preparation for genocide. In fact the building stands flush to sections of Stiklių (Yiddish Glezer gesl; ‘Glazier Street’) on both sides of the ghetto gate. But this  ‘detail’  is not marked on the building, and seems not to be of interest to the Genocide Center that now stands here, at the very demarcation line between the city’s free people, and those beyond the gate who were slated for genocide in 1941. See the page on the Genocide and Resistance Research Center for more information and images.

‘The owner of a Lithuanian press accreditation card for almost a decade, my trip to Gruto Parkas to take these photographs marked the first time I’ve ever been able to use it inside the country to gain access to a place without paying. Handy for freebies in Poland, Germany, the UK and other countries where freedom of the press is taken for granted, the Gruto Parkas incident rapidly illustrated that all is not what it seems in Lithuania. Whilst press accreditation card owners are generally waved through without a second thought in modern democracies, I was alarmed to see the details of my card being entered into a book inside the park’s ticket office before I was allowed inside. An understandable albeit mildly disturbing formality in, say, Belarus or North Korea, this kind of behaviour only served to reinforce a growing awareness of the increasingly sinister goings-on in a country that’s, let’s not forget, a member state of the European Union. The irony of my details being written down in a place whose sole reason for its existence is to show the evils of a repressive regime would I’m sure be entirely lost on the locals.’